Is my house underneath a flight path?

If you often hear and see aircraft from your house, there’s a good chance you live under a flight path to and from the runways at Schiphol. But do you know which route is associated with which runway(s)? Read on to find out everything you need to know about the runways and routes the aircraft use.

Aircraft coming in to land on Runway 18L-36R circle directly above Bodegraven-Reeuwijk and Nieuwkoop before descending over Uithoorn and Aalsmeer and landing at Schiphol. Before the landing aircraft turn towards Nieuwkoop, they fly higher on the approach from an easterly direction over Weesp, the municipality of De Ronde Venen and Woerden. From a westerly direction they fly over Katwijk, Leiden and Alphen aan den Rijn. 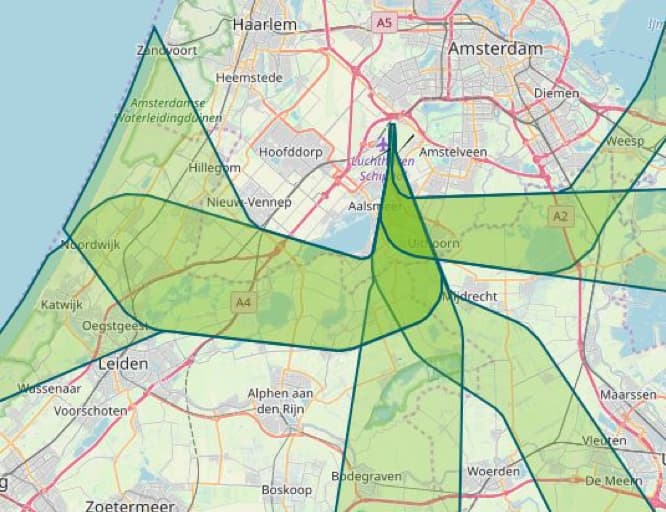 Taking off from Runway 18L-36R

Aircraft that take off from Runway 18L-36R climb above Aalsmeer and Uithoorn, then:

Aircraft coming in to land on Runway 09-27 approach above Almere and Weesp and descend over Diemen and Buitenveldert (Amstelveen) and the Amsterdamse Bos recreational area, before landing at Schiphol. 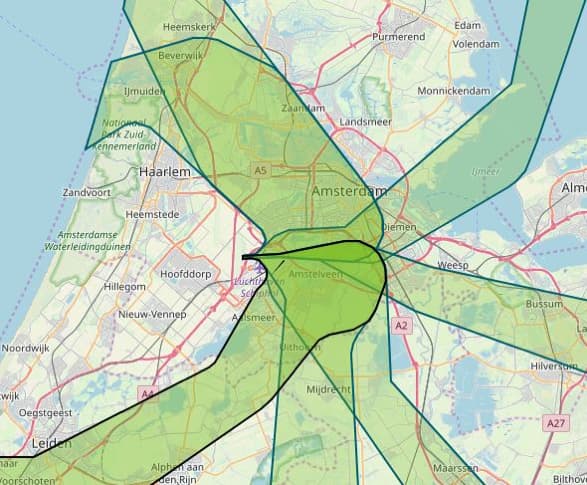 Departing aircraft ascends over Buitenveldert, then:

Aircraft coming in to land on Runway 06-24 approach from the North Sea or circle around to follow the A4 motorway, directly above Katwijk, Noordwijk and Oegstgeest. They descend further at Nieuw-Vennep before landing at Schiphol. Before the landing aircraft turn towards Runway 06-24, they fly higher on the approach from an easterly direction over Diemen and Hoofddorp. From a south-westerly direction, they fly over Leiden. 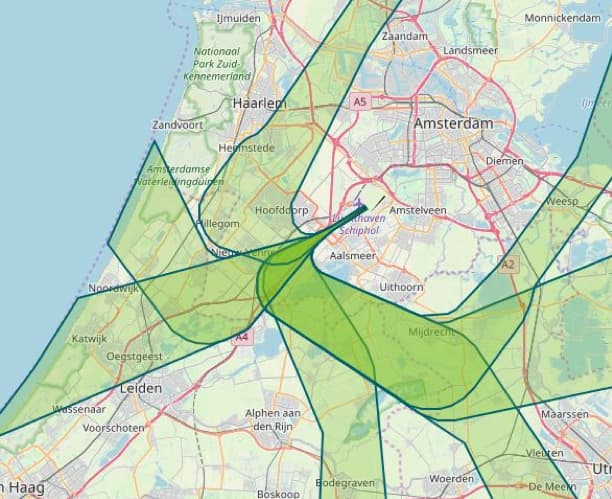 Departing aircraft ascend over Nieuw-Vennep, then:

Aircraft coming in to land on Runway 18R-36L approach from the North Sea or circle around over the sea above Castricum and Heiloo. They then turn above Uitgeest, Heemskerk and Beverwijk, descend above the A9 motorway, Spaarndam and Haarlemmerliede and finally land on the runway by Vijfhuizen. Landing air traffic almost always approaches over the North Sea, apart from aircraft coming in from the east, which fly over Hoorn and Heerhugowaard towards the North Sea. 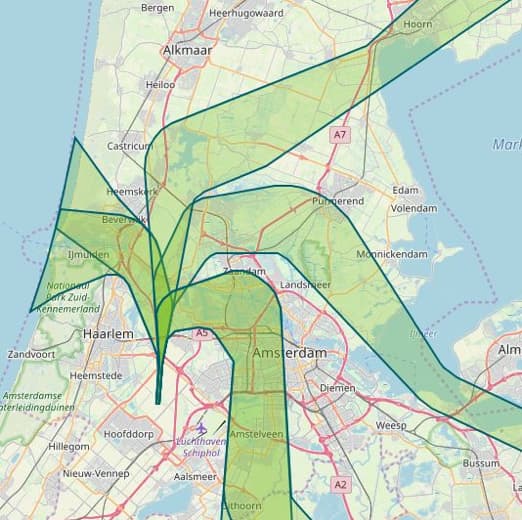 Taking off from Runway 18R-36L

Departing aircraft ascend over Haarlemmerliede and Spaarndam, then:

Aircraft coming in to land on Runway 18C-36C from a northerly direction approach from the east above the Beemster and Wormerland. Above Alkmaardermeer they then turn towards the south, descend over Wormerveer and Assendelft and fly over Halfweg and Zwanenburg before landing at Schiphol.

The air traffic coming from the south to land on Runway 18C-36C almost always comes from the direction of the North Sea over Leiden, towards Boskoop. There the aircraft turn towards the north, begin their descent over Zwammerdam and Aarlanderveen and fly over the Westeinder Plassen and Aalsmeer before landing on Runway 18C-36C. 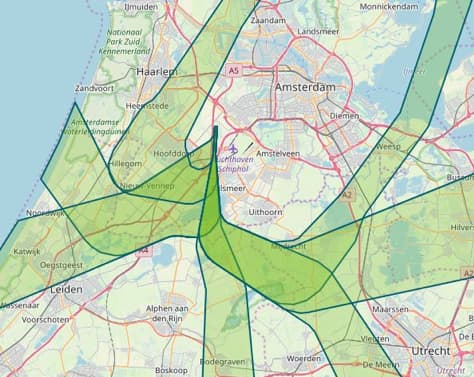 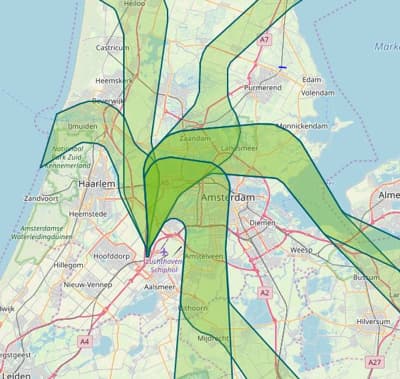 Taking off from Runway 18C-36C north (left) and south (right)

Departing aircraft ascend in a northerly direction over Zwanenburg and Halfweg, then:

Departing aircraft ascend in a southerly direction over Aalsmeer, then:

In the event of a south-westerly storm, aircraft may land on Runway 04-22. In that case, air traffic approaching from the direction of Monnickendam will fly quite low over Amsterdam city centre and descend over Oud Zuid and the Nieuwe Meer before landing at Schiphol. 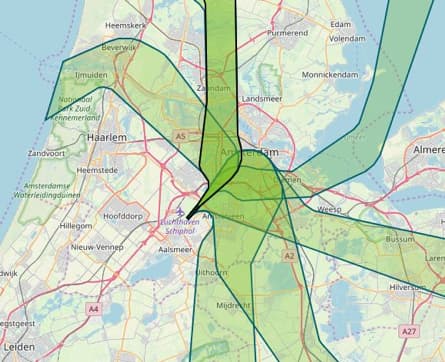 Departing aircraft ascend over the southwest of Amsterdam, then:

Would you like to track air traffic in real time? Take a look at Schiphol Flight-tracking.

On our way towards less nuisance (1)

To keep the six runways safe and in good condition, we regularly perform maintenance and other works. Find an overview on this page.

Why does the airport cause noise nuisance?

As you know, aircraft engines make noise once they are started, and the closer you are to the source the louder the noise will be. This isn’t usually an issue for people who work with aeroplanes or passengers waiting to fly, but we understand that when you haven’t chosen to be confronted with this noise, it can be a problem. At Schiphol we consider aspects like weather conditions, we also think about the noise that different types of aircraft produce when we’re deciding which take-off and landing runways to use at various times during the day. Find out which runways are currently in use at Schiphol.