Flight paths and runway use: How we deploy our runways

If you live or work near Schiphol or beneath the airport’s flight paths, you can check which runway is in use at any given moment. Schiphol and Air Traffic Control the Netherlands are bound by many rules and agreements about which runways they decide to allocate for take-offs and landings. Both parties work together to ensure that air traffic is as safe as possible and that we limit any inconvenience for you.

Decisions about which of Schiphol’s runways to use at a given moment depends on weather conditions and runway conditions, as well as the agreements made with both government and our neighbours. Two runways are in use at Schiphol at all times. One is for departing planes, and the other for arriving planes. During peak times, when a lot of aircraft are taking off or landing, a third or even a fourth runway may be brought into use.

Five long runways, plus a short one

Schiphol has five long runways that are used for international air traffic. The runways have been laid out facing a variety of wind directions to maximise the probability that aircraft will be able to take off and land.

In addition to these five runways, Schiphol also has Runway 04-22 (Schiphol-Oostbaan). That runway is shorter and used mainly for General Aviation, private jets and helicopters. Air Traffic Control the Netherlands can bring this runway into use for international air traffic, where necessary. See which landing systems Schiphol runways have here. We understand that you don’t want to be disturbed by low-flying aircraft while you’re fast asleep. That’s why we restrict take-offs and landings between 23:00 and 06:00 to a single take-off runway and a single landing runway. They are usually Runways 18R-36L (Polderbaan) and 06-24 (Kaagbaan). Night flights also take different flight paths to reduce the inconvenience they cause. Runways 18L-36R (Aalsmeerbaan) and 04-22 (Schiphol-Oostbaan) are not used overnight, and Runway 18C-36C (Zwanenburg) is only used for south-facing take-offs. We only deviate from this arrangement in emergencies, when safety is of the utmost importance.

Our runways receive regular maintenance to keep them in good condition. This can mean that a runway is unavailable for use by air traffic. That situation has an impact on runway use and flight paths because Air Traffic Control the Netherlands will need to direct aircraft to other runways. We do our best to ensure that this runway maintenance takes place during quieter periods, wherever possible. For example, maintenance is performed on the runways at night or when a runway can’t be used due to strong winds. Here you can see the schedule for runway maintenance and other works that affect runway use. 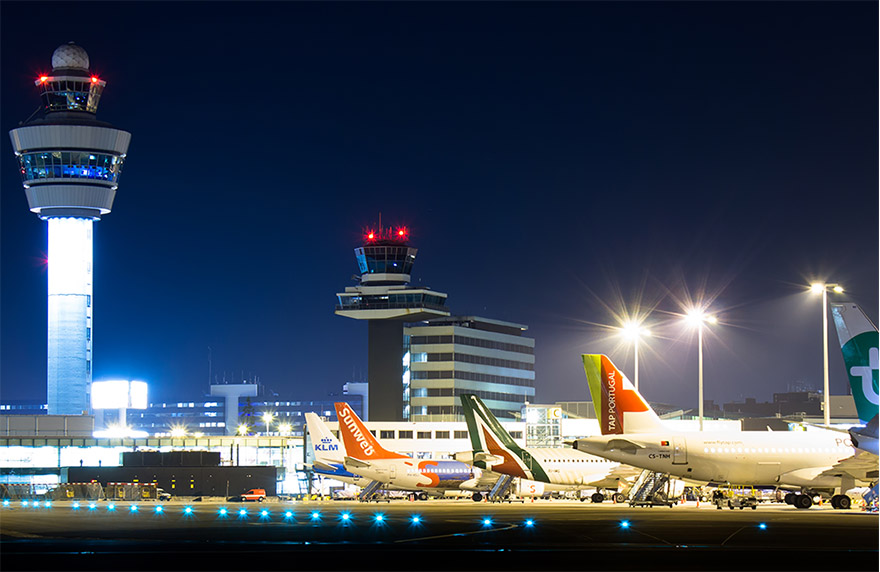 Schiphol, the government and residents in the vicinity of the airport have made agreements about runway use, and the number of permitted flights to and from Schiphol. We will use as few runways as possible that would cause noise disturbance for relatively lees people, and not use more runways than strictly necessary. We will take these agreements and environmental rules into account when we deploy runways: noise, emissions and external safety. We prepare a usage forecast report prior to the new year in order to map-out the expected runway use for the year. We will evaluate the usage forecast for the previous years’ flights in February. These reports will then be discussed with local residents, stakeholders and the government.