Whether you want to travel to Rio de Janeiro, Vancouver, Tokyo, Nairobi or Tel Aviv, you’re in the right place at Schiphol. From Amsterdam, you can fly direct to almost three hundred destinations across the globe. That makes Schiphol the best connected airport in Europe, and number five in the world. How can a country as small as the Netherlands have so many connections to international destinations? 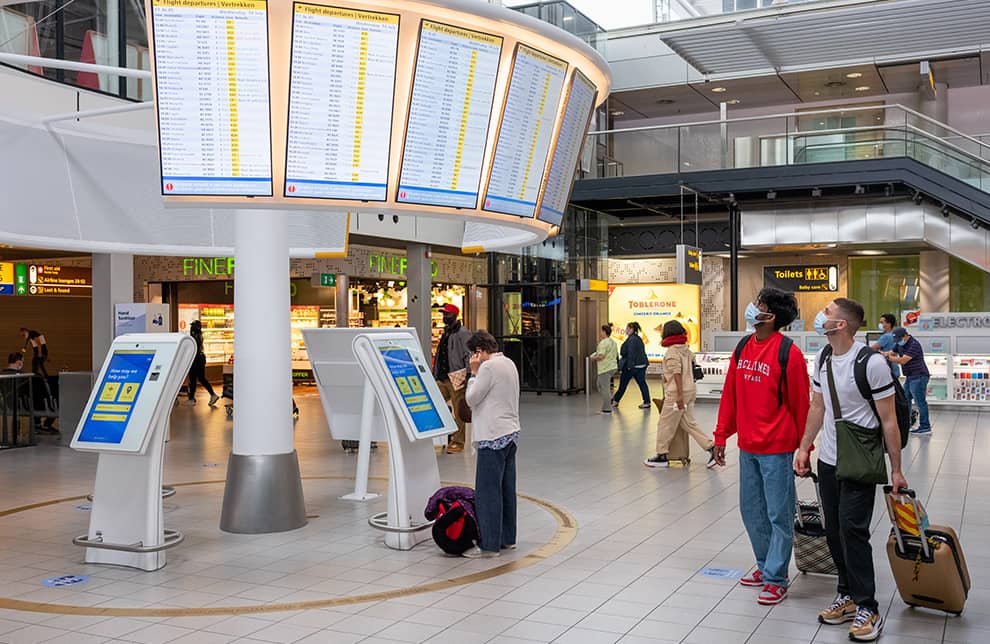 The hub function of Schiphol

That has to do with Schiphol’s hub function. A hub can be seen as the centre of a network. You can imagine that for some destinations there aren’t enough passengers from the Netherlands to fill an entire plane. The same applies to other countries. It wouldn’t be very efficient if airlines only transported a few people from every place, which is why you bring them together. It’s convenient if all those passengers can gather at once central location: the hub.

That’s also why there are so many international travellers at Schiphol. In addition to the people travelling to and from the Netherlands, there are a lot of transfer passengers. Our airport is a popular place for transfers due to there being so many direct destinations from Schiphol. And because of those transfer passengers from all over the world, we’re attractive to airlines. They’re able to fly to many more destinations than if they only took passengers from the Netherlands with them.

Our airport is easily accessible by train too. Travelling by train can be a great alternative to short-haul flights within Europe, like Brussels, Paris, London, Dusseldorf, Frankfurt and Berlin. In 2020, KLM replaced one of its five daily flights to Brussels with the Thalys train. So, for example, someone travelling from Brussels to Hong Kong can first take the train to Schiphol and then fly from here. The Ministry of Infrastructure and Water Management is working together with Schiphol, ProRail, KLM and NS to make international train travel even more appealing, so that more and more people combine travelling by train and plane.

The strong network has more advantages than just enabling travellers to reach their holiday destination quickly and easily. Take companies that want to transport their goods, for instance. They can also get to their destination directly from Schiphol. In 2021, more than 1.67 million tonnes of cargo were transported via the airport. And it is also convenient for international companies to be located near an airport that is easily accessible from all over the world. This creates jobs and makes Schiphol an attractive location for companies to base themselves. There are more than one thousand companies and organisations at and around the airport, employing approximately 62,000 people.

Schiphol is still dealing with the consequences of the COVID-19 pandemic. Passenger numbers have gone down and there are fewer destinations. In time, we want to fully restore our network, together with the airlines and other partners. It goes without saying safe and responsible travel is and will continue to be our point of departure.