Written by Dirk Bresser and Simon Prent: What is sustainable taxiing? (Part 2)

In our previous blog we described the difference between on-board systems and ground-based systems. In fact, these are two different technologies that are used to propel an aircraft when it is taxiing. In this blog, we introduce a third dimension into the mix – the control system. The introduction of that extra dimension creates a comprehensive, future-proof operational concept. By this means, we make sustainable taxiing an even more appealing prospect. This blog explores some options for fleshing out this concept.

Whether on-board or ground-based propulsion systems are being used, the pilot always has manual control of the aircraft. However, there are sustainable taxiing concepts in which a system controls the aircraft while it is on the ground, in much the same way as it is controlled by an autopilot when in flight. This is known as an ‘autonomous’ system.

If we compare these technological concepts, we get the following framework: 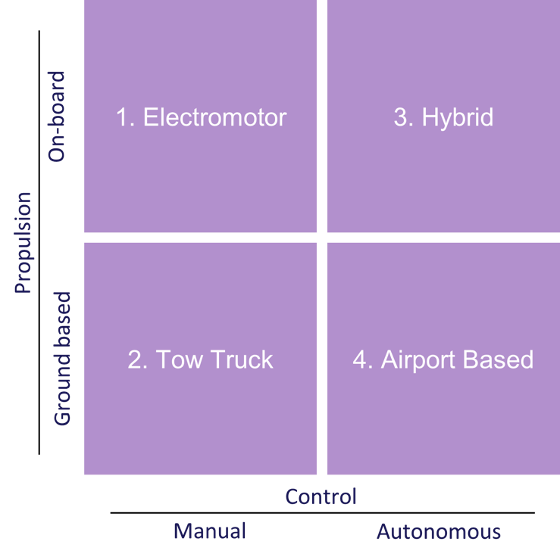 In theory, both of these concepts are already feasible. As yet, however, they only exist on paper or as prototypes in a test environment. So we are going to have to call upon your powers of imagination. This is because we will be outlining a future-proof operational concept: At Amsterdam Airport Schiphol, we have set ourselves the goal of significantly modifying our airside operations by 2050. By then, our goal is to have replaced all vehicles with an interconnected fleet of self-driving (autonomous), zero-emission vehicles and to have automated all of the associated processes. Aside from sustainable taxiing, this would involve aspects such as baggage transport and passenger transport. In this way, we plan to make our airport more sustainable, while giving an added boost to our capacity and safety.

First, we would like to tell you a little more about ‘Hybrid systems’ and ‘Airport-based systems’.

By ‘hybrid’ we mean a combination of on-board propulsion and on-board control. Both concepts can either be integrated into the aircraft (prior to delivery) or they can take the form of separate and distinct modules. One option would be Wheeltug in combination with an autonomous control system. We are all familiar with Wheeltug, it is the control system that is new.

These days, aircraft controls are being increasingly automated. One example is Airbus’s ATTOL (Autonomous Taxiing, Take-Off and Landing) concept. In this concept, aircraft will ultimately be able to move completely automatically, indeed various practical trials have already been carried out. You could compare this to self-driving cars.

We use the term ‘Airport-based systems’ to mean systems in which both propulsion and control take place at the airport. This is in contrast to ‘Hybrid systems’, in which these are both managed within the aircraft itself. These systems are designed to improve sustainability, while at the same time boosting capacity and safety.

There are currently two concepts of this kind:

First of all, there is the Aircraft Towing System (ATS). This is a system of small, computer-controlled platforms that engage with the aircraft’s nose wheel. These small platforms tow the aircraft to and from take-off runways, taking an optimum route and travelling at an optimum speed. One major drawback of this concept is that all of the taxiways will first need to be modified. It also entails some loss of flexibility.

That is why we designed our own concept at Schiphol. The ‘Tow Only Airport’ or, in other words, an airport where all of the aircraft are towed. In this concept, the towing is done by automated robots. While the end result is comparable to ATS, no major infrastructural changes are needed. You don’t have to compromise on flexibility. This concept can best be compared to autonomous container trucks, such as those operated by APM Terminals Rotterdam in the Port of Rotterdam. In an upcoming blog, we will discuss ways of handling aircraft that cannot be towed. We will also provide further details about what exactly is meant by the term ‘Tow Only Airport’.

So the goal is to make our airside operation fully autonomous by 2050. Sustainable taxiing is a big part of the transition to an autonomous airport. We have previously listed the benefits of sustainable taxiing (in terms of fuel savings), and we have explained why taxiing on one engine is not exactly an ideal alternative. The implementation of a concept like this involves a number of constraints. By combining automation and sustainable taxiing, we can eliminate all of these constraints at one go. In addition, the sum total of all these benefits makes the concept even more appealing.

Ways in which sustainable taxiing, or taxiing without using the aircraft’s engines, can help:

Ways in which automated sustainable taxiing, or transferring control to a computer, can help:

The above list is by no means exhaustive. Try to picture a fully autonomous and automated airside operation as a relatively simple logistics system that only processes 750 parcels per day. By DHL’s standards, 750 parcels is a vanishingly small amount...