Now that we have talked in detail about what sustainable taxiing is, the benefits it brings and how we can implement this innovation (part 1 and part 2), it’s time to discuss the practical details. We carried out a Taxibot trial at Schiphol between March and August 2020. In this blog we tell you how that went and what we learned from it. 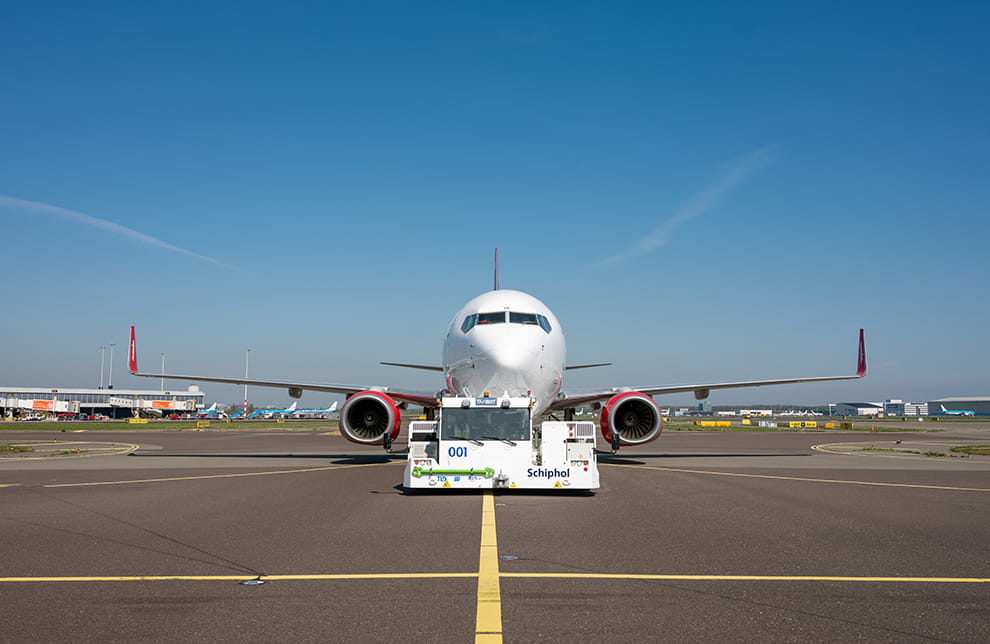 The Taxibot is a special kind of tow vehicle that is able to tow aircraft to and from runways at high speeds. It is the only certified technology for sustainable taxiing on the market. The Taxibot can be used to tow the most common aircraft types: the Boeing 737 and the Airbus A320. The tests at Schiphol were done with Boeing 737s (700 and 800).

Starting is the hardest part

On 2 March 2020, after months of preparation, the Taxibot could finally be hoisted onto the back of a lorry. Our supplier in France was in charge of training the pushback drivers and pilots. The pushback drivers learned the theory and went through extensive practical training on location, albeit three weeks later than planned. Before the first driver was about to start their training, coronavirus broke out and the borders with France closed. All kinds of possible setbacks had been taken into account, but a pandemic wasn’t one of them. Of course, health and safety was top priority and so we first had to be sure about how we could proceed safely. The training could eventually be continued over the phone and by adopting the ‘train-the-trainer’ model. This was a great example of how we worked together on this project – one driver trained all the other drivers, even though they worked for a competitor!

Testing during the pandemic

The advantages of testing during a pandemic soon became clear. While preparing for the project, it was assumed that this would be a busy period at Schiphol. In reality, the airport grounds were almost empty at the start of April. As a result, we were able to carry out more than 170 tests over more than 25 test days. We mainly tested all the various uncoupling points, but we also tested in the dark, used the Taxibot during KLM de-icing training and carried out extensive noise measurements. Because of coronavirus, we were able to train, test and measure at a quiet airport. Moreover, we could draw conclusions very early on – something that would have been unthinkable in different circumstances. There was a significant disadvantage to this relative calm: a lack of test flights. This meant we only brought 8 aircraft to the runway in this fuel-saving manner. We compensated for that by doing a lot of ‘dry’ testing, and so the desired results were achieved. Again, the flexibility and commitment of all partners meant that the coronavirus crisis never gained the upper hand in the project.

We learned an incredible amount doing these sustainable taxiing tests. We were able to narrow down and confirm fuel savings of 50-65% when compared to the standard taxi procedure, which is also partly because aircraft engines need to warm up before take-off. Furthermore, local emissions (of ultrafine particles and noise, for example) are greatly reduced. Carbon and nitrogen (CO2 and NOx) emissions are also 50-65% lower.

Although it is possible to implement sustainable taxiing at Schiphol, there are currently more than 30 prerequisites that are not yet being met. The most important ones are:

While carrying out the Taxibot trial, we also worked on a simulation in which all departing aircraft taxied sustainably in a busy Schiphol operation. We’ll talk about this in more detail in the next blog. The conclusions of this trial have been elaborated in a feasibility study, done together with all our partners and using their unique expertise. This year, we started developing a roadmap in which we look at how the prerequisites can be met and at how we can make further progress. The next trial, starting early next year, will be part of a European project that will see several Taxibots come to Schiphol. The preparations are already underway. We are therefore on track to reaching our goal of making sustainable taxiing standard procedure at Schiphol in 2030.