The icy ingenuity behind flying in snow

After a few weeks of wonderful weather, it looks like it might snow at Schiphol on Thursday 31 March and Friday 1 April. It might look pretty, but it also means a lot of hard work to keep the runways open and to remove snow and ice from the aircraft. Will you be flying in the snow? Read all about what you can expect as a traveller. 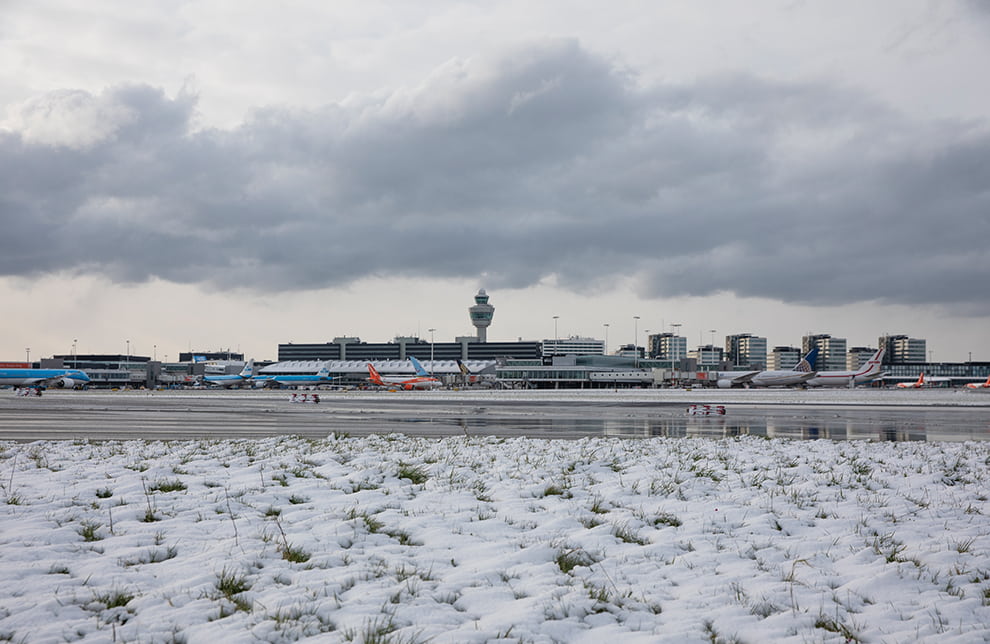 The aircraft you’ll be flying in can easily handle icy conditions. The temperature can be as low as -50°C at an altitude of 10 kilometres. That can be seen when ice crystals form on the windows of the plane. However, the window in the cockpit has special heating elements so that it cannot freeze over. Just as well, because it won’t do to send a pilot outside with an ice scraper!

Ice on the wings

The trickiest part about wintery weather is ice formation on the wings. When this happens, the airflow over the wings changes. That has a negative effect on the way the plane flies and so the pilot will do everything they can to keep the wings ice free. That can be done in a variety of ways during a flight, depending on the aircraft type. One example is using warm air from the aircraft engine. And some planes have a piece of rubber on the front of the wing that, when popped out, causes the ice to break and fall away.

De-icing on the ground

When it snows at Schiphol, planes go through a whole process before they’re allowed to depart. All snow, ice or frost is removed from the aircraft during de-icing. We do that by injecting the plane with a mixture of glycol and warm water at a temperature of around 75°C. This melts the ice and the glycol ensures that the plane doesn’t immediately freeze again, meaning it can take off safely.

But the aircraft must also be able to use the runways. Our snow fleet, made up of 30 snow ploughs, is on standby at the first sign of snow at Schiphol. They work to clear all the snow from the runways, as well as from the platforms and gates so that planes can taxi. We call the drivers of the snow ploughs polar bears. These are actually Schiphol employees who usually work at the office but who operate the snow fleet when there’s wintery weather. The colleagues from Aircraft Operations, who normally work on airside, for example as a marshaller or bird controller, lead the team of polar bears.

It takes the snow fleet around 20 minutes to clear the runways of snow. Your departing flight could therefore be slightly delayed or leave later than scheduled if snow still needs to be removed from the runway. And if snow is expected when you are due to land at Schiphol, your return flight may be delayed. Sometimes your plane has to fly a waiting pattern because the runway is still being prepared. In very heavy snowfall, your flight may even be sent to an alternate airport.

If you are flying to or from Schiphol on Thursday 31 March or Friday 1 April, keep an eye on the latest flight information or get in touch with your airline.