Polar bears in the snow at Schiphol

You come across all sorts of things at Schiphol. Polar bears, for example. No kidding! When it snows and in freezing conditions, you might just see them in action at our airport. Not the white, furry kinds that live near the North Pole though – we have our own special polar bears. They keep the runways free of snow and ice so that aircraft can continue flying in wintery weather. 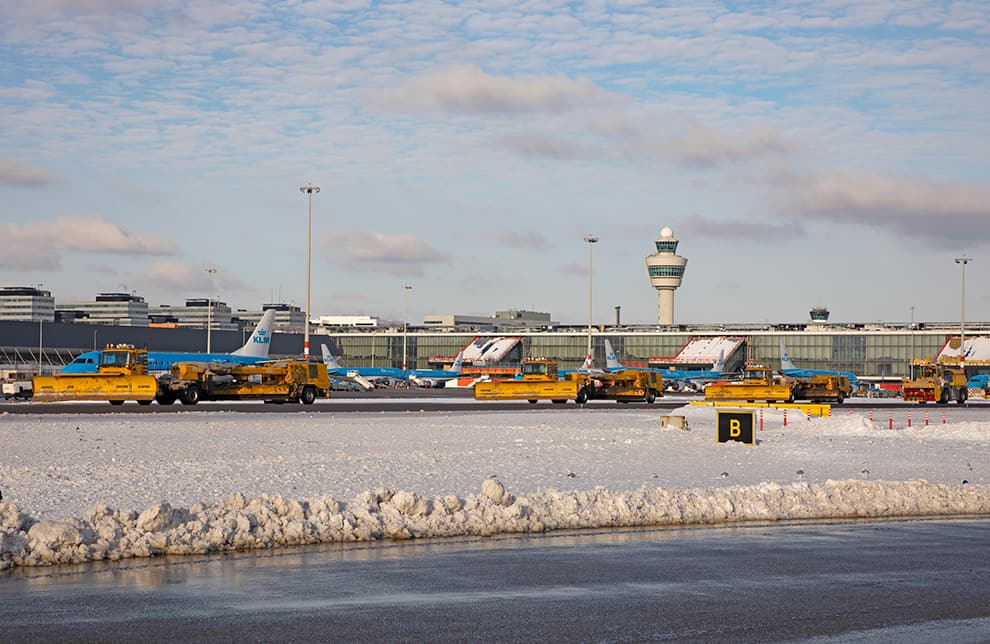 Snow? We carry on flying!

Our polar bears are colleagues who help Aircraft Operations staff when it snows, so that planes can continue to land and take-off at Schiphol. They normally work at the office, but from mid-November to mid-April they are on standby and ready to spring into action as polar bears whenever necessary.

Shovelling snow from the runways

As soon as snow is forecast, they are summoned. Two teams shovel snow from the runways using fifteen vehicles. A third snow fleet ensures that the aircraft stands (where the planes park next to the gates) are clear of snow. In addition to the polar bears, we also ask Airport Operations staff to help out. These are employees who usually work as marshallers or bird controllers, for example, but who lead the teams of polar bears when they are deployed. They can work shifts of up to 12 hours in order to make sure everything runs smoothly.

You can't just get into one of those huge yellow snow trucks and drive away. That's why our polar bears get extensive training before winter arrives. Along with learning theory, they learn how to drive the big snow-sweeping vehicles. They also practice driving in formation with the whole snow fleet. In doing all this, they are well prepared and can get straight to work as soon as it snows.

Colleague Mitchell is one of our polar bears. He usually works as IT process manager at the office. However, in 2021 – when it was really cold and there was heavy snowfall – he took on the job of polar bear and joined a whole team to help clear snow from the runways. Watch this video to see what that was like.