The first ten of the new security lanes in Departure Hall 1 will open at the beginning of December 2020. Menno Kuiperij is the Security Process Developer responsible for coordinating the design and execution of this challenging project. 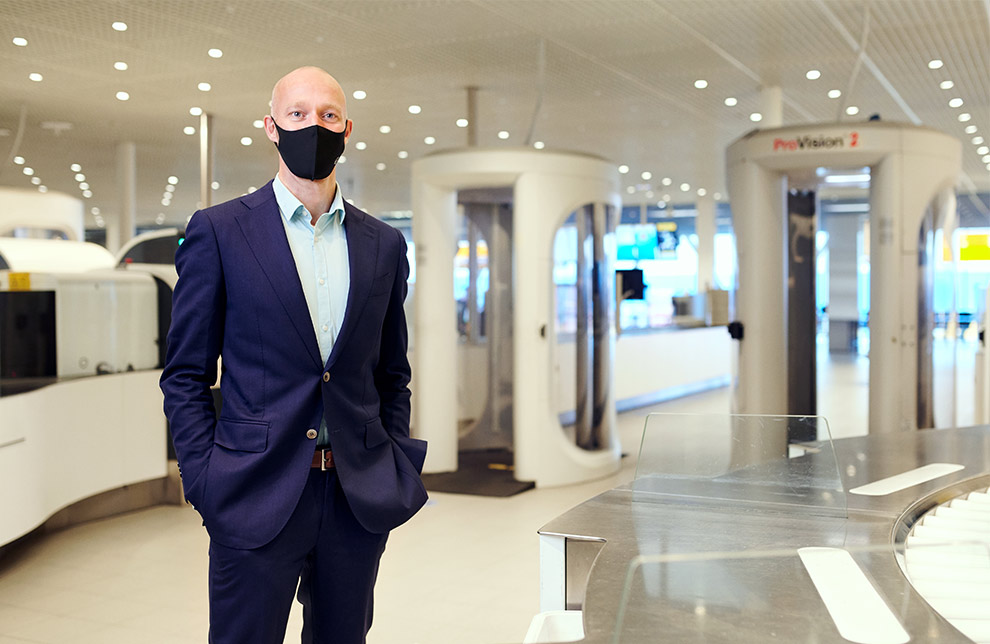 The new security lanes in Departure Hall 1 mean that security checks at Schiphol can be conducted more safely and efficiently. The first ten lanes will open at the end of this month. The remaining eleven lanes will open in phases up until May 2021.

‘This is a major change, not only for passengers but also for security personnel,’ says Menno Kuiperij, who is facilitating, coordinating and monitoring this project from the design phase through to the execution phase. That’s quite a challenge, because all the work is being done while the departure hall remains open.

The new security lanes are located in a new purpose-built mezzanine area. ‘Departure Hall 1 is the oldest section of the airport, and the original architects weren’t anticipating that one day a mezzanine floor would be added. So we’ve come up against all kinds of unforeseen issues, such as asbestos and areas that were not even shown on the construction plans.’ Nevertheless, Menno is more than happy with how the project has gone – it has been like a giant jigsaw puzzle, requiring a great deal of adaptability and lateral thinking from all the internal and external stakeholders involved.

And not only that – the coronavirus pandemic has also thrown up all kinds of additional challenges. ‘There are fewer passengers, of course, but that doesn’t mean that we’ve been able to carry out our work completely undisturbed. During the project, we’ve had to follow the guidelines of the RIVM, and we’ve also had to cope with some of our contractors becoming infected in the workplace.’

The layout for the new mezzanine area also has to comply fully with public health guidelines. For example, protection screens have been added in several locations, and there are stickers to remind passengers of the need for social distancing. Only the odd-numbered lanes will open to start with. As the number of travellers increases and more security capacity is needed, the even-numbered lanes will be opened in phases.

From X-Ray to CT scanning

‘We also have to comply with the laws and regulations relating to civil aviation security, and all our designs and implementation plans are continuously assessed against these. We want to make the passenger journey as pleasant as possible, but ultimately the task of security is for everyone to fly safely.’

One of the new requirements for the new security area was hand baggage checks using CT scans. Previously, all baggage was checked using X-Ray technology. ‘But the big disadvantage of X-ray machines is that passengers need to remove large electronic equipment and liquids from their bag, because otherwise they couldn’t be checked properly. With the new CT scans, that will be a thing of the past and you’ll be able to leave everything inside your hand baggage.’ That means shorter queues and a better flow of passengers.

Another major advantage of the new security lanes in Departure Hall 1 is the direct connection with the security gate in Departure Hall 2. ‘Previously, the two security gates were physically separated from each other. As long as everything is running smoothly, that isn’t a problem. But if there is an issue of some kind, such as a technical problem in one or more security lanes or an unexpected influx of passengers, it would be preferable if those passengers could get through the security control quickly and easily via the other departure hall. And ideally, you’d want them to have a direct route to the correct terminal, not be sending them the long way round.’

In the new situation, the security gates for Departure Halls 1 and 2 are directly connected. That allows both gates to ‘borrow’ capacity from each other when necessary. After the security check, passengers can still follow the correct route to the gate without any problems.

The design not only seeks to ensure convenience for travellers, but also to enhance working conditions for staff. ‘We have created a new lounge where staff can relax during their breaks. There is plenty of space to sit in comfort, with USB charging points, power points for your tablet, laptop and telephone as well as a full pantry.’

The colours and materials used in this area were chosen to create a relaxing environment: soft sand-coloured tones combined with warm blues, which should ensure that security personnel can truly relax there. ‘The work done by security staff is very intensive. You never know in advance if a situation is suspicious or dangerous, and you have to be constantly alert.’

So everything and everyone has been thought of in the design for the new security area. ‘We were bursting at the seams before, but using the limited floor area we had, we have still managed to make space for future growth and made sure that staff can do their work to a very high standard.’