The expansion of the Uniform Platform is being carried out in several stages. Purpose: extra buffer zones to temporarily park wide-body aircrafts. These large aircrafts with two aisles – such as an Airbus A380 – take up a lot of space. More and more airlines use large aircrafts, which is why we need additional square metres. But what’s involved in a project like a platform expansion? 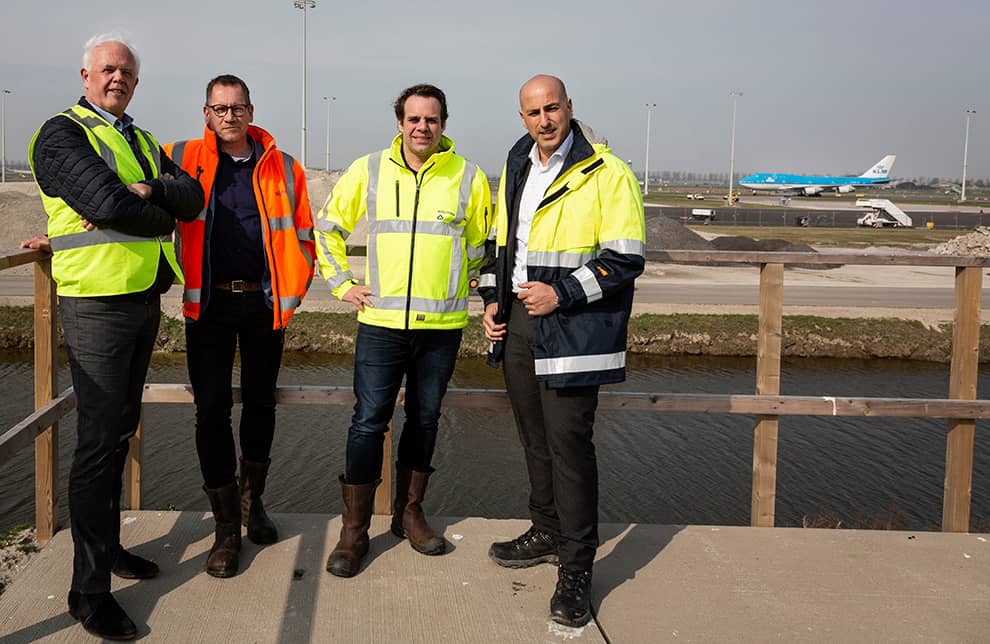 Uniform platform: before and after

The completion of the first phase of the Uniform Platform called for a celebration. A get-together was organised in March for everyone involved in the project. The attendees included Rob Kooper, PLuS project manager, and Farshad Nobakht, client from Schiphol Asset Management. Contractors Marc Kropff from VolkerInfra and John van der Lit from Heijmans were also present. The current status of the project was discussed and the plans for the future of the Uniform platform were presented.

In November 2018, Amsterdam Airport Schiphol designated six temporary buffer zones at the Uniform platform for immediate use. These sites are currently located on a new taxiway behind the existing platform. “That was the first step”, says Rob. “The green light has now been given for phase 2. From now on we will expand the existing platform ourselves. We are building three new wide-body buffer zones there. We are also adding an extra section to the taxiway, which we will connect to existing taxiway Charlie. We can then tow or drag aircrafts via that route.”

From lighting to cable duct

Designing new buffer zones is not a quick and easy task. A lot of planning, preparation and cooperation is involved, between Amsterdam Airport Schiphol and contractors VolkerInfra and Heijmans. “We visit each other a lot during the design phases and during the implementation itself”, John explains. “We are responsible for the taxiways and the lighting.” Marc: “At VolkerInfra we focus on creating the buffer zones themselves, from the dimensions of the sites to the cable ducts in the ground.”

Changes due to Aviation Act

The Uniform platform project is the first project that needs to comply with the new legislation and regulations set out in the Aviation Act. Farshad explains what this means: “Airlines can get an inside look and can provide feedback on the project plans. This took some getting used to in the beginning, because it requires extra discipline and responsibility from all parties involved. But we will put our shoulders to the wheel and start the next phase full of enthusiasm and confidence.”