Laying a new section of taxiway: it sounds so simple. The fact that it isn’t is something that project manager Eric Linschoten knows better than anyone. Eric is responsible for completing the double taxiway system that encircles Schiphol. “It’s a challenging project. None of it will be easy.” 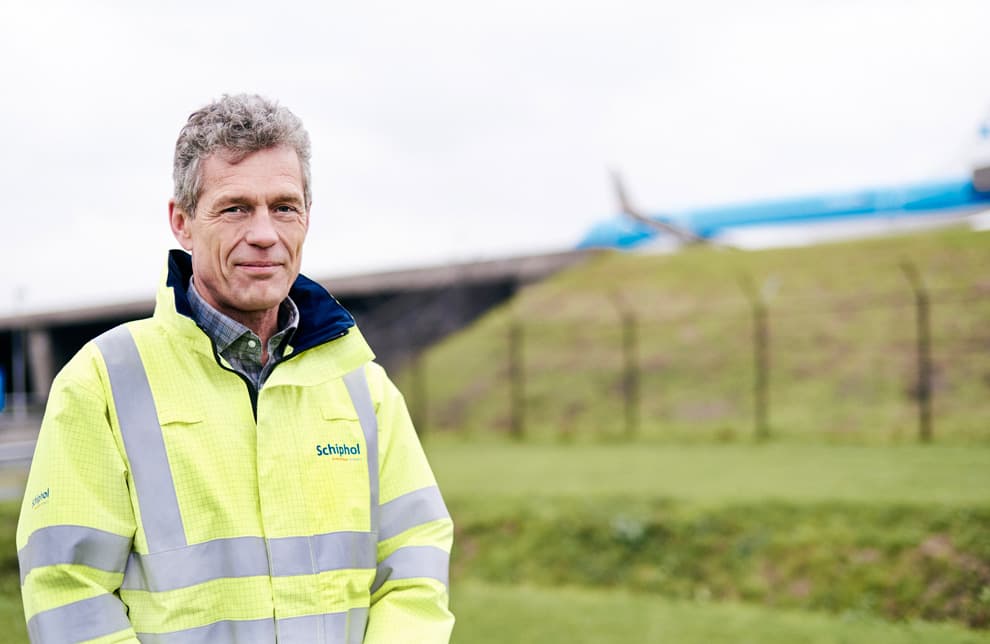 The Schiphol terminal buildings are ringed by a dual aircraft taxiway. Arriving and departing aircraft may use the taxiways in one direction. Eric: “The inner taxiway is for clockwise traffic, and the outer taxiway is for anticlockwise traffic. This makes ground operations clear and efficient.” Unfortunately, one section is not yet two-lane: Taxiway Quebec, to the south of Schiphol Centre, between Runway 06-24 and Runway 18C-36C. “Runway 18C-36C is particularly prone to queues because we have to use Taxiway Quebec in both directions.”

The queues for Runway 18C-36C are not the only reason to double up the last section of the taxiway system. “The queues also affect other parts of the airport; for instance, aircraft headed for Runway 18R-36L can also get caught up. That means congestion and unnecessary delays. And that’s not all,” adds Eric. “A safety analysis and a study by the Dutch Safety Board both recommended that we undertake this project. Doubling Taxiway Quebec will improve the safety of ground operations at Schiphol. The Air Traffic Control people in the tower will soon see the benefits; the situation will be much more manageable.”

Doubling Taxiway Quebec will give Schiphol a completely two-lane taxiway system around the central airport area – but there’s a lot to do before that can be achieved. From Schiphol’s fourth floor Eric looks out over his future building site. He points to a few buildings, including a huge cargo building. “They’ve all got to go,” he says. “The average aircraft we use in the design work has a wingspan of 85 metres, so you have to have about 100 metres of space between the taxiways. And that’s where those buildings are.”

Starting straight away; ready in 2023

Constructing the new taxiway will be a complicated business, for several reasons. “It’ll go over the A4 motorway, so we’ll have to build a new viaduct. There are train and bus lines in underground tunnels, so we’ll have to work something out for the foundations. And there are car parks, a taxi station and a security checkpoint that will have to make way and be renewed.” In his view, the most time-consuming aspect will be finding new premises for Schiphol’s tenants and demolishing the old buildings. “Schiphol will get possession of these buildings in phases. We’re starting the building work straight away, doing what we can. In 2021 we’ll be able to use quite a lot of the new taxiway, and the work will be completed in 2023.”

Besides the new taxiway Schiphol is also constructing a holding platform. “Since we’re already there doing building work...” At a holding platform a number of aircraft can wait temporarily, for example if there is no free gate at the pier. Aircraft cannot taxi backwards, so the platform provides lanes that aircraft can enter and then leave, forwards, to go on to the terminal. Both the taxiway and the platform are currently at the initial design stage. “In March we will start with the tendering, after which contractors can get on with the technical design.”

For Eric the project is an exciting challenge. “We’ve already got some big building projects going on, of course, like the new pier and terminal, but apart from that Schiphol is basically complete. So it’s very special when a megaproject like this comes along. It’s tricky to get it all done to a strict planning schedule; there are no ‘easy bits’ where we can do some catching up. But that’s exactly why I’m looking forward to it! Thinking up smart stuff that means less waiting and fewer traffic problems in the future.”