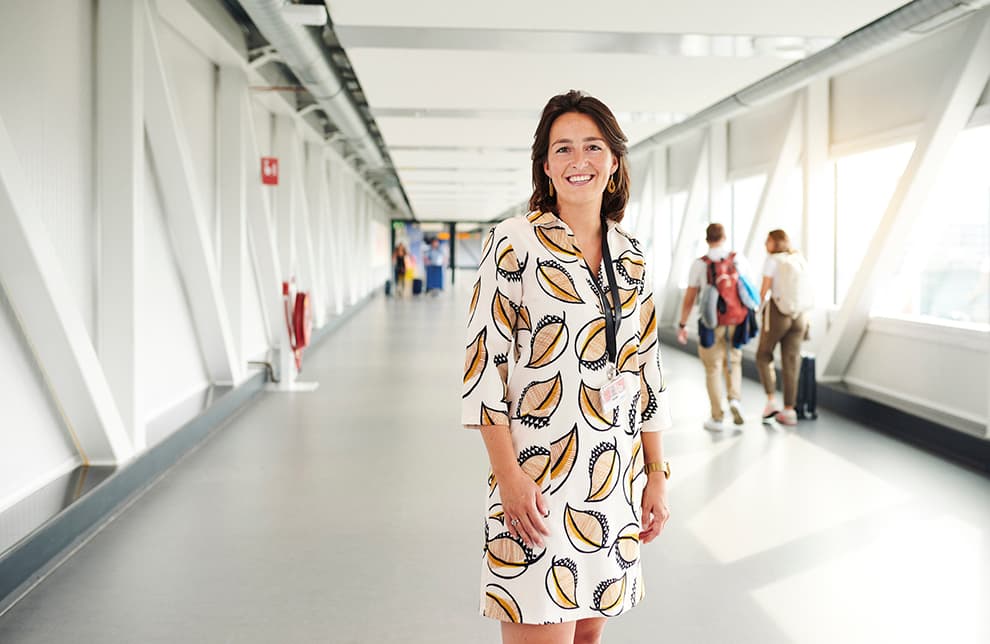 “As of 2 October, the TSF is the main security filter for Departure Hall 1. This change means that almost all passengers using Departure Hall 1 will now take a new walking route.’

It’s no easy feat, creating a new walking route. ‘Safety is our number one priority. Walking routes at the airport cannot be too narrow. After all, 24,000 passengers, that’s a lot of people! Everyone is in a hurry as they all want to get to their gates on time’, explains process developer Elise de Kok.

Most passengers using Departure Hall 1 will now be walking a different route than before. But designing a new walking route is a bit of a rigmarole. ‘Safety is our number one priority. The next step is to ask ourselves: what makes sense? And what about capacity?’

For months, Elise has been carefully planning the new walking route for Departure Hall 1 passengers to the TSF. She has cooperated with numerous specialists, from directors who work on passenger flows to ‘wayfinding’ experts who think about signage. The security department has also weighed in on the design and execution of this operational process.

‘Once we have investigated the options available to us, our wayfinding experts get to work. They draw up a plan: how do we ensure that passengers find the right route to the right security filter? Which signs and additional aids are needed?

‘Eight scenarios are now available for flexible use. Schiphol monitors the situation in Departure Hall 1 and at the security filters 24/7. The Control Centre provides data on the number of passengers expected, but the actual situation is monitored in real time as well; which areas are currently really busy, is there any congestion anywhere? Floor managers and passenger assistants work closely with the Control Centre to keep a close watch and take action quickly where necessary.

The advantage of the TSF as the main security filter is that handling there is significantly faster due to state-of-the-art equipment. Travellers no longer need to remove laptops, phones and liquids from their luggage. This saves lots of time.’

“Good communication is an absolute must, but the division of tasks should also be clear. Who decides which scenario to use? Who changes the signs? Who instructs the employees involved? Security lanes must also open and close on time, depending on traffic, so security staff are on stand-by.’

To ensure that the new walking route works as planned, a number of employees from the Amsterdam Airport Schiphol offices tested the route on 24 September. ‘This is a great way to check whether the plans we have drawn up also work well in practice. And... everything went smoothly! We have tested various routes and scenarios, including lines of communication and changing signage.’

The security lanes at the TSF were opened on 2 October. Nine out of the 15 security filters in Departure Hall 1 are now closed. ‘Managing passenger flows to the right security lanes in Departure Hall 1 will continue to be a challenge in the coming year’, says Elise. ‘But the hardest part is also the most exciting: getting all these experts involved and combining their knowledge and experience to make this project a resounding success.’

The Temporary Security Filter will be operational at least until the end of 2020. One large security filter will then become operational with 21 security lanes on one new mezzanine floor in Departure Hall 1. When that time comes, Elise will go back to the drawing board to create a new plan.