The increase in heavy rains is leading to major problems with excess runoff water which can mount up very quickly. The Uniform Platform project team came up with a promising smart water buffer and drainage system in order to tackle them. It could result in a win-win for Schiphol and the local water board. As Rob Kooper said: “We could double the use of our available land”.

It is important to the local water board that Schiphol properly regulates water discharge around the runways and taxiways. “Schiphol is located on a polder – land which was reclaimed from a lake many years ago”, said Rob. “That means that groundwater levels have to be maintained by pumping water out of the polder. So it’s important to prevent the sudden flow of runoff water into the polder in order to properly manage local water levels”. 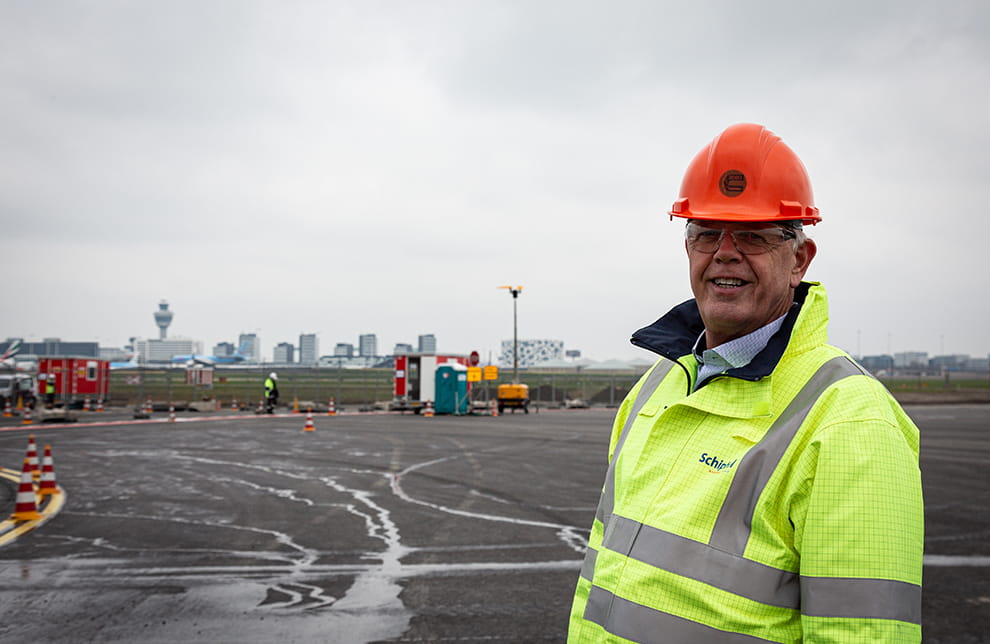 To do this, the local water board sets special requirements for new-build projects that involve new paved or asphalted areas. Around 18% more 'open water’ must be created to accommodate the extra run-off water in addition to the newly constructed paved area.

“That open water could be a drainage ditch or a pond”, explained Rob Kooper, project manager at Uniform Platform. “It is intended to act as a buffer zone for excess rainwater, where the rainwater can collect temporarily – when we have heavy rainfall, for instance”.

“This regulation is actually quite an issue for us” continued Rob. “Building a ditch or pond involves considerable extra cost, especially when you factor in bridges and solutions for cables and pipes. But even more importantly, we would prefer to use the area around Northwest Schiphol to develop the aprons, taxiways and buildings rather than creating ponds and ditches”.

“We’d be looking at quite a significant area of open water just to build the U-apron. A single aircraft stand can easily measure 100x150-metres. We’ll be building three of these. And we already built around 110,000-m2 of taxiways and aprons in previous phases of the project”. So the project team decided they should try to find a smarter way of tackling this issue.

The Uniform Platform project team went back to the drawing board one more time to investigate the possibility of another solution. “Any alternative system needed to channel rainwater away from the (taxi) lanes and the apron on Airside in a controlled manner and without blockages or disruption and also be able to buffer runoff water”, said Rob. “At the end of the day, the system would need to make sure that rainwater would flow into the polder in a way that can be regulated”.

“The approach we took was that you don't necessarily need to dig ditches or ponds to buffer the rainwater. There are other ways to achieve the same goal”. The working group, which included the local water board, explored the options and came up with a solution.

Rob explained that “Our solution consists of three tried and tested water systems, which will be linked but can also be used separately. Two of these are buffering systems. You get the same situation as on regular arable land by temporarily buffering the water within the structures that we are building and then allowing runoff water to discharge slowly and gradually through a narrow discharge pipe”.

The three water management systems are:

Want to see how the innovative water storage system works?

The system still needs to be thoroughly tested in order to check that it works as expected. “The water management systems have already been shown to work separately” explained Rob. ‘But over the next few months, we will need to monitor whether we really can buffer surplus runoff water in this way, whether this combination of systems works properly and whether it is easy to maintain”.

“We’re going to simulate heavy rain showers by spraying several tankers full of water onto the area at the same time. Then we will test various combinations. We’ve installed sensors in various places in order to do this properly. We can continuously monitor the water level and flow to see how the system performs using an online measuring system. This testing process is also important for the local water board”.

It will be a win-win for all parties if the new solution turns out to be a success. “This smart system would help the water board to regulate water levels by buffering runoff water. Of course, it’s useful for us too because we won’t need to create as much open water”.