At Schiphol, we want our operation on the platform to have undergone a significant transformation by 2050. We want to replace all vehicles with an interconnected fleet of self-driving (autonomous), emission-free vehicles. A first step towards our goal is our fully autonomous and emission-free passenger bridge. This double passenger bridge is equipped with smart camera technology that can recognise airplane doors. Using sensors, the bridge automatically moves towards the aircraft doors and connects itself to them. It’s unique – we are one of the first in the world to have built this!

With innovations like this, Schiphol strives to improve the service we provide and the quality of that service.

Schiphol wants to make the turnaround process as efficient as possible. Passengers appreciate being able to disembark the aircraft quickly and airlines benefit from having short turnaround times. This is the time it takes for passengers to disembark and board the aircraft, load and unload baggage, refuel, clean, and so on. Every minute a plane is on the ground costs money. One of the steps in the turnaround process is attaching the passenger bridge to the aircraft doors so that passengers can get on and off the plane.

Oscar Maan, innovation manager at Schiphol: "Bridge malfunctions were very inconvenient for airlines and passengers. Passenger bridges need to be attached quickly and meticulously. An experienced member of staff can do that in under a minute in ideal circumstances. However, not everyone has the same level of experience and cannot work that fast. After all, we are talking about a massive, extremely heavy piece of machinery that is controlled with a joystick. Sometimes, the bridge isn't attached properly and the safety mechanism switches on and it can no longer be moved. A malfunction like that can take up to half an hour to fix and this has knock-on effects. In 2017, we began looking at the causes of the malfunctions and at what could be improved. I started as project leader in 2018." 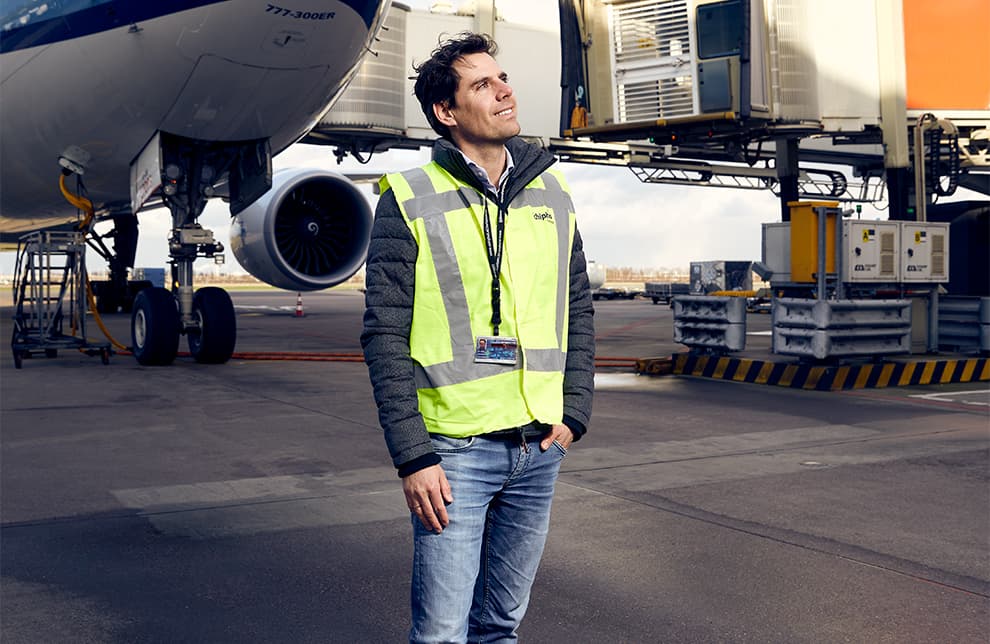 Towards a self-driving, automatic fleet

Every airport has handling agent staff who operate passenger bridges. Handling agents are hired by airlines to organise the processes that are involved in a flight. These include the check-in in the departure hall, loading and unloading baggage, and operating the passenger bride. There are six handling agents with a total of more than 1,500 employees at Schiphol.

Oscar: “We noticed that it takes a lot of knowledge and experience to operate the passenger bridge. Staff need to be well-trained and get enough regular practice. That's why we wanted to see if we could make operating the bridge easier. In the meanwhile, Schiphol embraced the vision of creating a self-driving (autonomous) and emission-free fleet. This inspired us to think about the possibility of attaching the bridge automatically, autonomously (without staff) and without producing any emissions. And could our solution be a separate unit that could be installed on every bridge (so that we wouldn't have to remodel the 133 properly functioning bridges we already have)?"

Oscar: "We wanted to know if we could make an automatic and autonomous system that would consistently attach the bridge in under a minute, regardless of weather conditions, time of day, aircraft type etc. So, we went ahead..., we allowed a margin of error of 1 in 1000 bridge connections. These were the starting points for our business case.

We also calculated how much time we would save if all human errors (and corresponding problem solving) were eliminated. In order to do this, we analysed 51,000 bridge connections. It was a huge task because it didn't just involve retrieving dashboard information. We had to dig deep into the code to access the data and clean it."

Let’s make it ourselves then

It turned out that we had a good business case; the passenger bridge and turnaround process could be vastly improved by a bridge that could always be attached in under one minute. Oscar: "Unfortunately, there was no automatic and autonomous bridge on the market. But luckily, our current bridge provider – the Chinese company CIMC-TianDa – wanted to pioneer and build it with us. We also enlisted high-tech company SIOUX-CCM as a third party. They were able to develop an image recognition system that can determine the exact location of an aircraft door and use an algorithm to steer the bridge. We brought three pioneers together – a bridge builder, an optomechatronics (high-tech camera solutions) expert and ourselves as test location – and jointly signed a development agreement.

There was a great deal of uncertainty. Although we knew what we wanted, we wondered whether it was actually feasible and whether we could make it. You also need to bear in mind that an airport is an environment in which risk minimisation is key, and that we always work according to strict safety regulations (safety first)! A self-driving car on the open road is already quite something, but this was a much bigger step. A bridge colliding with an aircraft would not just be a safety incident, it would also cost the airline a great deal of money."

Oscar: SIOUX advised installing high-definition cameras on the bridge that can recognise aircraft doors. Many different types of aircraft (in all the colours of the rainbow) come to Schiphol, and so these cameras had to learn what is and what is not the door of an airplane. To make this possible,1000 images were fed into the algorithm. We did help the algorithm out a bit by providing it with data from our information system that knows, among other things, exactly what type of aircraft is at the pier.

The cameras needed to function in all kinds of weather: bright sunshine (heat and adverse light), snow and fog. There could be no condensation on the lens, and everything had to work properly in temperatures between -10 and +70 degrees. To sum up: SIOUX developed not only cameras that can recognise aircraft doors, but also casing, a climate control system and an algorithm that can steer the bridge to the exact position of the aircraft door (replacing the joystick).”

Proud to be pioneers

There came a time when the worlds of hardware, software and real-life application had to meet. In May 2019, we carried out the factory acceptance test in Shenzhen, China. This included an anti-collision test and weather conditions test involving a snow canon. We had to make a few adjustments here and there, but we saw our dream becoming reality. What we had been aspiring to all that time was indeed possible!

KLM was also eager to lend a helping hand. In the spring of 2019, KLM and Schiphol carried out the site acceptance test with the double passenger bridge at Pier F (gate F9). One of the most important pieces of the puzzle was tested: the interaction between the bridge's camera system and our Visual Docking Guidance System (VDGS). After resolving a few remaining issues, we successfully started using the camera system at gate F9 in January 2020. Since then, KLM and the Skyteam partners have been using it to their satisfaction for intercontinental flights. 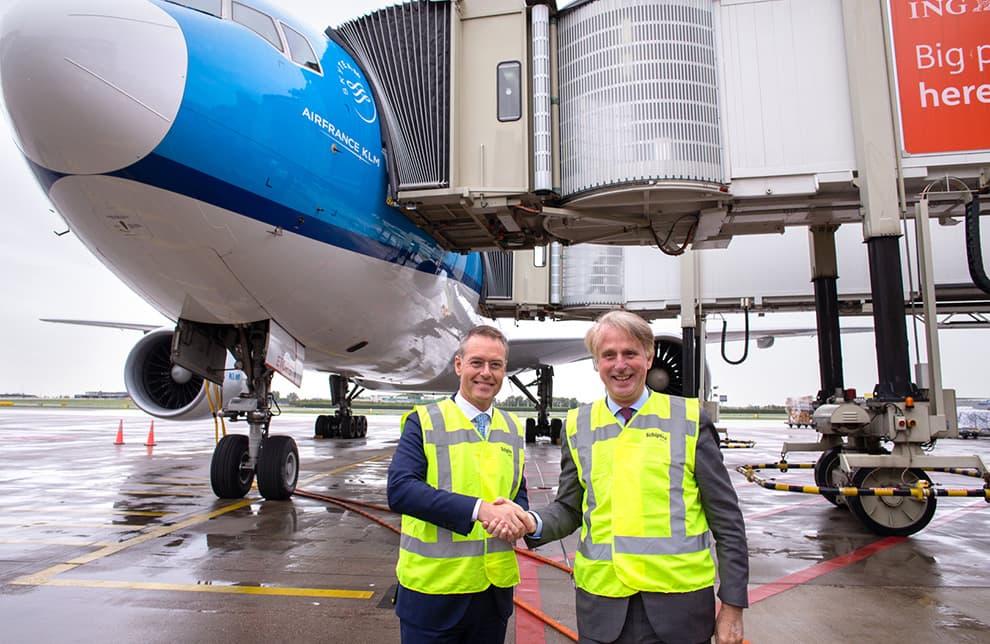 The automatic, autonomous passenger bridge can, at any time and under any circumstance, attach itself to any kind of aircraft in under one minute. We are among the first in the world to do this. Now, there is still an operator who commands the bridge and checks that everything runs smoothly. In the future, that will no longer be necessary. When the aircraft is in the right place and ready, the bridge will make its own way towards the plane. We had hoped to deploy the system across Schiphol (133 bridges), but investments have unfortunately been postponed due to the COVID-19 pandemic."

Royal Schiphol Group wants to run the most sustainable airports in the world in 2050. At the same time, we want to make better use of our airports' capacity and guarantee safety. Making all vehicles and corresponding airside processes autonomous and sustainable will contribute to this ambition. We expect that the daily activities on the platform will have changed significantly by 2050. By that time, all vehicles will have been replaced by an interconnected fleet of autonomous, emission-free vehicles and all corresponding processes will be automated. This will include sustainable taxiing, baggage transport and passenger transport.

Would you like more information about this innovative development? Or would you like to collaborate with us? Let us know by sending an email to digital@schiphol.nl.