Written by Dirk Bresser and Simon Prent: Is sustainable taxiing possible at a busy Schiphol

Thanks to the Taxibot trial, we now know what the prerequisites are for sustainable taxiing at Schiphol. However, we carried out the trial using just one towing vehicle at an airport that had been dramatically slimmed down as a result of the coronavirus crisis. This meant that more research was needed into the scalability of the concept. What if all aircraft were to taxi sustainably at a busy airport? 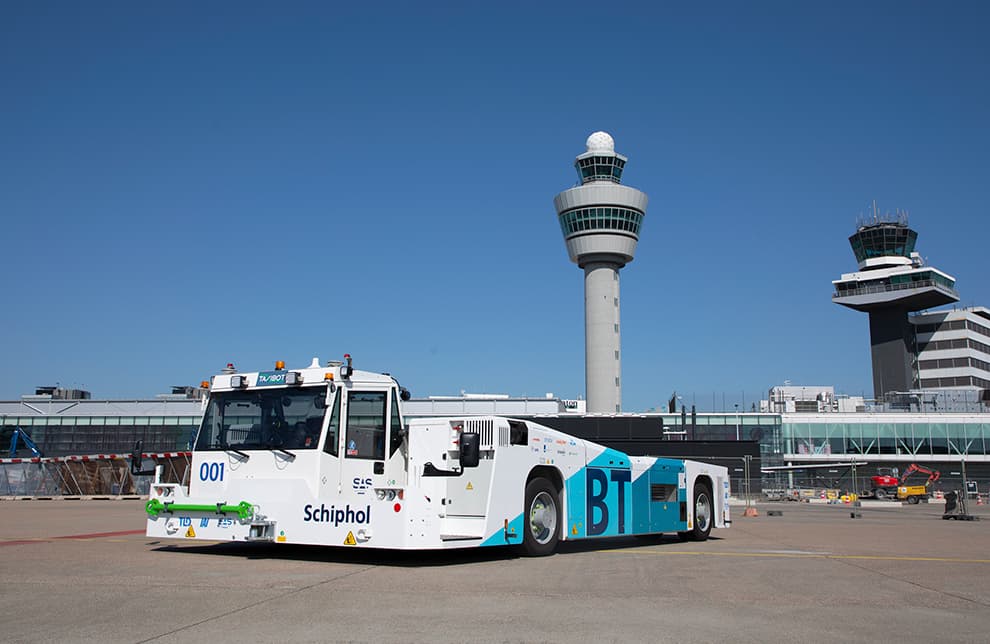 We put this question to various experts and asked them about the biggest challenges facing sustainable taxiing. Among their responses were the issues of driver availability and docking:

As well as consulting experts, we made a simulation of sustainable taxiing at a busy airport. Schiphol and Air Traffic Control the Netherlands (LVNL) have a ground traffic simulation tool that calculates capacity at the airport. This tool is now also being used to plan sustainable taxiing. Under the guidance of aviation consultant To70, a thorough analysis was conducted around the following question: what if all departing flights taxied sustainably on the busiest day of the year using current infrastructure and processes?

We found out that minor problems can become major ones. In the previous blog we mentioned that Taxibot uncoupling points are different to the usual pushback uncoupling points. You can compare it to a car; the pushback vehicle usually uncouples in the ‘car park’, while the Taxibot does it on a motorway lane. To understand why this can lead to complications, we will explain how traffic management works.

Every aircraft that departs from or arrives at an airport is under the control of a traffic manager. At Schiphol, that person works for air traffic control as a ground controller. Their job is to guide pilots through the airport; they plan the route and, if necessary, give the order to stop at certain places. This may be required when the aircraft needs to cross a runway, for example. A ground controller is responsible for optimal, efficient and safe routing across the airport. They monitor whether the aircraft can go to the gate (arrival) and the order in which planes can go to the runway (departure). They communicate via radio frequency, as is customary in the aviation sector. It’s a job with a lot of responsibility. Capacity calculations are based on the premise that a ground controller can provide multiple aircraft with optimal and safe routing at the same time.

Fixed driving and pushback directions ensure an optimal and safe routing. This kind of standardisation works well, but there is a disadvantage. Having two standard driving directions is only possible if the infrastructure – the taxiways – is in place. Correspondingly, fixed driving directions depend on the absence of congestion. And that is precisely what would result from using the Taxibot under current circumstances. The taxiways that function as thoroughfares and where there is one-way traffic would become congested because of uncoupling. That would lead to a queue of planes behind the uncoupling aircraft. The comparison with a motorway is no longer applicable. On a motorway you can simply bypass the closed lane, but at the airport you are stuck because using the other lane would mean driving into oncoming traffic. The ground controller would of course try to make sure that you avoid queues. But the busier it gets, the more likely it is to happen.

This is clearly a problem that needs to be tackled. It seems logical to first consider infrastructure, construct an extra taxiway perhaps. Indeed, if you can prevent the Taxibot from standing still on a taxiway, the system of standard driving directions can be kept in place. There are spots along the Polderbaan and Zwanenburgbaan runways that can help solve this problem. They were originally meant for de-icing (removing ice from the surface of the plane), but that now takes place at a central location. These places are perfect for the Taxibot. Uncoupling at all the other runways will lead to blockages on the taxiways. And there is also the question of whether there is enough space and funding for more infrastructure.

Let’s go back to the ground controller. Standardisation is meant to help them, but what if neither standardisation nor new infrastructure is actually necessary? Imagine you could simply drive past queues, just like when you are in a car. A guidance & control system can help make this possible. Work has been underway on a European Advanced Surface Movement Guidance and Control System (A-SMGCS) for several years now. Eventually, this system will be mandatory at all airports, including Schiphol, and will be an important prerequisite for the implementation of sustainable taxiing at large airports.

It remains to be seen whether this kind of system will be of sufficient help to ground controllers, but large-scale research will certainly be conducted. This is a key issue of sustainable taxiing that we will be looking at in more detail in another blog.