Written by Dirk Bresser and Simon Prent: The benefits of sustainable taxiing

We recently announced that Schiphol and our partners have started testing sustainable taxiing, and since then a lot of people have shared their thoughts with us. Most responses fall into one of two categories: critics who want to know if sustainable taxiing is doing enough for the environment, and people who wonder why this idea still hasn’t become a global standard. Read on to find out more about what sustainable taxiing means for us. 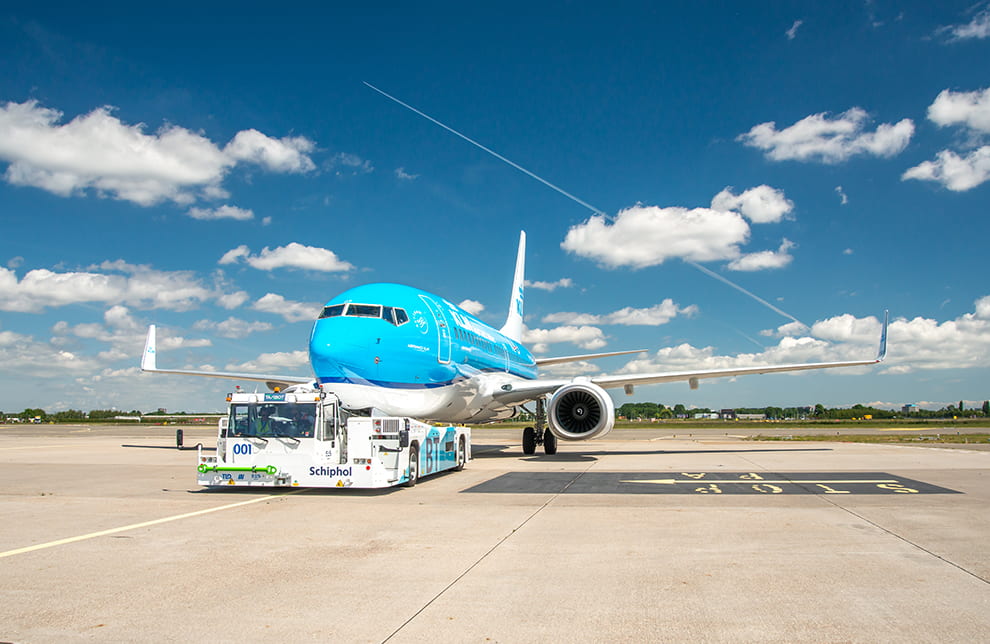 What do we get out of sustainable taxiing?

It would be great to be able to answer this question with one clear number or percentage. Sadly, that’s just not possible. This market is relatively small, new and opportunistic, and we have to use a range of figures for potential savings. Before we can talk about what we get out of sustainable taxiing, we need to get a few things out of the way. Let’s start with the three approaches to saving fuel, which in turn saves on CO2 emissions.

So you could talk to someone today who claims to be saving 4% of fuel, then tomorrow someone could tell you it’s actually 95% – and they’d both be right!

Why is it still not possible to save 100% of fuel?

The answer to that question has to do with the engine’s warming-up time and the use of an Auxiliary Power Unit (APU).

Before an aircraft can take off, its engine needs to warm up. That can take anywhere between two and seven minutes, mainly depending on:

If all these factors are in your favour, two minutes is enough. If you’re not so lucky, you’ll have to wait seven minutes. Our calculations are based on three minutes of warming up. Then the engines have to cool down after the landing, which we also calculate at an average of three minutes. This means that longer taxiing times yield greater returns; in terms of kerosene consumption, sustainable taxiing is not viable at small airfields with short taxiing times.

Aircraft also need fuel for the APU while they’re taxiing. Almost all modern airliners have an APU that provides the aircraft with:

The APU usually runs until both engines reach stable running conditions, so it needs to be on during the entire taxiing process, whether sustainable or conventional. In the case of a Boeing 737, the APU consumes a little over two kilograms of kerosene per minute; taxiing using two engines would consume 15 kilograms per minute.

When you feed all this data into a model and try to calculate your savings, it’s clear that the results you’ll get are heavily reliant on your assumptions. That means that we have to work with estimates. Schiphol’s models are based on the percentage savings at ground level, and our tests using the ‘taxibot’ have shown that we do indeed make savings of between 50 and 85%.

At Schiphol, we could save at least 31 million litres of fuel every year if all the airport traffic taxied sustainably. That’s about 80,000 tonnes of CO2.

Reducing disturbance at and around the airport

A 50-85% drop in fuel consumption at the airport is an outstanding achievement, as harmful emissions will be reduced as a result. When we talk about emissions, we’re usually referring to CO2 and other greenhouse gases that we want to reduce. However, because aircraft engines are less efficient at sea level when running at low capacity, for instance whilst taxiing, we can see even greater savings in terms of other substances such as carbon monoxide. We also expect to see positive effects in other areas, such as noise disturbance. When it comes to sustainable taxiing, it’s important to consider the reduction in local emissions and the disturbance caused at and around the airport. Click here to find out how Schiphol is building a sustainable future, and here for more information about how we are working to limit our impact on our neighbours.