Taxiing in a plane to the Polderbaan Runway will soon be a lot more sustainable. This year, Schiphol is buying two TaxiBots. They will be used to tow aircraft to and from the runway, meaning that pilots can keep the engines switched off until they’ve finished taxiing. This will lead to a significant reduction in emissions of (ultra)fine particles, nitrogen and CO2. Schiphol is the first airport in Europe that wants to make sustainable taxiing standard procedure. 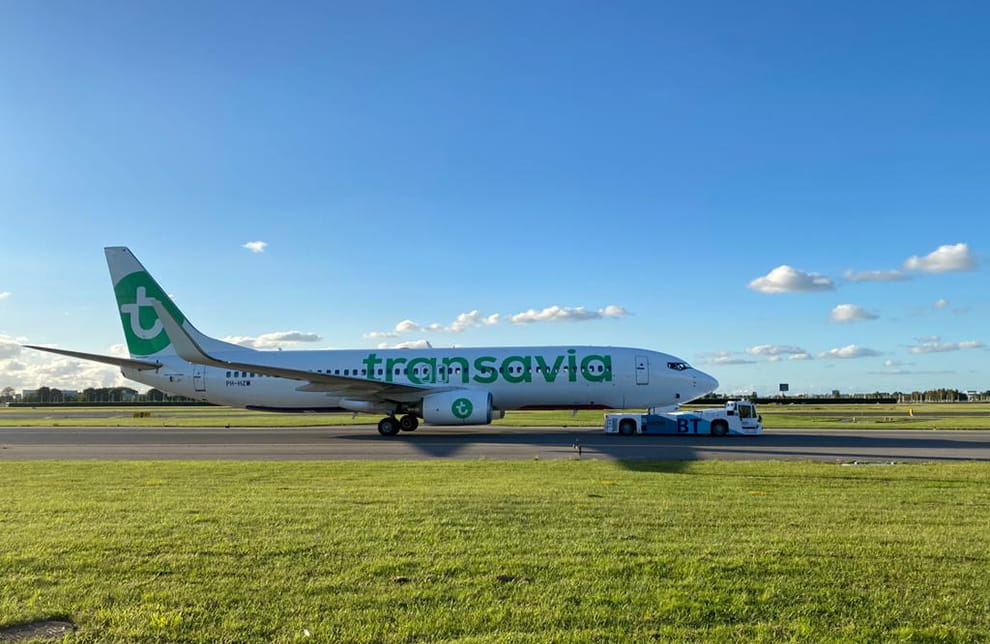 The TaxiBot is a special towing vehicle that takes a plane from the gate to the runway, or from the runway to the gate. It’s different from other towing vehicles as the TaxiBot is able to taxi the aircraft at normal speed as well as slow it down. During taxiing, the TaxiBot is controlled by the pilot and not the person who’s driving the vehicle. The driver only connects the TaxiBot to the aircraft and carries out the pushback (the process of pushing the plane backwards from the gate). The pilot takes control as soon as the taxiing procedure starts. It’s like a big caravan mover, but for planes.

Pilots don’t need the aircraft engines while taxiing with the TaxiBot – it tows the plane. That means the engines can remain switched off, which leads to fewer CO2, NOx and (ultra)fine particle emissions. The TaxiBot produces significantly fewer emissions than an aircraft engine. An earlier pilot study at Schiphol showed that around fifty percent less fuel is needed for sustainable taxiing. And when it comes to taxiing to the Polderbaan, fuel savings can reach up to 65%.

Sustainable taxiing to the Polderbaan

Various preparations are required before the TaxiBots can taxi to the Polderbaan. We need to apply markings that indicate where the planes can stop to couple and uncouple, for example. We are working together with Air Traffic Control the Netherlands (LVNL), KLM, Transavia, Corendon Dutch Airlines and ground handling companies dnata and KLM Ground Services to make the necessary adjustments for sustainable taxiing. TUI, Viggo and Swissport are also getting involved.

Schiphol’s ambition is to be the most sustainable airport in the world. We want the activities on the ground at and around the airport to be zero emission by 2030. And we’re encouraging cleaner, quieter and smarter flight. That’s why we’re the first European airport to invest in sustainable taxiing using the TaxiBot. There are currently a few TaxiBots being used at two airports in India, so progress is being made worldwide. By investing in these kinds of sustainable innovations, we can ensure that travelling by plane remains accessible for future generations too.