Ton de Rooij’s grandfather was wounded by an unexploded cache of explosives on a farm near Schiphol during WWII. These days, he works as a Conventional Explosives expert at Schiphol. He explains, ‘we estimate that there are about 1500 unexploded bombs located around here. The new terminal is in a partially suspect area. It’s time for soil research, so that what happened to my grandfather doesn’t happen to other people’. 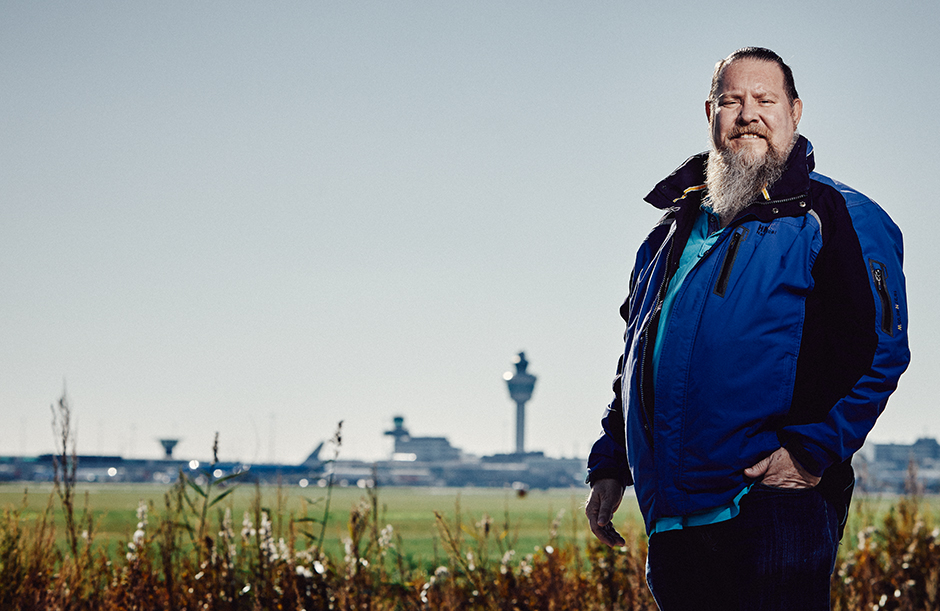 According to a news excerpt from a radio broadcast made on 8 August, 1944:

“A projectile has exploded near the Breure farm on Schipholweg, which has left 3 injured. Commander and Administrator LBD are going to the crash site. The Injure are: G. Combee, Raadhuislaan 13 in Hoofddorp. Unconscious. Severe injuries to eyes. Johannes, Cornelist de Rooij, born: 31.8.1894 in Hoeve (N.B.), married, from Berieo boerenknecht, living Hoofdweg 11. Wounded by chest, right arm and face. Marinus de Rooij, b. 8.8.1908 in Hoeve (N.B.), married, by profession farmer's hand, living Lijnderdijk 271. Wounded by chest, chin, neck and right hand. All included in the Westergasthuis in Amsterdam.

Result of research: many pamphlets were distributed by the English by air. The paper used for the distribution of these papers was made of an explosive substance. It is almost certain that the explosive charge did not work and instead landed undamaged on the ground. When the sheaves were put up, one of the workers knocked up against the object, after which detonation followed with the above-mentioned fateful consequences”.

The report above is about Ton de Rooij’s uncle and grandfather who were working at Schiphol’s Asset Management Department, and was given to the municipality of Haarlemmermeer. Fortunately, his relatives are in good health and can tell the tale. ‘The version my grandfather told me is a bit different’, said Ton. My grandfather, uncle and the civil servant found the pamphlets with explosives in them somewhere in a crop field. They were intrigued and messed about with it, and that’s where things went wrong”.

Schiphol is one of the areas in the Netherlands that suffered a lot during WWII. As Ton explains, ‘archival research shows us that about 22,000 bombs fell at Schiphol. About 10-15% of them never went off’. Most countries kept meticulous records and kept track of exactly how many bombs went off and where. ‘Pictures were often taken after the bombings. Thanks to these images, we can compare the registered bombs with the number of impact craters. These can be clearly seen in the photos, because they sometimes had a diameter of tens of metres, but of course that depended on the type of bomb that was dropped’. 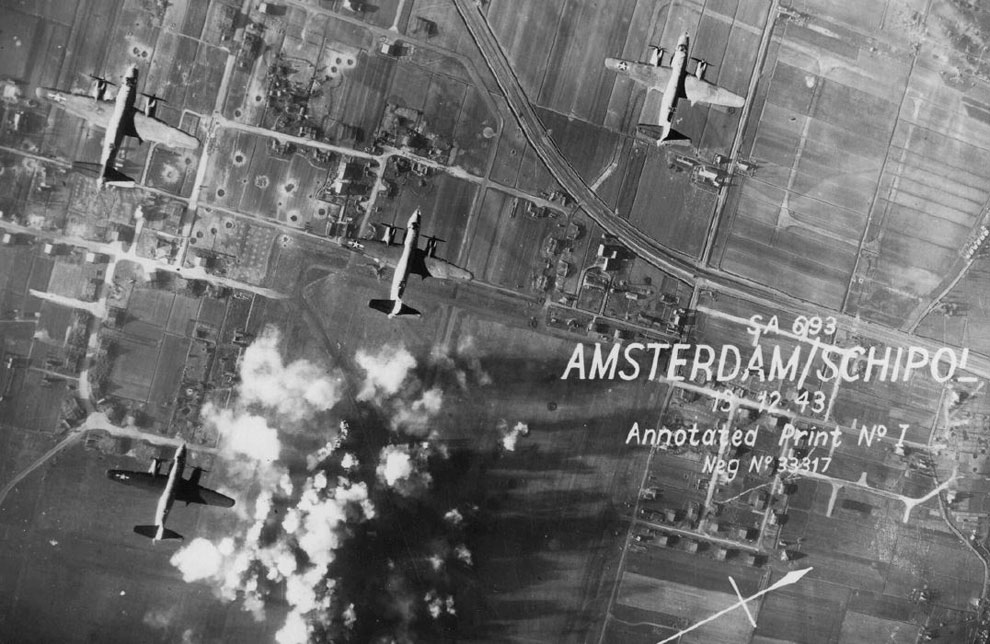 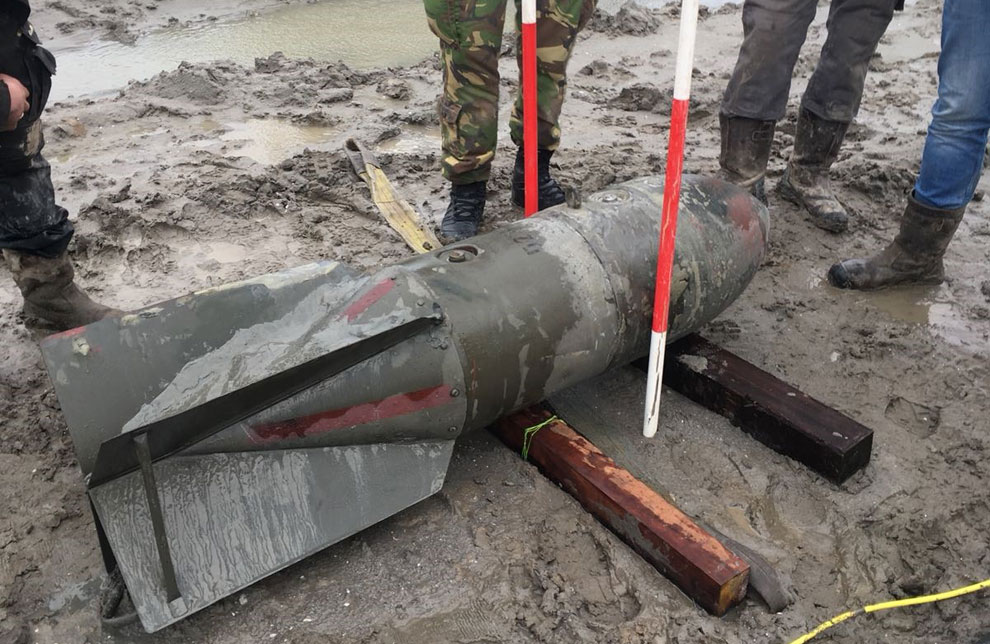 From a small firebomb to 500 kg of heavy artillery

About half of the bombs that ended up at Schiphol were small firebombs that were filled with white phosphorus. ‘We know that they stayed on the surface and burned up; we never found them back then. At the C-pier, a large 250 kilos bomb was found a few years ago. ‘It took a whole operation to dig it up and dismantle it. Last year we found a grenade of Dutch descent. In time, something else is bound to show up again’.

Schiphol has been working with its ‘bomb policy’ for 13 years. As Ton explains, ‘we must be able to work and build safely at the airport. As soon as a new building project starts, the first thing we do is soil research. Finding bombs are part of that soil research. From 1994 onwards, we have had a bomb card, which shows us the parts of Schiphol that are suspected bomb areas. If we want to build there, we must first check whether the soil research has been completed in that area. And if so, to what depth. If more research is needed, our contractors or their subsidiaries are ready to do the investigation’.

There are several possibilities if a suspicious object is noticed in the soil. ‘We can decide to move the construction project, or to build around it at a safe distance. We only do excavations if they are absolutely necessary. Dismantling the bomb using the Explosives Disposal service is drastic. It can disrupt the processes and construction projects. With this in mind, the province decided to move a bicycle tunnel under Schipholweg underneath the Schipholweg by moving about 100 meters to the right. At the original location three suspect objects were in the ground.' 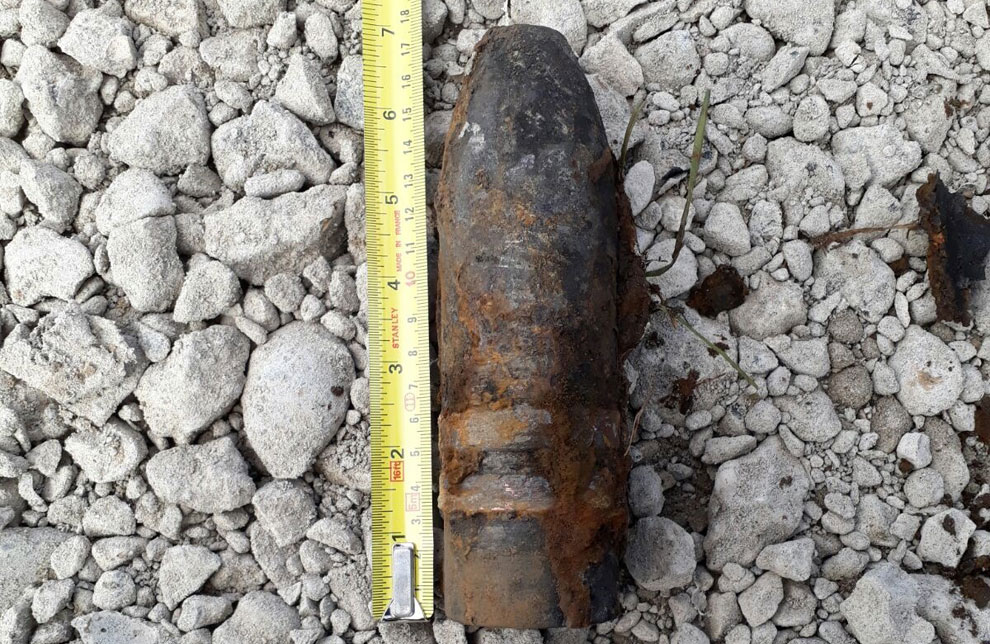 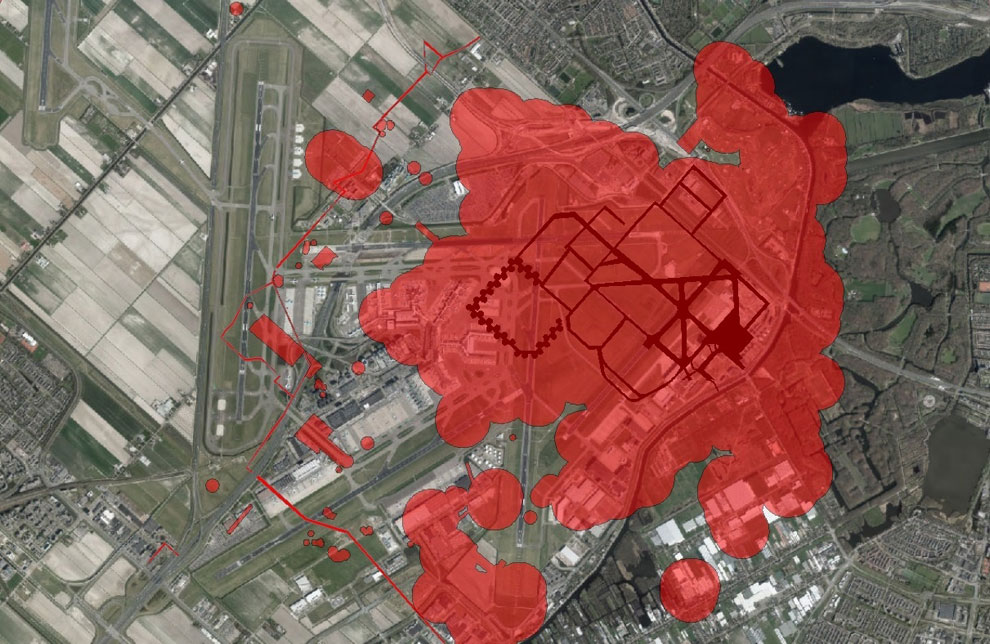 The bomb map shows that a piece of land around Schiphol Centrum’s Traffic Control Tower is considered a suspicious area. ‘The new terminal will be in that spot by 2023. We are now working hard on a risk analysis for that area, so that we can safely build there in the future’.

Before Ton carried out bomb research at Schiphol, he was a graphic artist, firefighter and occupational health and environmental specialist. He joined Schiphol in 2005. His birthplace is on the Schiphol site next to the former Hugo de Groot Farm on Schipholweg, a place where his family still lives. ‘It was probably destiny’, he says.