He’ll be there on the night of 30 September and the early morning of 1 October 2017: Wayfinding Project Manager Peter van Wijk. This is the night when the many hours of hard work put in by him and his team in recent months will come to fruition: new routes and new signs throughout Amsterdam Airport Schiphol. ‘You’ve no idea how much work has been involved.’

Construction of the new terminal at Schiphol requires space, which was found at the current site of the P2 car park, on the Havenmeesterweg. ‘The decision to demolish P2 was a particularly radical one,’ says Peter, ‘with very far-reaching consequences. Schiphol is already full and there’s no space to build the exact same car park anywhere else on site. Therefore, we need compensatory parking facilities. All of the traffic routes will change as a result and we’ll need new signage, too.’ 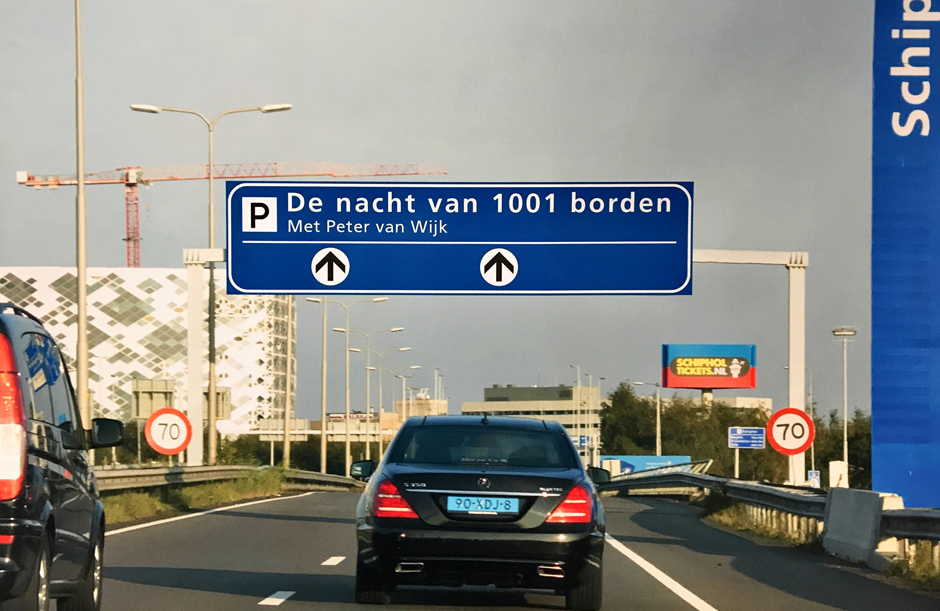 Initially, Wayfinding was just another project that had been assigned to Peter. However, it soon became clear that it was going to be quite full-on. Peter: ‘In consultation with Mijksenaar, the company that designs all of our signage, we came to the conclusion that approximately 80% of all signage at Schiphol would need to be replaced. That’s a lot of signs. It took a while for everyone to realise what a large-scale and major challenge this would be.’

It’s now clear that Wayfinding is a project on which many things depend. ‘If we don’t get this right, Schiphol will be reduced to a complete mess. Therefore, we’ve prepared for the ‘night of 1001 signs’, as we call it, in great detail. Entire contingency plans have been produced. Have we obtained all of the relevant permissions, from the Directorate-General for Public Works and Water Management (Rijkswaterstaat), for example? Are all of the signs needed in production? Are the texts correct? Are the routes correct? We can’t afford to make any mistakes.’

Getting people where they need to be, fast

The first new signs are already in place here and there at the airport. ‘You can’t actually see them yet, though,’ Peter says, ‘because they’re covered with foils and stickers that still show the old situation. They will stay like this until the night of 1 October, when we’ll put up new signs, remove the foils and also make sure that passengers reach the airport’s (new) parking facilities as quickly as possible. We’ll also use traffic controllers and digital diversion signs to ensure that everything runs as smoothly as possible. It’s very important that people follow these directions and don’t simply drive in the general direction of where they think the car park will be, because the routes are going to change drastically.’

Although he’s still sleeping well at night, the Wayfinding project is definitely one of the bigger challengers that Peter has ever faced. ‘And that’s saying something! I’ve been working at Schiphol for 28 years now and I’ve experienced a lot. We’re working with a whole number of other companies as part of this project, such as Heijmans, HR-Groep, the Directorate-General for Public works and Water Management and Mijksenaar. This hasn’t made the project any easier, although we’re fortunate to have so much support. For example, we need special lorries to suspend a large number of new signs over access roads. There aren’t that many of those in the Netherlands, but they’re always there for us when we need them.’

‘What’s difficult,’ Peter continues, ‘is the fact that we aren’t able to trial everything in full in advance. For example, the digital displays over access roads that specify the number of spaces available in car parks. Although we can test them in the factory, we’ll only be sure that they work once everything has actually been installed. Fortunately, the entire Wayfinding team is positive. There’s definitely no lack of commitment, but we’ll have to wait until 1 October to see whether everything we’ve done has been enough.’