The new stairway/escalator in Terminal 1 is almost complete, but this installation is a tricky one: the site is too small for the crane that would normally deliver the steel construction as there is a ‘baggage screw’ in the way, and there are even more obstacles in the form of a concrete structural beam and a weakened supporting wall. So construction consortium Operations First joined forces with Royal HaskoningDHV to come up with a master plan. 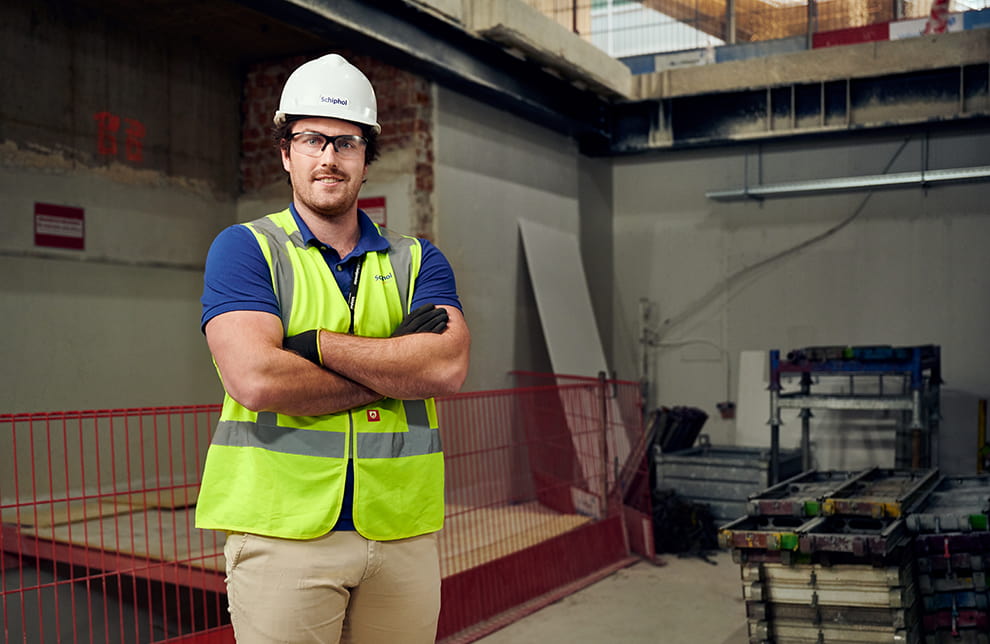 “We would usually lay the steel bars on the floor underneath the new stairway, bore lifting holes into the floor above, bring in gantry cranes and haul the bars up in a horizontal position,” explains project manager Marc de Graaf. “But that was simply not possible at this location.”

What are the obstacles that are complicating matters? “The biggest obstacle is the ‘baggage screw’. That’s the shaft (shaped like a screw) that houses the transport belt that carries the suitcases two floors down from Departure Hall 1 to the baggage area on floor -1. This baggage screw has a separate security status with solid walls and sensitive equipment – and that equipment has to stay operational, so we can’t just move the screw out of the way.”

“The end of the baggage screw comes out into a space the baggage staff call ‘the doghouse’. It’s right in the middle of our construction area. That means that we can’t haul the steel bars up as usual; we can only bring in the cranes once the bars are already a few metres above the floor. That makes things difficult, as the bars are up to 8 metres long and they weigh between 1,000 and 2,000 kilos. So Operations First had to come up with a plan.”

“The contractor suggested that we haul the steel bars up and move them horizontally by ‘plucking’ pre-stressed steel cables. We adapted that plan so that in the end the steel bars were moved horizontally across scaffolding using transport ‘dogs’ (small, sturdy vehicles). It worked well and some of the work is now finished.”

Problem solved – or so you might think. But the baggage screw was not the only problem. ”The second obstacle is a concrete structural beam on the floor above,” says Marc. “That’s in the way, too. We’re going to have to saw holes in that, because the steel bars for our design have to go through it in several places.”

Then, just when they thought they had solved all the problems, a third obstacle reared its head: the wall that was supposed to support the concrete beam while the holes were being sawn turned out to be too weak. As Marc explains, “A bit too much of the supporting wall was removed in the past, which means that the wall no longer has the full strength to give the concrete beam the necessary support while we’re working.”

“If we don’t reinforce that wall, we run the risk that both the concrete bream and the connected floors – a combined weight of some tens of thousands of kilos – come crashing down. That would have serious consequences: that much weight could weaken the floor below, and there’s a high-voltage area under that floor, so the risks are huge. This also affects the order in which we install the steel bars and when we saw the bearing for the escalators.”

“Our standard method is first to install the steel and then to saw the bearing for the lift shaft and escalators. But we can’t do that now, due to the combination of the weak supporting wall and the obstacle that is the concrete beam.” It was time for Part 2 of the master plan:

“Ike van Rossum, senior structural engineer at Operations First, came up with a stopgap right away: a supporting structure, made up of a steel column and metal stamps on steel girders under the concrete structural beam, that diverts the forces to strong parts of the building.”

“Then we work step by step: we saw a notch into the concrete beam, haul up a steel bar, saw the next notch, and so on. If we don’t do that, there’s a risk that the concrete bar will fall.”

“It’s like constantly standing on a balance beam: if we do too much too fast, everything will fall, but if we do too little we won’t work fast enough. It’s still a race against the clock. Another project team (HBS2020) – who are going to upgrade the baggage screws so they comply with new legislation – are ready and raring to go. But first we have to reinforce the supporting wall. Once that’s done, it looks as if all the risks will have been tackled and we can breathe easily again.”