Lifts, stairs and escalators are now the main focus of the construction work in Departure Hall 1. From the brand-new staircase by the exterior wall to the new lifts, stairs and escalators to the rear of the departure hall, towards the lounge and the security zone. We are also hard at work on the second floor, where new security lanes are due to be installed soon. Time for an update. 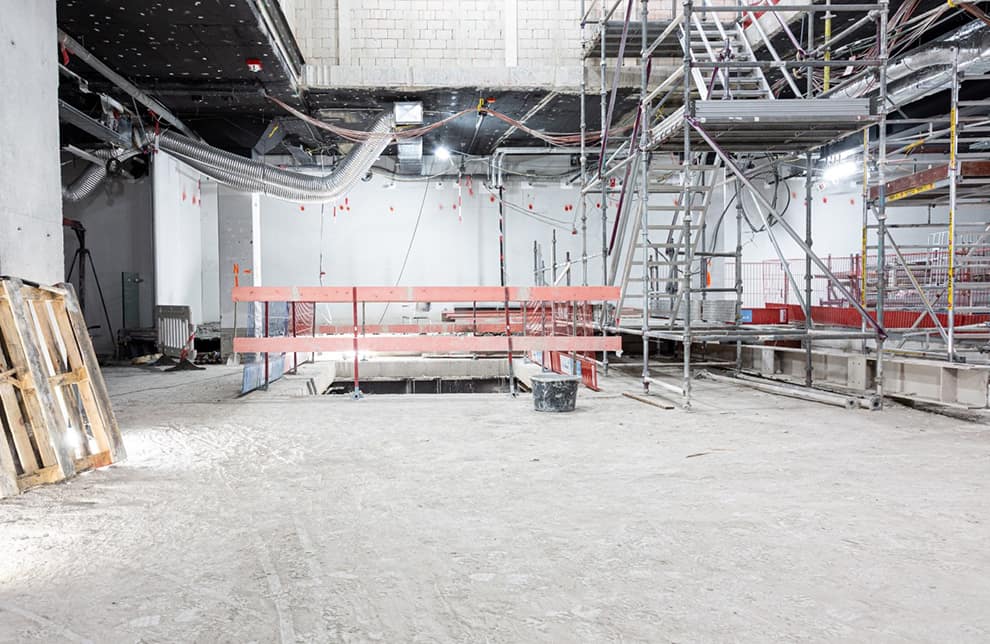 As the crow flies

Like crows in flight, the focus of our upgrade in Departure Hall 1 is to achieve the most efficient routes possible. The shorter the route from A to B, the better it is for passengers and for optimising the flow of people through the airport.

A staircase has now been constructed by the exterior wall. You can find it next to the escalator. This new route will soon enable passengers without hold baggage to make their way directly to the second floor. To accommodate the new lifts, stairs and escalators, the exterior wall was moved outwards a few months ago.

But what about the passengers in Departure Hall 1 who do have hold baggage? We are also installing new lifts, stairs and escalators for them: a construction area at the far right of the departure hall is currently being prepared. After checking in, they can use this new route to ascend directly to the second-floor security zone.

Departure Hall 1 will also be fitted with a new group of lifts, stairs and escalators on the far left. This route will enable passengers who have been through security to head back down to Departure Lounge 1 (the shopping area behind Departure Hall 1). The escalator is already in place at this location, along with the steel construction for the lift. We are now about to start work on the glass.

Will you be travelling through Departure Hall 1 towards the end of November? Chances are that you will go through security at our new flagship location: the mezzanine. The work on this project is currently bang on schedule. The extension of the second floor is now completely finished and closed off, including the final section: the space created by the demolition of the central group of lifts, stairs and escalators that used to grant access to the Panorama Terrace. This will be the site of new rest areas for the security staff.

On the rest of the second floor, tiles have now been laid and a ceiling of cooling panels and wooden slats is currently being installed. These cooling ceilings are necessary to properly dissipate the heat generated by the equipment in the security lanes and keep Departure Hall 1 at a pleasant temperature.

In short, everything is rolling along beautifully. At the beginning of September, we will start bringing the security lanes into position. It won’t be long until everything is in operation. We just can’t wait!