Flying through clouds is always quite the experience. However, clouds can sometimes be an obstacle when it comes to landing a plane, especially when they are low hanging or if it’s foggy. That’s because the runways and flight paths are less visible to pilots and air traffic controllers. It may even be that another runway is required at these times. In this blog, we explain how planes can safely fly to and from Schiphol in foggy or misty conditions. 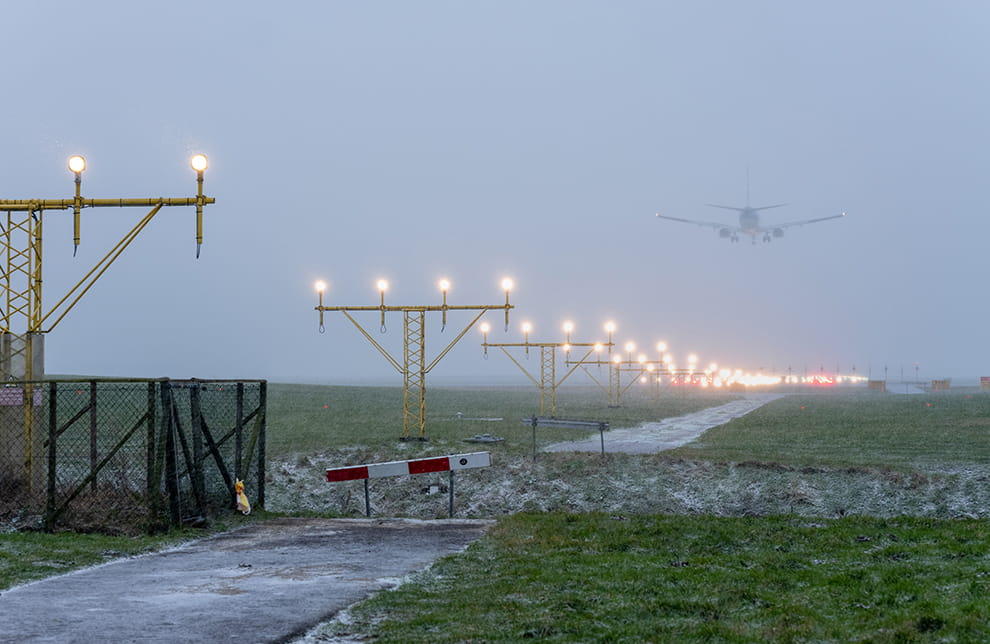 What does reduced visibility mean?

Reduced visibility is when air traffic controllers and pilots can see less than five kilometres into the distance. We call this Runway Visual Range (RVR). We also talk of reduced visibility when the bottom of the clouds is less than 300 metres (1000 feet) above the ground (low-hanging clouds). If visibility is less than 1500 metres and the cloud base lower than 100 metres (300 feet), pilots and air traffic controllers no longer have a sufficient view of the runways and taxiways. We then talk of Low Visibility Procedures (LVP).

There are four phases to LVP – A, B, C and D (with D representing the worst visibility conditions).

Adjustments to runway use

Safety is the utmost priority. At times of poor visibility, there is a risk of aircraft collision due to air traffic control not being able to see them. When it’s foggy or when there’s low-hanging cloud, only runways that are ‘independent’ of each other can be deployed. This means that the risk of planes colliding with each other is as low as possible.

The worse the visibility, the more safety measures are taken at Schiphol. Runways are secured with stop bars at the entrances and exits, aircraft fly further away from each other, runway use is adjusted, works on airport grounds are limited or halted and traffic controllers actively guide pilots when taxiing at the airport. Thanks to tools like the Instrument Landing System (ILS), aircraft can continue to land even when visibility is reduced.

Keeping more of a distance

The lower the visibility, the more aircraft need to keep a distance from each other during their approach. This means that fewer aircraft per hour can land on the same runway. Or that aircraft cannot depart from Schiphol. That’s why fog, mist and low-hanging cloud may lead to delays and sometimes even flight cancellations.