Baggage process: A roller coaster for cases and backpacks

You place your case on the belt at the check-in desk, breathe a sigh of relief that the monster weighs less than 20 kg and eventually spot it several hours later on the baggage belt at your destination. The good news is that everything went smoothly, yet again! So what route does your case take to get from A to B? 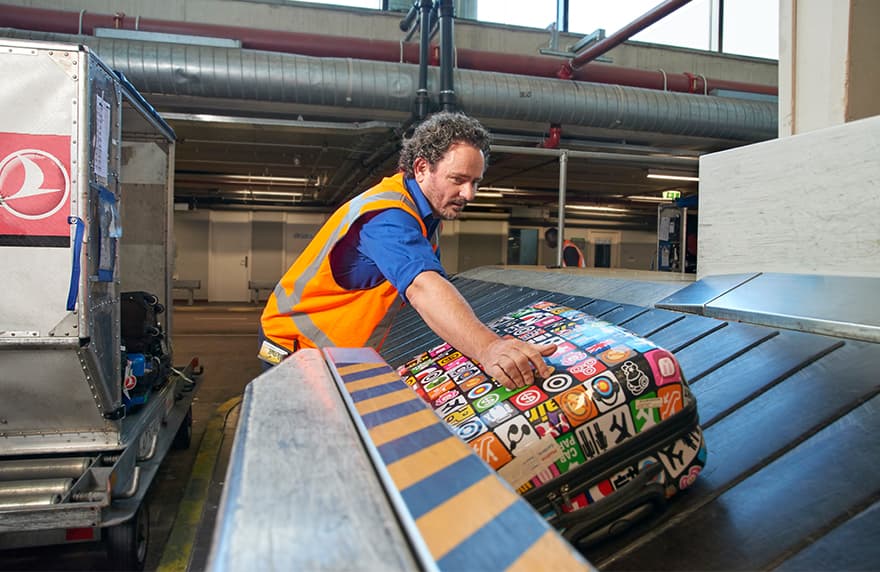 Schiphol has three storeys, although you only get to see two of them. The first floor with departure halls and the ground floor with its stores, restaurants and arrival halls. If you delve deeper, you’ll find a huge cellar with four baggage halls: together, the size of 16 football pitches. They are located some 13 m below sea level with walls 1.1 m thick in some places, especially designed to keep the groundwater out.

So how do the cases get there? When you check in your baggage, your case is given a label. This is read by a scanner and an automated system ensures that your case ends up on the right carousel. From there, your case heads to the right underground baggage hall. All of them are slightly different. One hall processes transfer baggage from scheduled flights while another deals with charter flight luggage. The latter has a simpler design because less baggage sorting is involved.

So what happens if you check in early and your baggage doesn’t go straight into the aircraft? In that case, your case is stored in one of the buffer zones, where around 8,100 items of baggage can be stored. When the aircraft is ready for departure, your case returns to the belt automatically. At Schiphol, there are more than 30 km of baggage belts. The longest distance a case can cover in one go is around 2.5 km. Just like an enormous roller coaster!

Robots and machines take care of much of the baggage handling. But some things require the human touch. For example from the coordinators in the control room. They keep an eye on everything, with the help of 200 cameras. If something goes wrong, they immediately call in the technicians to resolve the problem. On and around the apron, a lot of work is also done by people. These include the baggage handlers, whose work includes loading and unloading cases on the baggage belts and aircraft.

Interested in finding out more? Read more about the airline process