Did you know…fact sheets: Fun facts in a fact sheet

Are you hungry for more information about what is happening on and around Schiphol Airport? Then you will find even more fun facts and background information in the factsheets below. We have made small 'booklets' for various themes. You download these factsheets as pdf and can read them where and when it suits you.

Schiphol's key figures about 2018 at a glance. 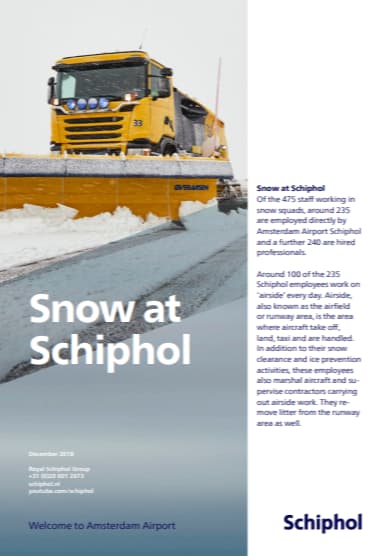 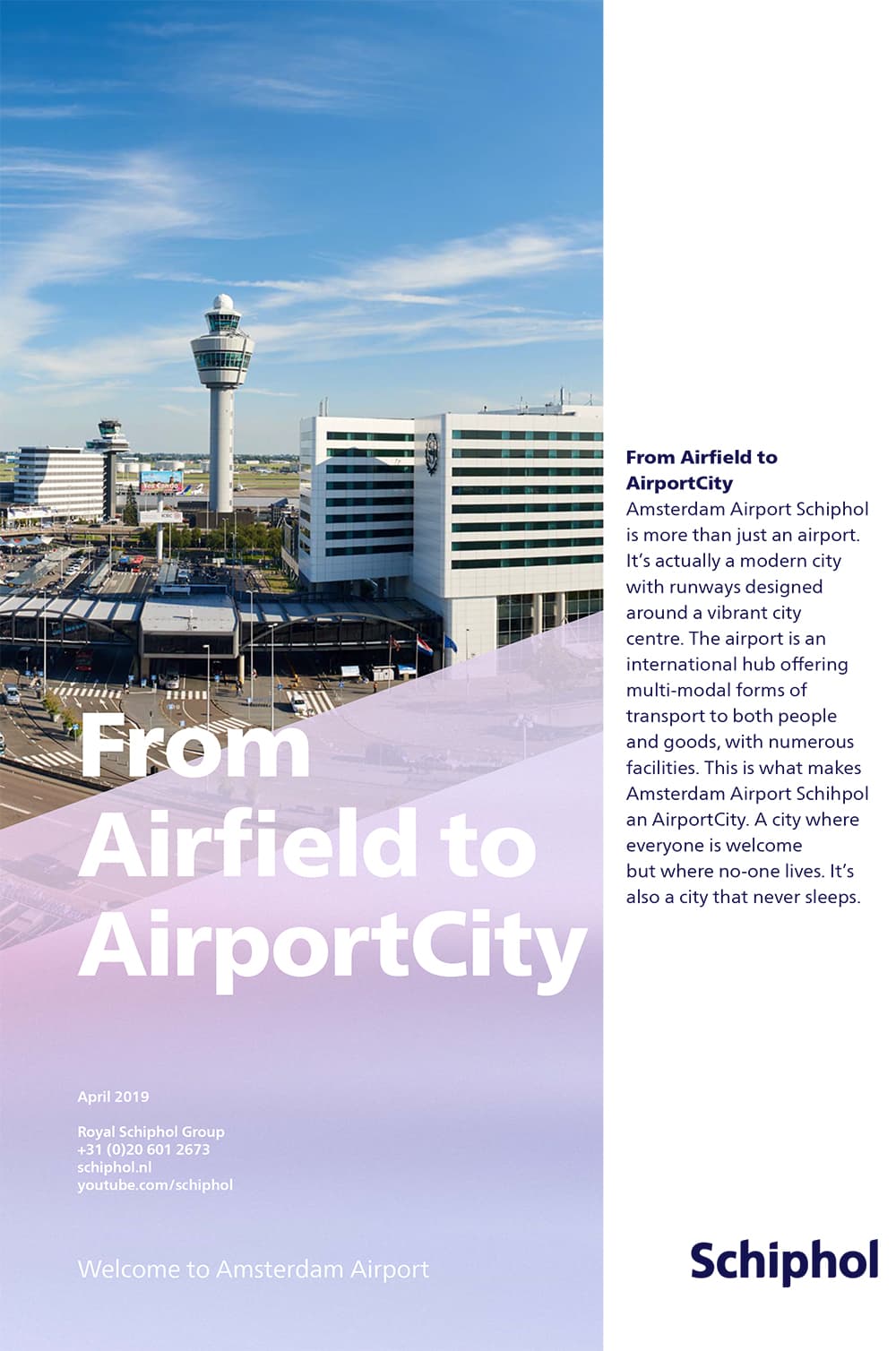 From Airfield to AirportCity 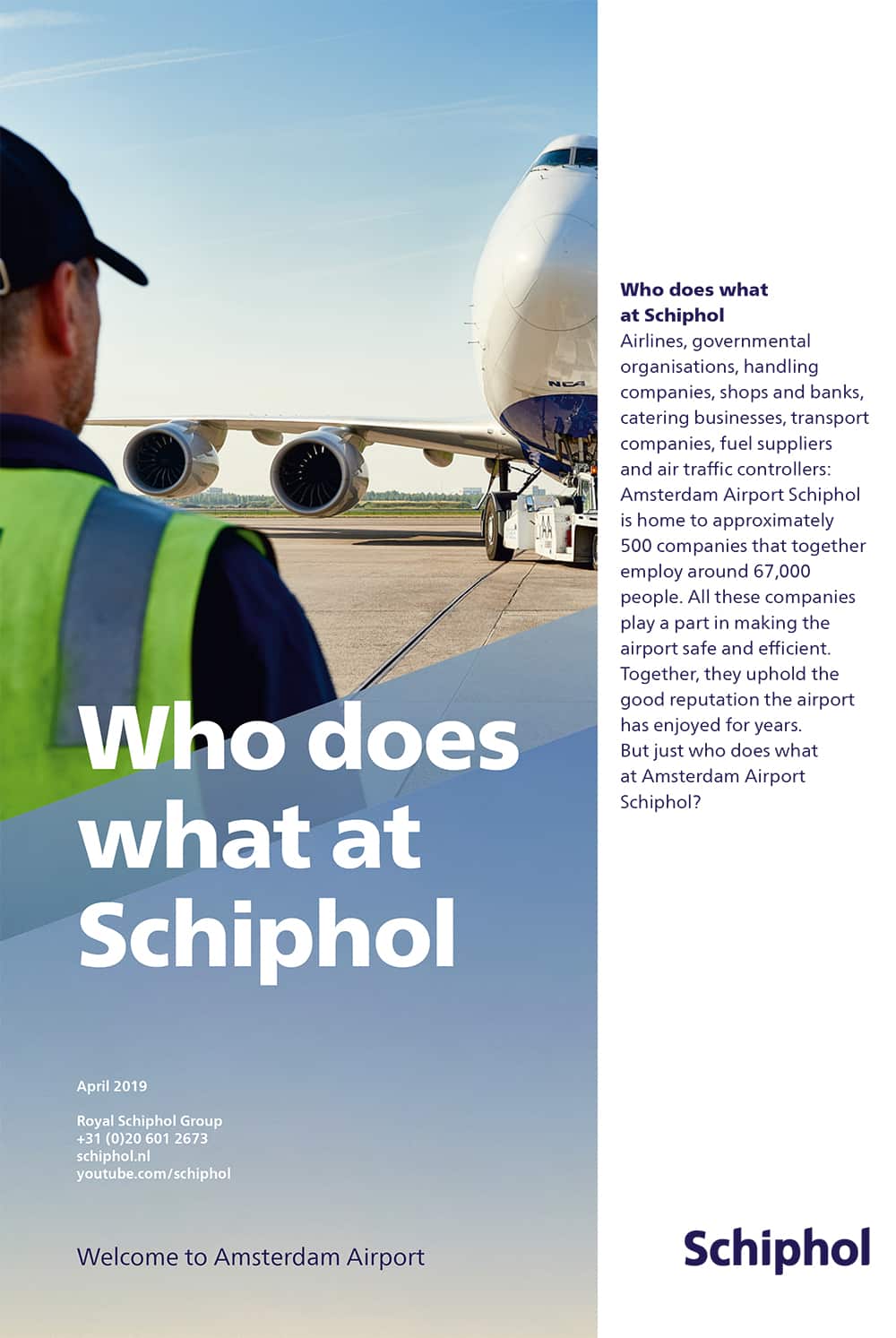 Who does what at Schiphol 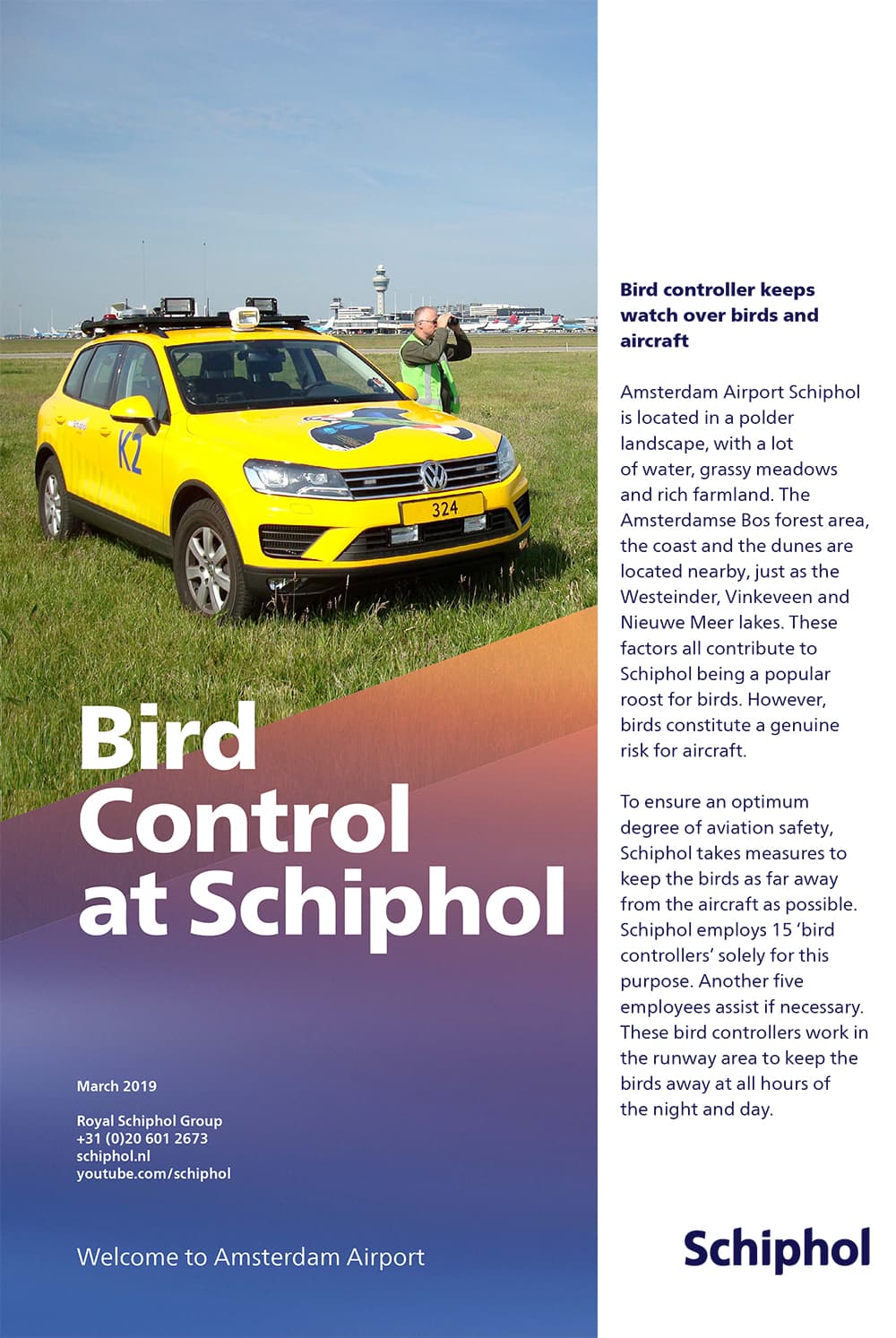 Schiphol is located in a polder landscape, with a lot of water, grassy meadows and rich farmland and other nature reserves. It makes Schiphol particularly attractive to birds. However, birds constitute a genuine risk for aircrafts. In order to keep air traffic safety as optimal as possible, Schiphol deploys 15 'Bird Controllers' to chase the birds, 24 hours a day. 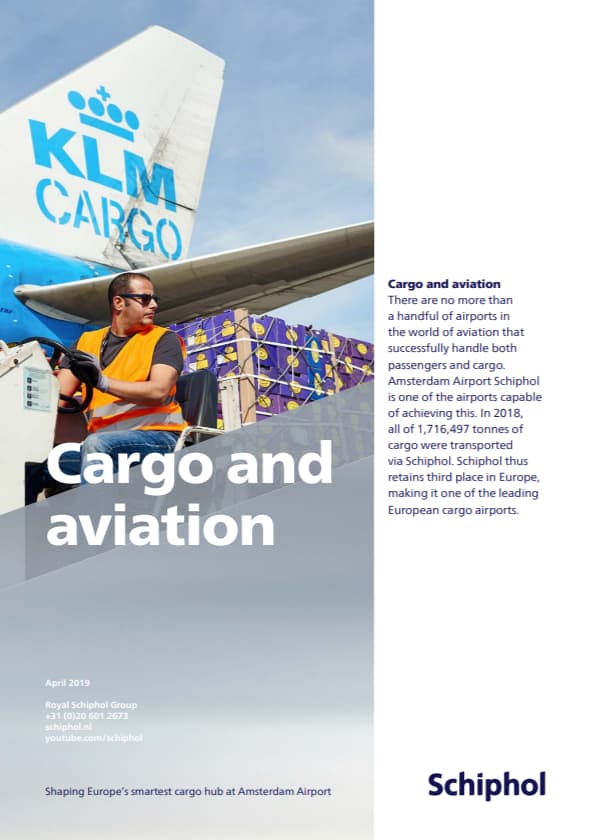 There are no more than a handful of airports in the world of aviation that successfully handle both passengers and cargo. Amsterdam Airport Schiphol is one of the airports capable of achieving this. In 2019, all of 1. 57 million tonnes of cargo were transported via Schiphol. Schiphol ranks fourth in Europe, making it one of the leading European cargo airports. 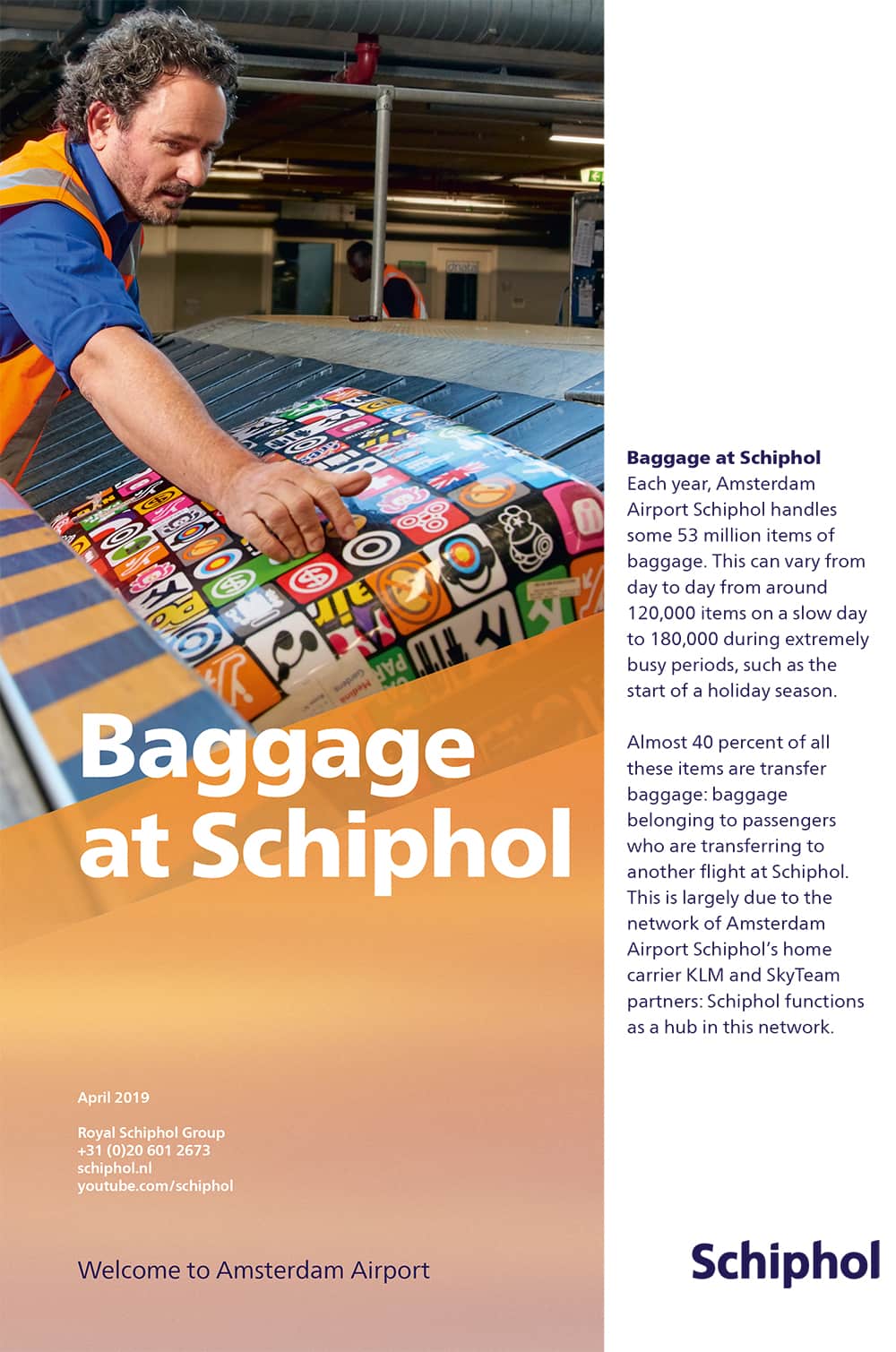 Each year, Schiphol handles some 53 million items of baggage. This can vary from day to day from around 120,000 items on a slow day to 180,000 during extremely busy periods, such as the start of a holiday season. Almost 40 percent of all these items are transfer baggage. 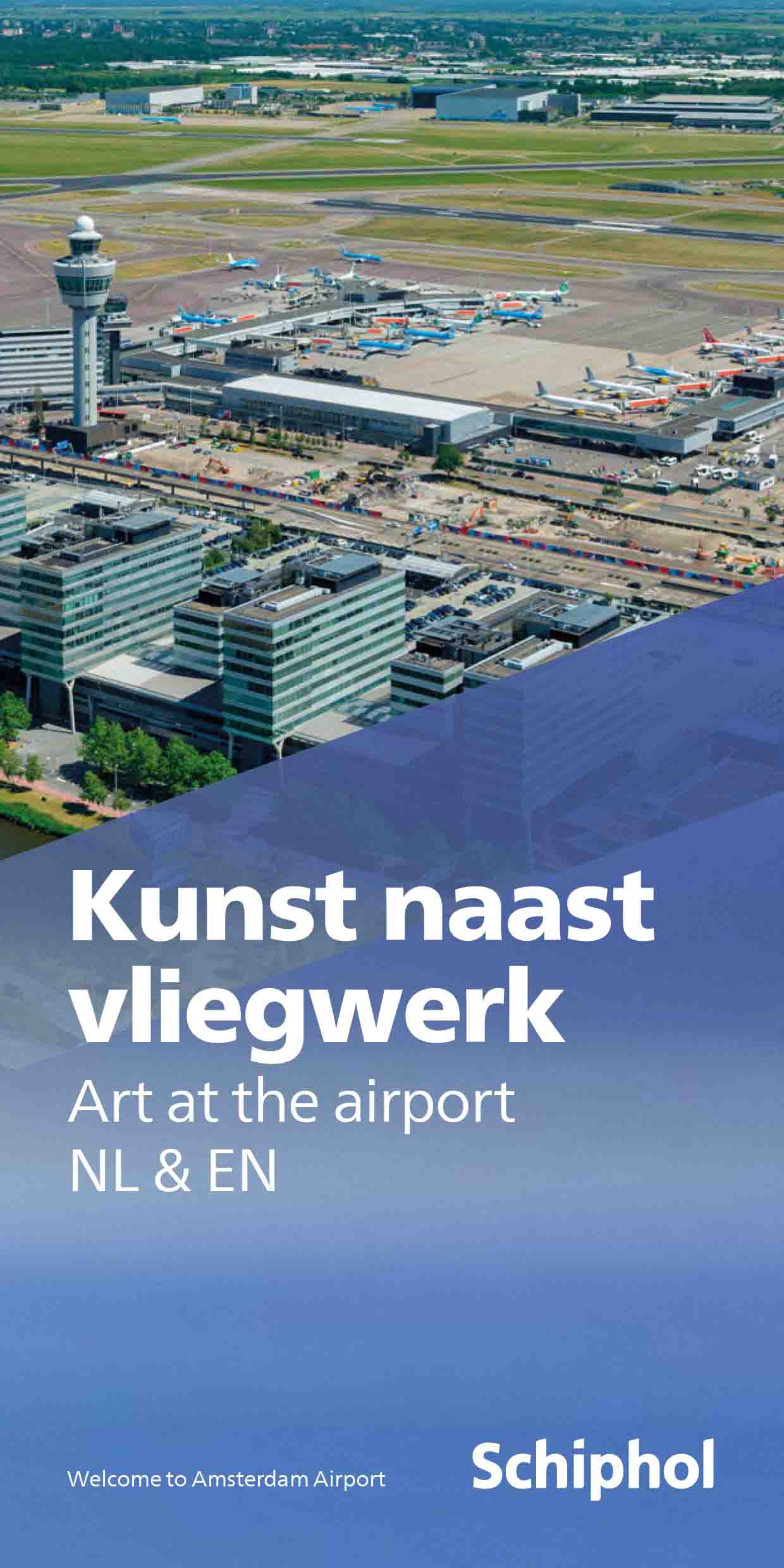 Art has a special meaning at Schiphol. In contrast with the private art collections held by most other businesses, most of Schiphol’s art is encountered in public spaces. It adds human perspective and creates restful focus points. With art, we aim to inspire and make Schiphol more aesthetically pleasing. We hope that it puts a smile on the faces of passengers, visitors and employees alike, even in the hustle and bustle of the airport’s operational and commercial dynamics. Many artworks feature typically Dutch elements and themes, which contributes to Schiphol’s unique sense of place