Where does an aircraft get its electricity from when standing at the gate? Just like a boat in a harbour or caravan at a campsite, it comes from an external source. Schiphol has developed a way for that to happen sustainably: using an extremely powerful power bank. Our power bank (a GPU in technical jargon) is a world-first and has attracted international attention. More and more airports want one too. 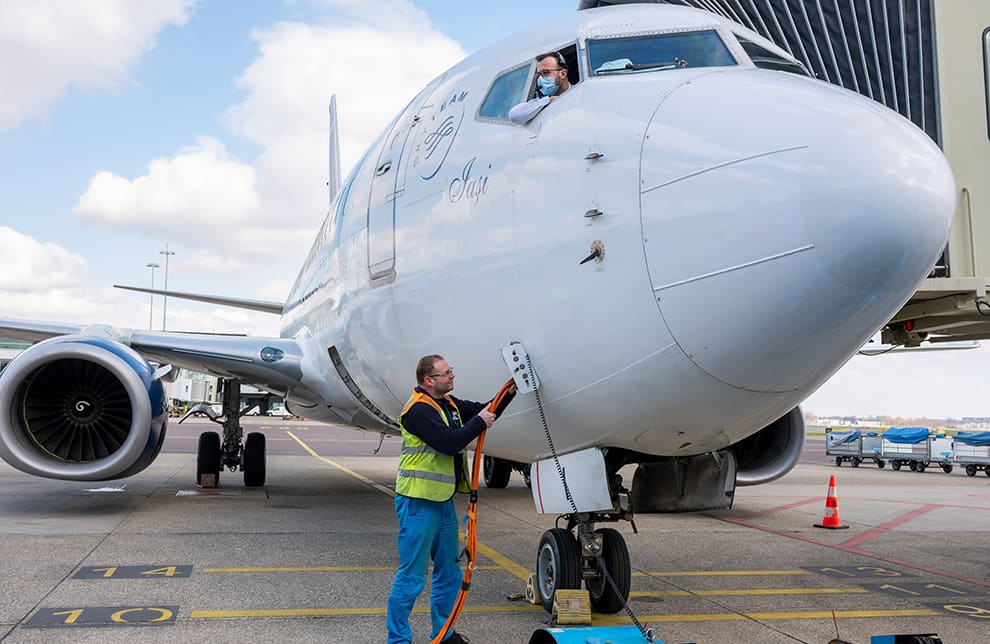 After an initial development and test phase, we started using 5 of these special power banks at D-Pier at the beginning of March. We have been using them at gates D31 and D29, the starting point of many European flights. The objective of this pilot is to find out what we require in order for GPUs to be used throughout the airport. Because that will take quite some organisation.

For food, drink, light and ventilation

Why does a plane need power while stationary? Perhaps you have never really noticed, but many different systems are running when you board an aircraft: lighting, ventilation, fridges, computers in the cockpit. They all require electricity. In the air it's easy – electricity is generated by the jet engines. However, they are not allowed to be turned on while a plane is on the ground, and aircraft do not have a battery on board.

For a long time, stationary aircraft had two options: power from the auxiliary engine in the tail or from a portable generator (known as a Ground Power Unit or GPU in the aviation world). The auxiliary motor runs on kerosene and a GPU on diesel, which is not very environmentally-friendly. They produce quite a lot of CO2 emissions – something Schiphol wants to be rid of.

The first step in the right direction was the installation of Fixed Power Units at the gates. These provide aircraft with what we call shore power. And seeing as Schiphol only uses green energy, there are no carbon emissions involved. 73 out of the 128 gates at Schiphol now have this kind of unit. Just like caravans at a campsite, an electrical cable goes from the unit to the plane. The difference is that these cables are a great deal thicker and a lot more power travels through them.

Green energy instead of diesel

However, not all gates have a Fixed Power Unit (although they will soon). And if it's busy, not all planes can park at a gate and so they have to park elsewhere. This means that some aircraft still require portable diesel generators. Schiphol's goal is to not produce any CO2 emissions by 2030 and so we came up with a solution: the e-GPU, an extremely powerful portable Ground Power Unit that runs on electricity. This was developed together with ITW, our power unit supplier.

It doesn't look that special at first glance; it's a box on wheels measuring around 2 by 5 metres. But inside the e-GPU are 4 highly powerful batteries. Once we have the results from the pilot, we will know what is needed for these to be introduced throughout Schiphol. The diesel GPUs can then be phased out. And we'll be another step closer to an emission-free Schiphol in 2030.