What is Schiphol doing to reduce the CO₂ produced by your flight? From the moment you leave home to when you’re up in the air, we take all kinds of measures. We believe that flying should be accessible to all. But it does need to change. We strive towards meeting the Paris Agreement targets. That’s why our CEO is participating in the climate summit in Glasgow. 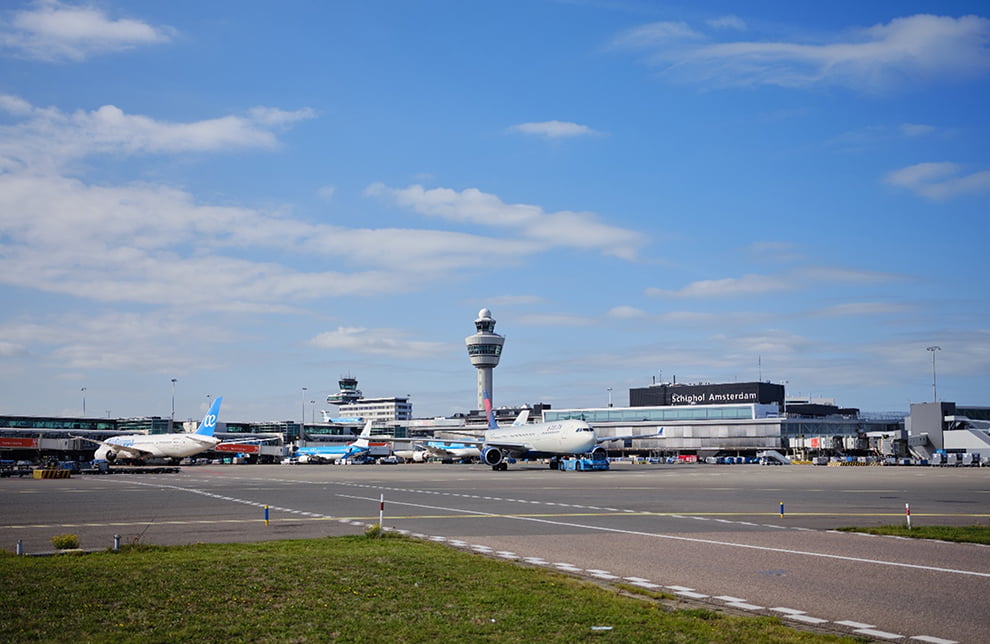 Schiphol has set ambitious targets in order to meet the Paris Agreement’s demands. We want to be an emission-free airport in 2030. And aviation will be CO₂-neutral in 2050. We have been working hard to achieve this for many years already by reducing the use of fossil fuels. What other measures do we take?

Getting to Schiphol: electric buses, taxis and trains

Sustainable and comfortable. That’s our priority when it comes to your journey to and from Schiphol. The most sustainable way to travel is by electric public transport. If you take the bus to Schiphol, it’s likely to be an electric one. There are around 200 of them at and around the airport, and that number keeps growing. The Schiphol train station is below the terminal, which makes travelling by train an attractive choice. There are many direct connections from Schiphol too. If you prefer to travel by taxi, then make it an electric one. You’re certainly in the right place with the official Schiphol taxis.

Schiphol airport has been CO₂-neutral since 2012. We achieved this by reducing and offsetting emissions. One of the ways we lower emissions is through the deployment of electric vehicles. And there are more and more of them – from the buses that take you from the plane to the terminal, to baggage tractors and catering vans. And did you know that Schiphol is powered by Dutch wind energy? If you charge up your phone or laptop in the terminal, you are using green electricity. We cool and heat the terminal using thermal energy and there are solar panels on many of our roofs.

In the air: encouraging cleaner planes and the development of sustainable kerosene

Schiphol has been committed to making international aviation more sustainable for years. And it’s not just us; the whole aviation sector invests in this. What is Schiphol’s contribution? We invest in the production of sustainable fuel and in the development of new kinds of fuels. We also back electric flight trials and encourage the acquisition of less polluting aircraft. Airlines using cleaner planes pay less to land at Schiphol.