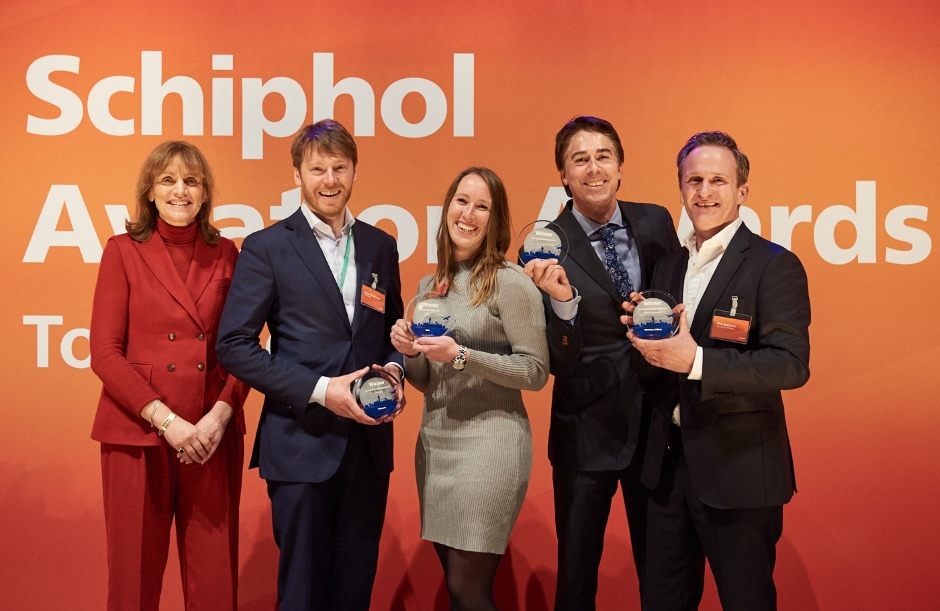 The annual awards ceremony is organised by Schiphol Group to recognise customers and business partners that have made an especially strong or positive performance to the airport community during the year.

The awards evening concluded with a networking dinner for members of the airport community to celebrate the efforts and achievements of the year.

KLM Cargo
KLM Cargo is a key driver for Cargo Community projects. The airline invests in data, planning, and procedures, and is the front runner in major projects such as the Smart Cargo Mainport Program, and the Holland Flower Alliance. KLM is Schiphol’s largest carrier in cargo volume and air traffic movements.

The other nominees were Turkish Cargo and AirBridgeCargo Airlines.

Transavia
Transavia contributed to the mainport network with the introduction of two new destinations, Katowice and Tirana, and six new routes: Munich, Helsinki, Belgrade, Zurich, Ljubljana, and Sofia. The Dutch airline has also made a major contribution to transparency and data exchange and scored very well on innovation, for example with a better process for hand baggage.

The two other nominated parties were easyJet and KLM.

American Airlines
Dallas/Fort Worth International Airport was added, a new destination to Schiphol’s network. American Airlines is a good partner in innovative projects and transparent in sharing data. The carrier was and still is a front runner in a fast & efficient handling process, as exemplified by joining self-service drop off, known as CUSSDOP.

Besides American Airlines, Jet Airways and KLM were also nominated.

KLM
KLM is increasingly integrating sustainability into its business operations and has taken great steps to reduce its environmental footprint. The renewal of its fleet is one example, with the phasing out of the Boeing 747 and saying farewell to the Fokker fleet. The use and further development of biofuel also contributes to lower emissions. On the ground, its efforts and progress in the transition to electrically powered equipment sets a true example.

Vanderlande and TUI fly were the other nominees in this category.

Schiphol offers 525.000 m2 of cargo warehouses, of which 40 per cent have direct airside access. This includes facilities for perishables and pharma/life science cargo in multiple controlled-temperature zones, featuring refrigerated/deep-freezer and heated storage/handling facilities.

Over 150 logistics service providers are situated in the airport region, with over 50 per cent of all American and Asian European Distribution Centres located in the Netherlands.

Schiphol benefits from close proximity to the Ports of Rotterdam and Amsterdam and an unparalleled European road feeder and distribution network.