MG Motors: The Launch of a Legacy

When is a product launch more than ‘just’ a launch? When it reintroduces a brand with a 95-year legacy. For MG Motor Europe, re-entering the European market for the first time in 15 years meant giving the company’s history a very modern twist. A product aimed at future-focused, eco-conscious urban drivers. And a prominent place at Schiphol for the launch. Natalia Borisova, MG Motor Europe Brand Manager, explains why the airport was the right fit for the campaign. 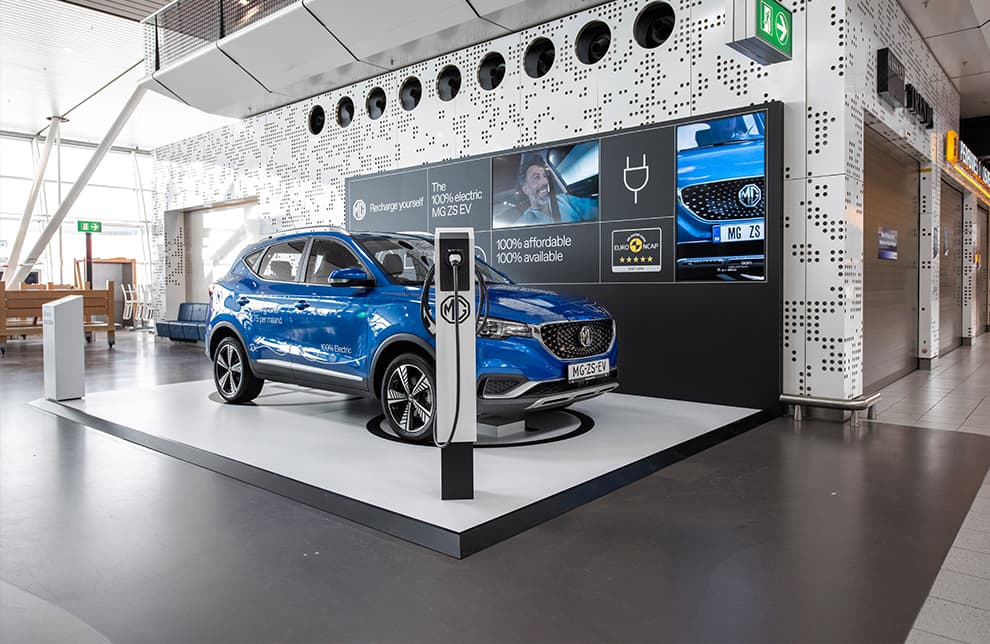 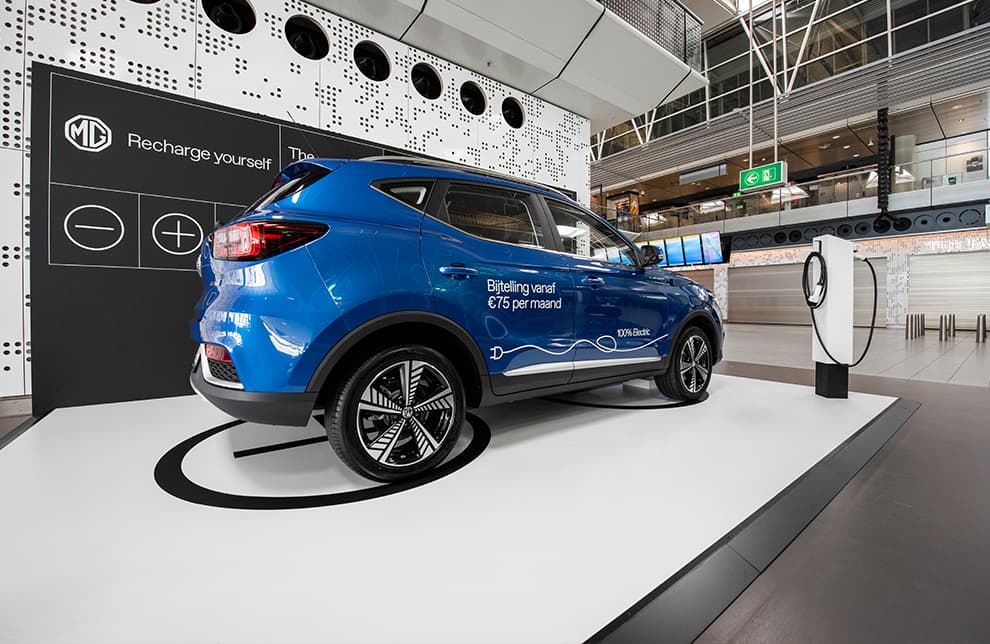 Back to the future

When many people think about MG, they probably envision those classic little sports cars zipping along British motorways in the 50’s and 60’s. But these days, MG is positioning itself in a modern market: affordable, fully electric vehicles. For the past 15 years, MG has been active in the UK, South America, Australia, India and the Middle East. But in 2019, they established a European Headquarters in Amstelveen, the Netherlands, and introduced a complete, electric-only line of affordable cars. And what better place to boost brand awareness than one of the busiest airports in Europe?

On 2 June, the MG ZS EV model rolled into Schiphol and ‘parked’ in Lounge 3. It was accompanied by an extensive display that includes TV screens showing brand campaigns and features films, iPad stations for scheduling test drives and receiving offers, and lightboxes throughout the airport to draw attention to the campaign. MG Brand Ambassadors will be at the display to provide more information.

The campaign’s primary goal is to raise brand awareness and generate leads. Especially from future-focused, eco-friendly urban commuters looking for an affordable electric car. Starting at €29,990, the MG ZS EV is loaded with features and drives like a dream. MG also aims to target businesses looking for a great electric car for their company car fleet. Targeting business travellers moving in and out of Schiphol was a logical addition to the campaign.

The campaign was originally scheduled to start in March, until coronavirus put all plans on hold. Natalia credits Schiphol’s flexibility and understanding as the reasons why it was possible to postpone the campaign launch until travel started to become feasible again. Especially in the next few months, Natalia expects business travellers to be the first to start filling Schiphol’s halls again: just the audience the campaign targets.

A short-run campaign is not likely to have a major impact on brand awareness. So the MG display is scheduled to stay at Schiphol until December, giving MG plenty of time to reach passengers and share its message with Dutch and international travellers and their families. 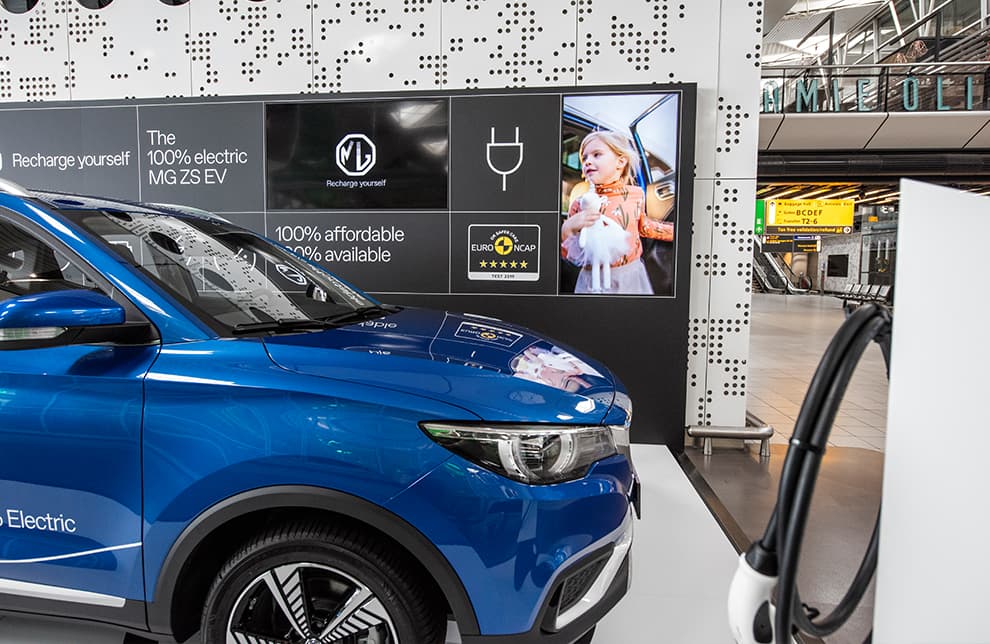 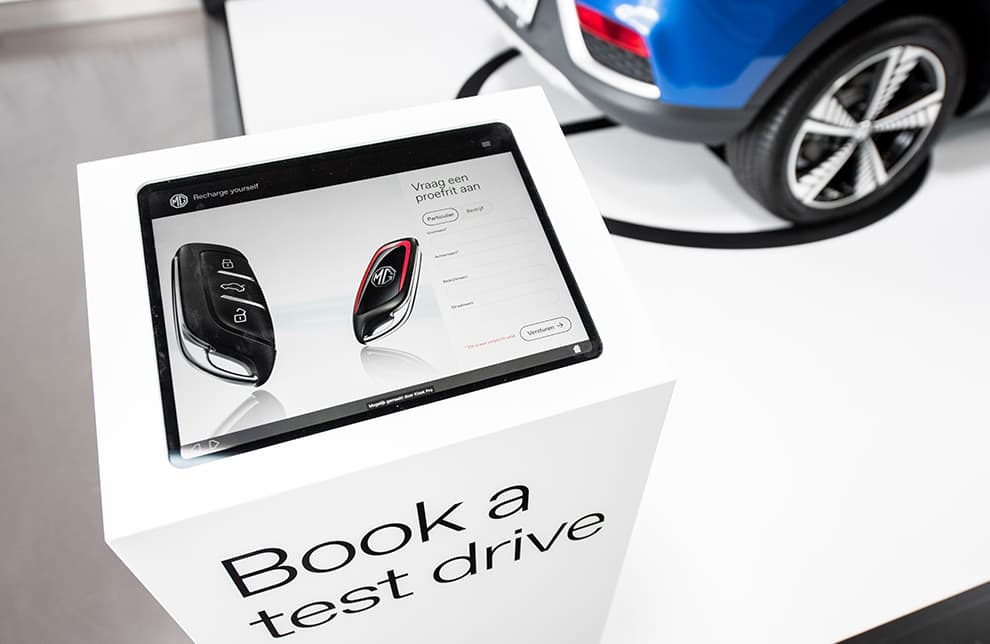 The road to recovery

Thinking of launching a product at Schiphol? Natalia advises that you plan ahead. Prime advertising locations at the airport are often booked long in advance. And coronavirus is not a reason to postpone your planning – many brands are still scrambling to take their place in the Schiphol landscape.

And for those worried about the effect of COVID-19 on travel, Natalia encourages brands to be brave. While the timeline for recovery may still be uncertain, the recovery itself will certainly occur. And soon, Schiphol will once again be the bustling airport it was before the pandemic.

‘Business travellers are a big part of our target demographic, and there’s no better place than Schiphol to reach them. But it was Schiphol’s flexibility, quick response and professionalism that made it possible to postpone the campaign until the travel industry got moving again. We’re confident that the campaign will be a success.’