On 24 August, an electric aircraft landed at Schiphol for the first time. It was a Pipistrel Velis Electro – a two-seater research aircraft from the Netherlands Aerospace Centre (NLR). The plane is helping the NLR gain experience and knowledge about electric flight. 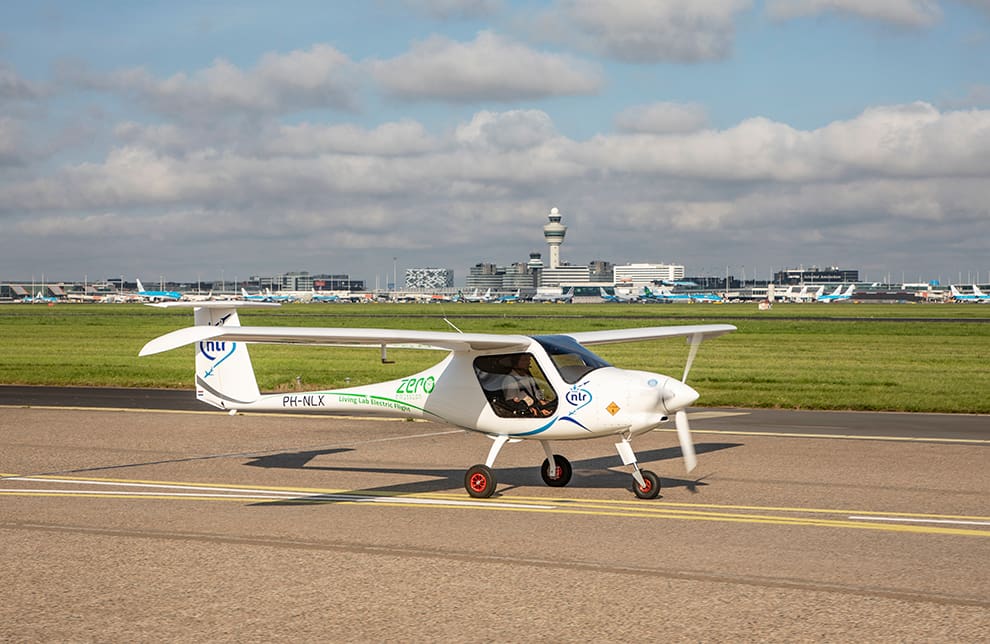 Flying above the Netherlands on electricity

The Pipistrel’s home base is Rotterdam The Hague Airport, part of Royal Schiphol Group. Between 24 August and 3 September, the NLR made several electric flights in the Netherlands with the Pipistrel. The aircraft landed at various airports, including Schiphol and the other Schiphol Group airports Lelystad Airport and Eindhoven Airport. The aim of this flying tour of the Netherlands was to accrue flight hours and gain more experience and knowledge about electric flight.

Schiphol Group is committed to sustainable aviation and our goal is for flying to be climate-neutral by 2050. Electric flight can significantly lower the CO2-emissions produced by short haul flights. That’s why we are encouraging flying on electricity and supporting the Power Up start-up. Eindhoven Airport, Rotterdam The Hague Airport, Maastricht Airport and Eelde Airport are all participating in this start-up. Power Up is a living lab for electric flight. It is studying the feasibility of flying on electricity and looking at the possibility of a network between various regions in Europe.

Sustainable fuels will be the main driving force behind sustainable aviation in the short term and when it comes to larger aircraft. Schiphol is therefore contributing to the development and production of sustainable fuels like biokerosene, synthetic kerosene and hydrogen. For some time now, we have advocated the mandatory mixing of sustainable fuel (14%) with traditional kerosene in order to encourage the use of sustainable fuels and advance their production. We are therefore pleased that the European Commission is taking a step by introducing a 5% blending mandate for all EU countries as of 2030.

Watch the Pipistrel land at Schiphol