News: Schiphol to run on wind power from 2018

From 1 January 2018, Schiphol will be run entirely on renewable electricity generated right here in the Netherlands. To achieve this goal, an agreement between Eneco and Royal Schiphol Group was signed on Monday, 14 August. 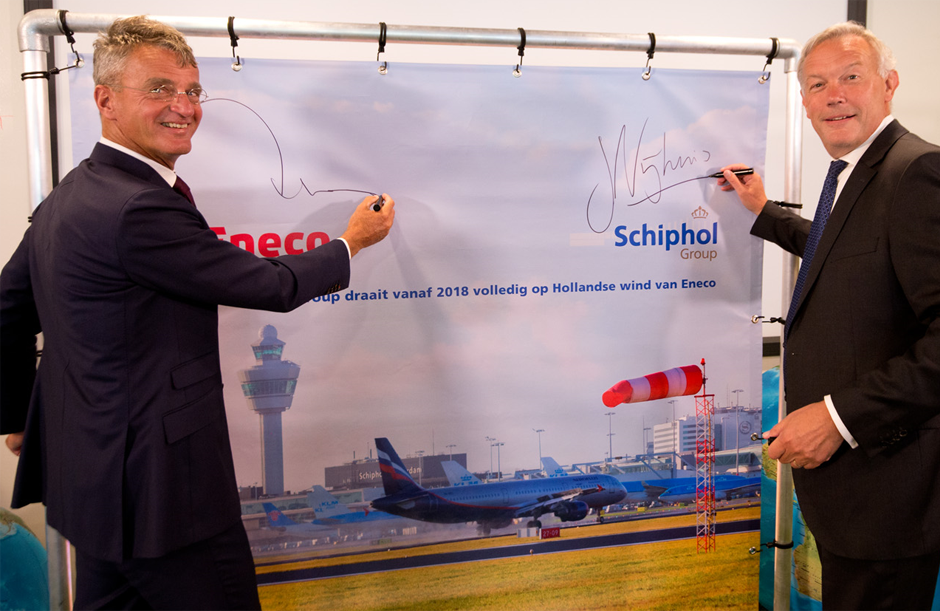 Eneco supplies renewable energy to Schiphol, Rotterdam, The Hague, Eindhoven and Lelystad Airports. All 5 airports combined consume approx. 200 GWh of power and all the sustainable power comes from Dutch wind farms. That way, Royal Schiphol Group is also contributing to the acceleration of sustainable energy production in the Netherlands.

Jos Nijhuis, CEO of Royal Schiphol Group, said: ‘A full transition to sustainable energy has been a long-standing wish for us. We want to make sure that every innovation we make is more durable than what we already have. On one hand, we are committed to taking this position as a major organisation, especially within the transport sector. On the other hand, we are convinced that we can only make a positive contribution to the future if we add sustainability to our economic added-value”.

Sustainable and safe performance is one of Schiphol’s 5 strategic pillars. We want our airport to be sustainable, but we also want to play a leading role in the sustainability sector. Among other things, we are focused on the implementation of CO2-neutral operations, sustainable growth and being waste-free by 2030.

For more information, please refer to the press release.

View the video about the partnership between Royal Schiphol Group and Eneco about renewable energy.