Have you ever flown from Schiphol with KLM Cityhopper? Then you probably boarded the plane at the Regionals Platform. That’s not a name you need to remember, it’s only used by people who work at Schiphol. But it is well worth remembering that the platform was upgraded as sustainably as possible last year. 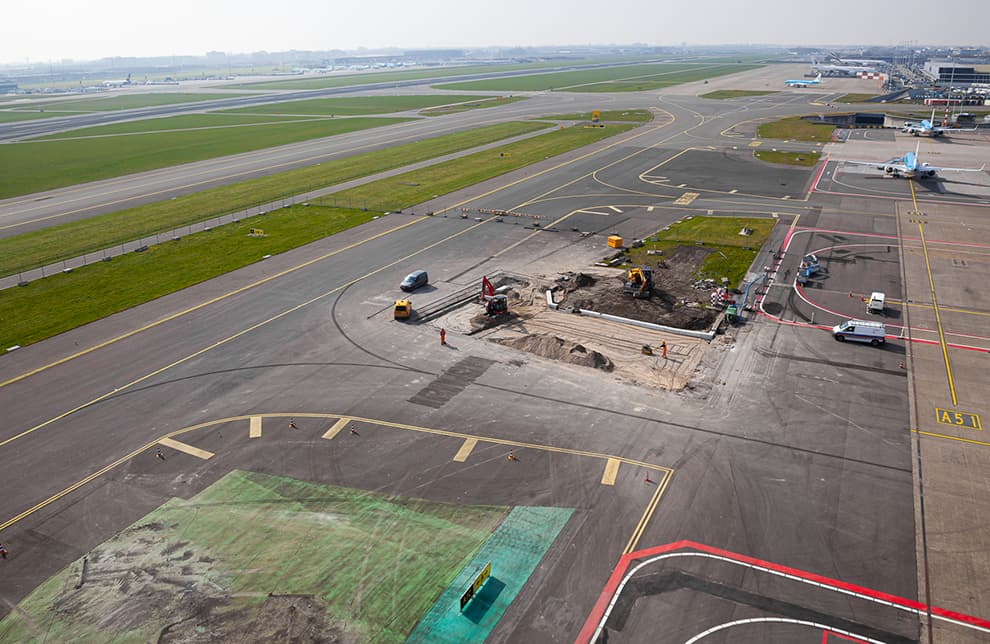 This upgrade was necessary because KLM Cityhopper renewed their fleet. Several older planes were replaced with the cleaner and quieter Embraer E195-E2. And that’s great news. The only thing is that these new aircraft are wider and longer than the previous planes. And that had consequences for Cityhopper’s base at Schiphol – the Regionals Platform.

The platform hasn’t been expanded, just upgraded. That was done as sustainably as possible, which meant minimal changes and maximum recycling. The parking spot markings were redone and LED lights were installed in the enormous light towers. In addition, the number of charging stations was increased considerably. This means that handling companies can easily make the switch to electric vehicles. The conveyor belts used to load your baggage on the plane tend to be powered by electricity rather than diesel now. The same goes for the baggage tractors.

The taxiway ramp was widened for safety reasons; new aircraft are around 7 metres longer and wider. Many extra square metres of asphalt therefore had to be laid. This was also done as sustainably as possible. Mainly recycled asphalt was used. Some of it included asphalt from the Polderbaan Runway that became available during maintenance works.

Encouraging contractors to be more sustainable

Schiphol does not carry out its own upgrades; they are done by our contractors. Schiphol’s goal is to be an emission-free and zero-waste airport by 2030. That’s why our contractors are working with more and more electric vehicles. And we recycle as much material as possible at the airport, which saves quite a few transport kilometres. This way of working was applied at the Regionals Platform too. So, perhaps it’ll feel a little different when you next board a Cityhopper.