Let’s Power Up for electric flight in Europe!

Imagine being able to fly between different regions in Europe in an easy, fast, cheap and emission-free way thanks to a network of airports connected by electric aircraft. An unachievable ideal? Not if the bright minds at Power Up have anything to do with it. 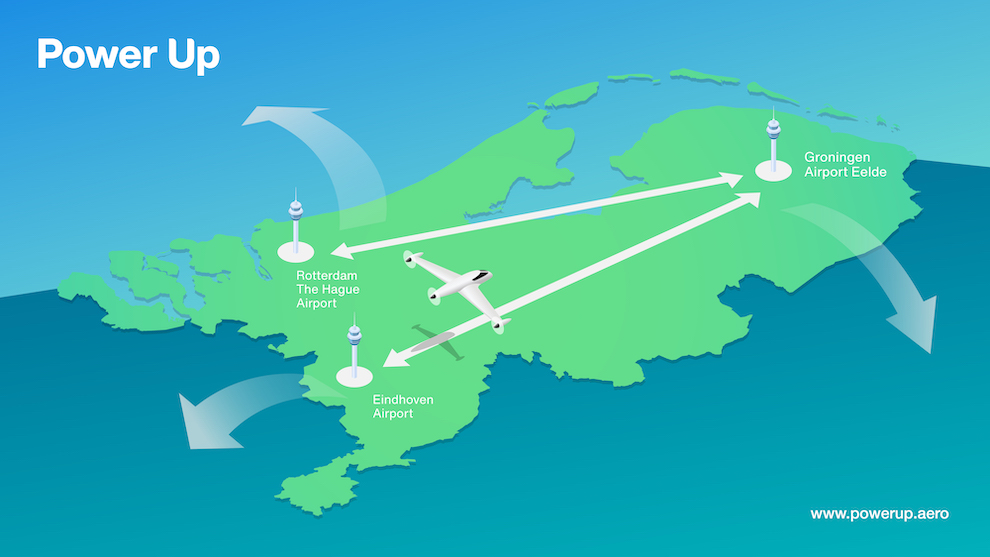 The possibilities of electric flight

Power Up is a collaboration between Eindhoven Airport, Rotterdam The Hague Airport, Groningen Airport Eelde and Maastricht Aachen Airport. They are working together to learn more about the possibilities of electric flight. All four airports are supported by Royal Schiphol Group and the Netherlands Aerospace Centre (NLR).

The Power Up participants believe that flying on rechargeable battery power is possible. The rapid development of batteries in the automotive industry also provides opportunities for the aviation sector. There won’t be long-distance flights to places like America or Asia any time soon, but it should be possible to transport a few dozen people 500 to 1000 kilometres at some point in the near future. And that’s a significant distance in compact and densely-populated Europe.

Deploying electric aircraft to connect regional airports creates a whole new mode of transportation that enables people to travel between regions in a clean, fast and inexpensive way. The great thing is that most of the necessary infrastructure (like runways and terminals) is already in place. And once they are in the air, planes don't take up any space on the ground, unlike rail and road traffic.

What still needs to be done?

There’s still work to be done in order to achieve all this. First of all, there are the electric aircraft themselves. A lot of effort is being put into making the first fully-fledged five- to ten-seater aircraft available within the next few years. On the ground, at the airports, they’re hard at work too. All those electric aircraft will need to be able to charge their batteries without causing local power outages on busy days. Finally, pioneers are needed to develop new models in which all forms of transport (cars, public transport and planes) connect seamlessly.

On our way to electric flight

At Power Up, we learn more and more every day and we ensure that existing initiatives reinforce one another. By leading the way as a living lab for electric flight we can tackle two issues at once. On the one hand, there’s a growth in job opportunities. On the other hand, we’re gaining important knowledge and it’s becoming more attractive for companies to establish themselves here. This is how we hope to make society, politics and investors enthusiastic about the possibilities of electric flight.

This blog was written in collaboration with professor Maarten Steinbuch, Scientific Director of Eindhoven University of Technology.