Increased use of renewable energy

Schiphol Group is transitioning to renewable energy sources. All the airports in the Royal Schiphol Group are 100% powered by wind energy, we use thermal storage to heat and cool more buildings and we are installing more solar panels. Many of our vehicles are already electric and we are continuing to add to their number. 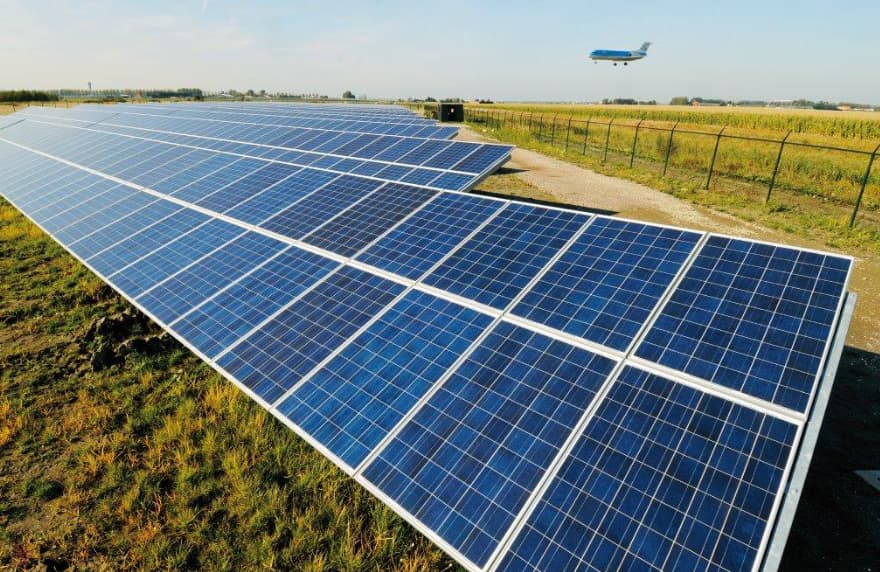 Since 1 January 2018, all of Royal Schiphol Group’s airports have been running 100% on wind power generated by Dutch energy provider Eneco.

Stationary aircraft normally use their kerosene-driven auxiliary motors or a diesel generator to supply electricity and climate control. To reduce this, we have equipped 73 aircraft stands with installations for Fixed Electrical Ground Power (400 Hz) and pre-conditioned air. As a result, aircraft at the aircraft stands no longer need to hook up their auxiliary motors to a kerosene- or diesel-powered generator or a pre-conditioned air unit.

Electricity for the aircraft

Aircraft parked on the apron, rather than at a gate, source their energy from a mobile Ground Power Unit (GPU). Schiphol recently launched a pilot using four electric GPUs that replace diesel generators and help reduce the airport’s emissions. If this test is successful, every aircraft stand that does not currently have Fixed Electrical Ground Power in place will be equipped with an e-GPU.

GTL for traffic on apron

KLM is currently using gas-to-liquid (GTL) diesel for its apron traffic (baggage trains, pushback tractors, loading platforms) as a temporary measure until all these vehicles have been converted to electric power. GTL is a cleaner alternative to diesel that contains smaller amounts of pollutants. Initial measurements suggest that GTL leads to a reduction in nitrogen oxide emissions of between 16% and 18%.

Electric buses on the apron

Schiphol has begun using electric buses on the apron. There are now 53 of these buses in service, transporting around 90% of bus passengers from the gate to the terminal and vice versa and reducing nitrogen oxide emissions by 2.9 tonnes so far.

Many of the buildings – offices, terminal, car parks – at our airports are built and managed to LEED gold certificate standards: the second-highest possible sustainability certificate. To achieve this certificate, buildings are assessed in areas such as water conservation, energy efficiency, material choice, indoor environments and innovation.

Light as a service

Almost all the airport’s halogen bulbs have been replaced with LED lighting in a ‘light as a service’ construction in which the supplier remains the owner of the lighting. This is the best way to ensure sustainability and recycling.

Almost all ground handling activities for aircraft at Lelystad Airport have been converted to electric power.