Have you ever noticed those thin black lines on asphalt roads? Nine times out of ten, these are cover grooves in the road surface used for cabling. The same goes for the black lines you see on Schiphol’s tarmac. But at the new Uniform platform, things are going to be different. We are currently running a pilot to see if the cabling can be moved to casings in the lowest asphalts layers. ‘In the long term, this will be a lot more efficient and cost-effective.’ 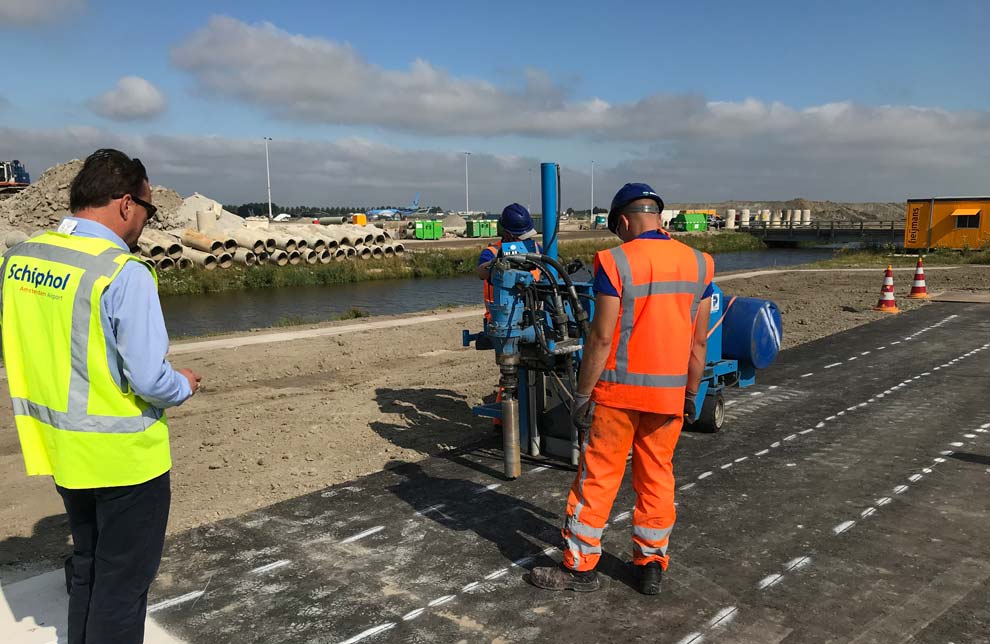 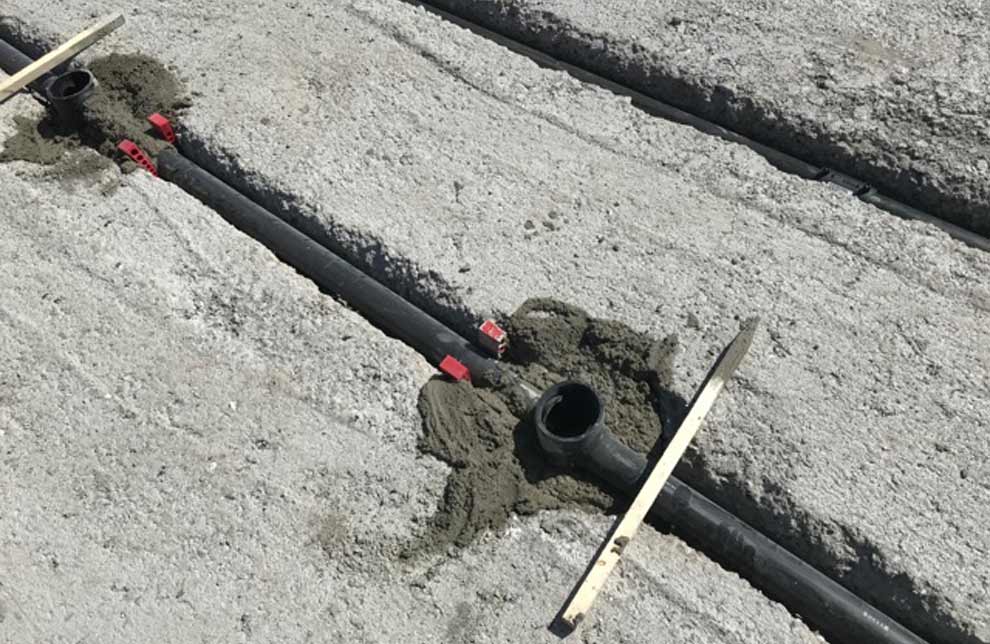 Specialist Eren Kocak drags in a transparent tube filled with various construction materials. ‘The aircraft taxiways consist of a number of different layers,’ he points out. ‘Sand, concrete and then four layers of asphalt of about 20 centimetres each.’ Together with his colleague Edwin Lee, he is heading up the cabling pilot, also known as the tube pilot. ‘This is a completely new approach, both for Schiphol and our contractors.'

The cabling pilot is being conducted near platform Uniform, the buffering location for aircraft in need of temporary parking. Eren: ‘We are currently expanding this platform in phases. As part of the pilot, we’ll be installing the taxiway lighting using the new method.’ Edwin explains what this method entails: ‘Instead of cutting grooves into the upper layer of asphalt, we’re putting casings in the Cement-Treated Base, or CTB, below the asphalt. These casings each fit about six to eight cables, depending on their diameter. The casings are placed at 120-metre intervals along the entire length of the taxiway, and each is connected to a small box allowing for almost any cable to be connected to any base.’

The pilot is ultimately intended to be a test for a new way airport-wide cabling method. ‘It will definitely be used in new construction projects. Uniform is a perfect location for the pilot because we don’t know yet where the fittings for the taxiway lighting are going to be installed exactly,’ Edwin says. ‘Now that the casings have been placed, it’ll be straightforward to lay down the cabling once we’ve received more information about the layout of the taxiways.’

Edwin explains that, in the long term, using casings will prove to be a lot more cost-effective: ‘In the current situation, we damage the cables every time we have to replace the asphalt, once every couple of years. With the casings, the cables remain safely out of harm’s way until the layer of cement below the asphalt needs to be replaced or repaired, which could take decades.’ Edwin adds: ‘It also works the other way around: we don’t have to damage the asphalt just because of a few broken cables. This will make maintenance a lot easier for everyone involved.’

With this new working method, exact measurements are becoming even more important than before. ‘Right now, we only have to look at the lines in the asphalt to know exactly where the cables are. In future, that won’t be the case anymore. This means our blueprints need to be 100% accurate, so that we’re always able to find the cables when we need to,’ Edwin says. In that respect, the project’s contactor, Heijmans, is a great help to Eren and Edwin. ‘They’ve already come up with several ingenious solutions, including a special type of jar that allows us drill down to the casing more easily,’ says Edwin. ‘Around these jars, they’ve constructed boxes to protect them from the heat of the asphalt. The asphalt gets hot quite often, so these are effective, long-term solutions.’