As soon as the last travellers have left Departure Hall 1 in the evening, Nico Bogaard starts his working day. Together with his colleagues from the Operations First construction consortium, a joint venture of VolkerWessels Bouw Schiphol and Engie, he’s building a mezzanine floor, which will soon be home to a brand-new security filter. ‘We work all night to conjure a whole new floor out of thin air.’ 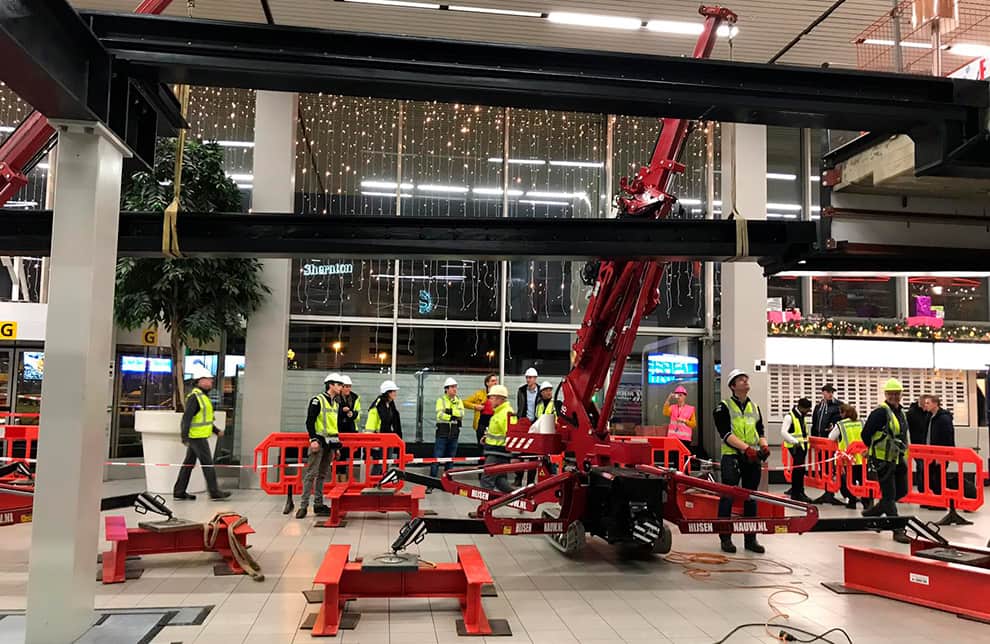 Now for the installation work

Nico, the project’s general foreman, is looking out over Departure Hall 1 from his perch up in the contractor’s office, behind the Balcony Bar. The outlines of the new mezzanine are already starting to take shape. ‘We hoisted in and installed all the steelworks in the weeks leading up to the holidays,’ he says. ‘So now we can get started on the installation work.’ This includes things like the lighting, electrical work, sprinklers and any other systems that need to be installed.

The systems currently being installed by Operations First are intended for temporary use only. ‘Once we’ve wrapped up all the construction work on the mezzanine, we’re going to put in acoustic ceiling tiles,’ Nico continues, ‘which will also serve to house all the permanent systems and installations. But that doesn’t mean we have to do the same work twice over, from start to finish. The sprinklers, for example, which are now pointing up, can easily be turned 180 degrees once the ceiling has been put in.’

Next up: pouring concrete

Now that all the steelwork is in place, Nico is ready to tackle the project’s next phase: concrete. Or, as he puts it... loads and loads of concrete. ‘That part might prove to be a bit of a challenge. The steelworks were a lot like a puzzle – everything had to fall exactly into place. The same goes for the protective plating we’re going to put in soon. But after that’s all done, we’ll have to start pouring concrete, which involves a whole host of other risks. If we want everything to go off without a hitch, a tightly sealed support structure is crucial.

Because construction on the mezzanine can only be carried out once all travellers have cleared the departure hall, Nico finds himself working nights. But he doesn’t mind the hours at all. ‘I love how quiet it is. As soon as the last travellers have boarded their flights, we transform the departure hall into a construction site in the blink of an eye. We then have until just after midnight to do as much work as we can before we have to pack it all in again. Clear away the fences and junk, send in the cleaners and floor scrubbers... All so that travellers passing through the departure hall the next morning are completely unaware of what’s happening above their heads.’

From billboards to girders

Nico’s desk is covered with an impressive array of planning documents. The construction project is mapped out down to the smallest detail: from placing fences to dismantling billboards and installing girders. Keeping a firm handle on things makes it easy for Nico to curb any stress that might crop up. ‘We work in teams of 15 to 25 per night, and we’ve still got plenty of leeway in our planning for potential setbacks.’ That’s good news for Nico, as ensuring that the planning runs smoothly is one of his responsibilities. ‘As is making sure that everyone can carry out their work safely – and keeping an eye on the costs. So far, I have no reason to complain.’

Own little world at Schiphol

Throughout the entire construction process, the contractors work together closely with Schiphol. ‘It’s great to see how involved Schiphol is in this project,’ Nico says. ‘That’s not always the case with clients. Decisions get made quickly here, which helps us get things done on schedule.’ Sometimes, though, he’s so focussed on the work that he forgets about his surroundings. 'Around Christmas, a traveller was arrested for waving a knife around. We were literally right there when it happened, but none of us were aware of what was going on. In a way, a construction site is its own little world – even if it happens to be in the middle of Schiphol.’