With the redevelopment of Departures & Lounge 1, Amsterdam Airport Schiphol is creating more space for security and check-in. The security area is being expanded with a new mezzanine floor, but it is more challenging to build additional check-in lanes on the ground floor. That’s why programme manager Peter Flierman and process developer Janny Postma are taking a different approach. ‘Instead of more check-in lanes, we’ve opted to go smarter and faster.’ 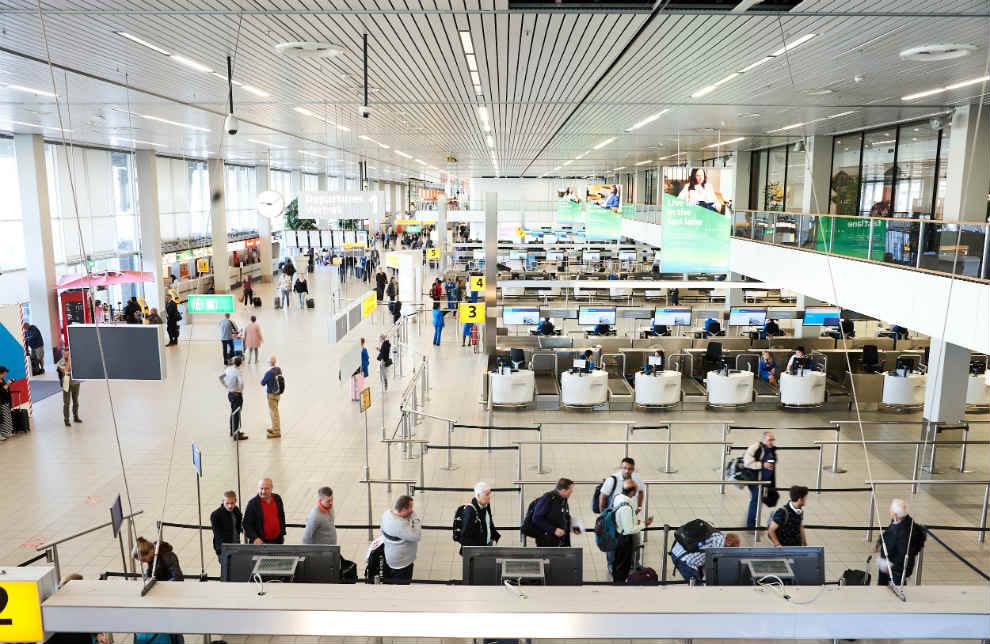 Departure Halls 2 and 3 already have self-service drop-off points: machines that let you weigh and label your cases yourself before sending them off to your plane. During the design phase and the renovation of Departure Hall 1, the idea was born to replace the ‘ordinary’ check-in desks with modern machines. ‘We did that for several reasons,’ Peter explains. ‘For example, research has shown that more and more people are keen to take control of their own travel process. These drop-off points help them do just that.’ ‘We initially wanted to install eight additional check-in desks,’ Janny adds, ‘but at the design stage we realised that it would be difficult to fit that many desks into the hall, especially when you combine that with our other plans, such as an 11-metre-wide area for passengers to walk through the hall.’

Processing your own cases

In addition to several staffed check-in desks, the renovated Departure Hall 1 will also offer an additional 20 self-service drop-off points. ‘At peak times they will help between 1,300 and 1,400 passengers get on their way,’ says Peter. ‘It’s a big white machine with a flap on the front. Once you’ve checked in, the flap will open and you can put your case into the machine. The device will then check the weight, size, safety aspects, etc., and of course it will also make sure your suitcase gets where it needs to go.’

Self-service as the norm

Although Departure Hall 1 will have some staffed check-in desks, self-service will be the norm for check-in rows 1 to 3. ‘The plan is for everyone flying economy to do their own check-in and baggage drop,’ says Janny. ‘Of course, there are exceptions. People who are not steady on their feet and people travelling with children or odd-size baggage will still be able to go to one of the ordinary check-in desks. Something like a surfboard won’t fit into the self-service drop-off point, and when your children are running around and you’ve got multiple suitcases, it’s good to know someone’s there to help.’

Janny and Peter understand that it could be stressful for many passengers to process their own baggage. ‘But it will soon seem normal,’ Janny assures us. ‘The first time you stick a baggage label on your own case may seem a bit strange, but by the time you get to suitcase number two it’s as if you’ve always done it that way.’ Passengers can of course also ask for help with the self-service process. ‘There will be enough airline staff members around to help,’ says Peter. ‘Think of it like the self-check-out at Albert Heijn. It’s a similar concept. You go through the steps yourself, but there’s always someone around to help if something doesn’t go as expected.’

Open to all airlines

To make it even easier, the self-service drop-off points will actually be called common use drop-off points or CUSSDOPS for short. ‘Common use means that, in principle, all airlines that fly services to Schengen countries and check in at rows 1 to 3 can use the machines,’ says Janny, ‘so we won’t set aside two machines for Lufthansa, another two for SAS, and so on. Passengers for any of the airlines will be able to use the machines, even for flights leaving at the same time.’ ‘That way we can distribute the rows much more equally,’ says Peter, ‘and adapt the airlines’ capacity to what is needed at that moment.’

Drop off your cases and go

Peter believes that the 20 self-service drop-off points will help Schiphol make significant gains in terms of efficiency. ‘Not only because we will distribute the rows more equally, but also because passengers won’t have to wait till a check-in desk is open before they can drop off their baggage. That means the machines are also great for people who arrive at the airport well before their flight leaves.’ According to Janny, ‘That actually happens quite often; people arrive several hours early and have to wait in the flow of Departure Hall 1, then everyone starts getting in each other’s way. Soon you will be able to just drop off your cases and head to security.’

From expansion to innovation

Although the Redevelopment of Departures & Lounge 1 began as a capacity project, in practice it is also creating opportunities for innovation. ‘We’re doing a lot of things in as smart a way as possible,’ says Janny. ‘Of course that includes the drop-off points, but we are also currently building stairs and lifts on the outside of the building to create more indoor space. We’re also working on new routes, so that passengers who have already checked in at home and are only travelling with hand baggage don’t have to go near the check-in desks at all. Soon they’ll be able to go directly to security on the mezzanine, which will reduce the pressure on the flow in the departure hall.’ According to Peter, ‘We’re actually hoping that these innovations will put an end to queues in Departure Hall 1 once and for all.’