News: Raising the flag on 5,000 tonnes of steel

Technical Lego for grown-ups. That’s how the Chief Commercial Officer of the Royal Schiphol Group, André van den Berg, refers to the superb framework of the new pier. The highest point of Pier A has now been reached, so it’s time for the topping-out ceremony, raising some flags and a special bonus for the construction workers. ‘I believe that with this pier we’re setting a new standard for airports.’ 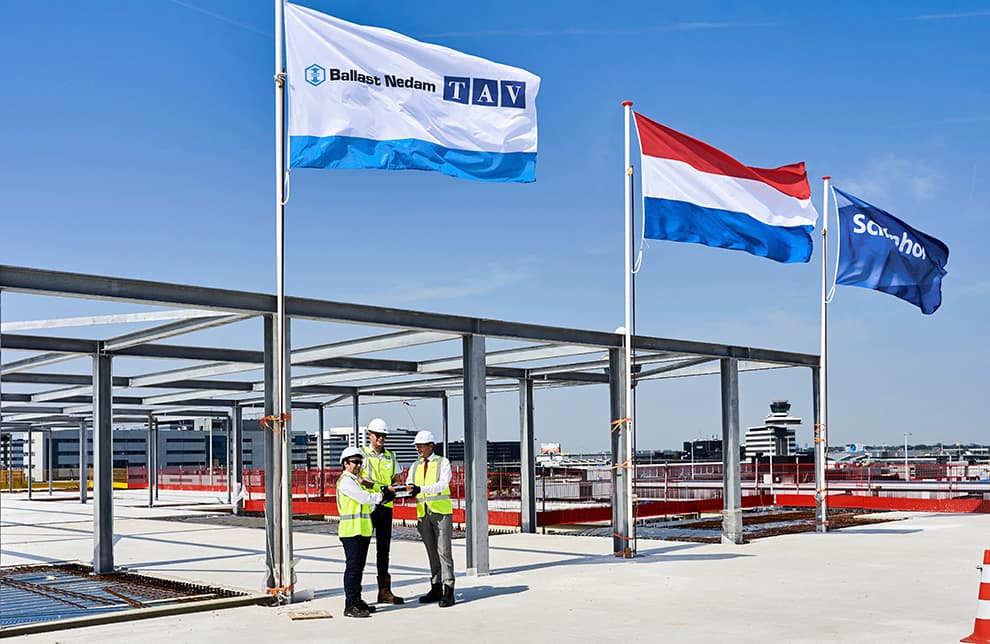 Devrim Omer, general project manager of Ballast Nedam and TAV Construction, held a short speech on 24 July in which he praised ‘the energy’ that you can sense at the construction site and the fine mutual cooperation. No less than 10 national and international stakeholders are getting this job done together. It’s a huge achievement. In his speech, André van den Berg proudly referred to the cooperation partners as ‘the A team’.

The construction of the new Pier A is not just another project. ‘This is an important milestone,’ says the Chief Commercial Officer, who is responsible for construction projects at the airport. This pier has 8 new gates, 33 lifts, 29 escalators and 15 moving walkways which together will welcome 14 million travellers every year. ‘This pier provides the maximum level of flexibility that a dynamic airport such as Schiphol requires.’

Following the speeches, a bus with VIPs sets off for the construction site to hoist three flags and to distribute the workers’ bonuses. We stand on the top level, look out over Runway 06-24 and can also see the air traffic control tower a little further away. The framework looks sturdy: it contains 5,000 tonnes of steel. ‘That’s the weight of 12 Boeing 747-400s with full fuel tanks,’ says André. ‘Strong foundations are important for ensuring the safety of this pier.’ Under the framework, 1200 pillars are anchored securely in the ground.

A large photo at the subsequent reception shows the future ultra-modern ambience of the new pier. ‘The facade will be made completely of glass, so that part of this framework always remains visible.’ But sustainability and innovation are also high on Schiphol’s wish list, so 5,000 m2 of solar panels will soon be glistening on the roof, the toilets will be flushed with rainwater and a heat/cold storage system will be used to heat and cool the spaces.

A little later the flags of the Netherlands, Schiphol and Ballast Nedam and TAV Construction are proudly flying in the wind on this sweltering day. After this, it’s time to take the bus back and to raise a glass with more than 200 attendees who are involved in the construction. ‘This project is really close to the heart of the Schiphol community,’ concludes André in his speech. ‘What’s more, it’s quite special to add a new pier to an airport that has already existed for a century.’