Lean back and relax during the construction industry holiday in Terminal 1? No way! Even during the summer months, we made great strides on the works at Departure Hall & Lounge 1. The new escalators and other works were completed at the end of July and a stunning new design has been approved for a significant upgrade of Lounge 1. 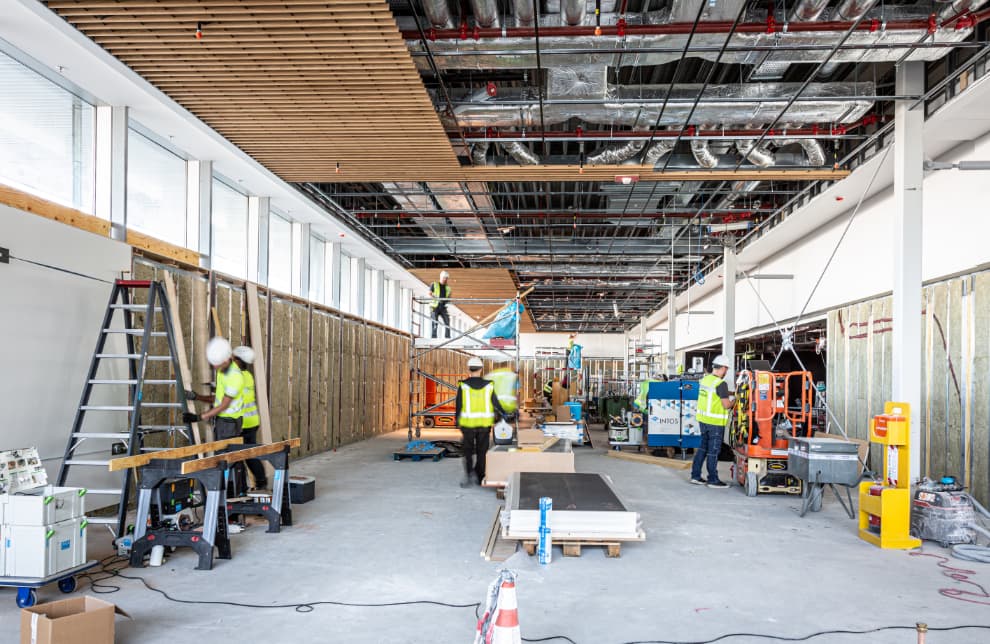 In the coming months we will be installing new escalators and stairs which will smoothly take passengers and day trippers all the way up to the third floor. The result of all of the construction works on escalators and staircases is a brand-new route to the Panorama Terrace.

The work on the new staff restaurant on the third floor is progressing steadily. Final works are being carried out, including installing the screed and the ceilings in the seating area. Next up is the installation of the interior and the kitchen appliances, with completion of the project fast approaching.

Even the former food and beverage facilities and meeting rooms on the third floor are slated to get a facelift: at Dakota’s, for example, a new floor screed has been laid. At the moment we are installing various shells, including cable ducts, supply cables for electricity and cables for the installation of the evacuation and fire alarm systems. Work is also being carried out on the sprinkler system.

In just over one month, in the early hours of 2 October, we will be opening the Temporary Security Filter (TSF). Installing the security lanes is a major operation: until 1 October we will be putting the final touches on the works and testing the equipment. We are also working on designing a new walking route for passengers moving from Departure Hall 1, via TSF, to Departure Lounge 1 in the future.

Work on the mezzanine

The area around the mezzanine is starting to look bare. The HMS host offices and the former staff restaurant are being stripped and cleared out and hundreds of cables and pipes in the area above La Place (at the plaza) are being rerouted.

This week the concrete was poured on the landing, which is at the rear of the mezzanine, above Security Filter 1.

In Departure Lounge 1 none of the construction works are visible, but that doesn’t mean nothing is happening behind the scenes! This summer, for example, we have decided to make additional quality investments resulting in an entirely new floor and additions to the available range of services in the departure lounge. The preliminary design is now complete, including an interior design and phased plan (read more in the interview). In the coming weeks we will be working on the details for the completion of the final design.