News: Light at the end of the Buitenveldert tunnel

You hardly ever see them, if at all, but that doesn’t mean they’re not there: the state-of-the-art technical installations that keep the Buitenveldert tunnel safe and secure, and Amsterdam Airport Schiphol accessible. No fewer than three years have been spent completing the work. We are pleased to announce that the tunnel has now been revamped and an opening permit has been issued. Since 1 May, the tunnel has been in compliance with the amended Tunnel Act. Time to celebrate this milestone!

Heat-resistant cladding, fans, escape routes, LED lighting, detection systems and 24/7 monitoring by the Control Centre in the terminal. These are only some of the new features of the completely renovated Buitenveldert tunnel. In the event of an incident in one of the tubes, the Control Centre will be able to close the tube in question in no time, alert emergency services and ensure that traffic is diverted. 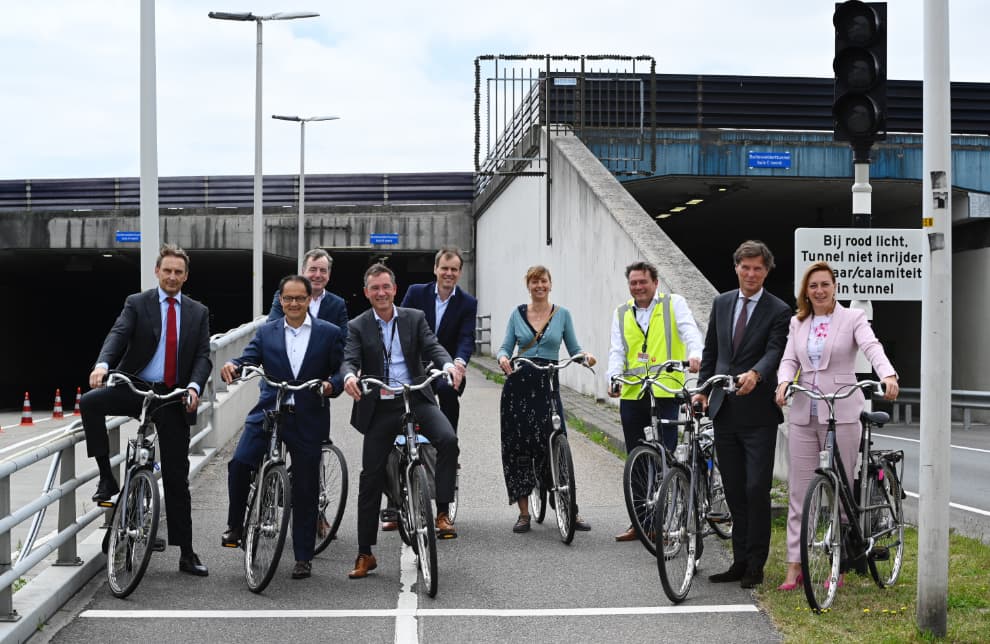 André van den Berg and Miriam Hoekstra (Amsterdam Airport Schiphol) and the representatives of the project team, the Environment Agency and contractor Vialis, cycle past the art that was unveiled moments ago in the bicycle tunnel

On Thursday, 27 June, about 50 guests gathered in the Brainbox bar at WTC Schiphol to raise their glasses during the official opening event. "At Amsterdam Airport Schiphol, safety comes first: in the air, on the ground, and now also underground," said André van den Berg, Chief Commercial Officer at Amsterdam Airport Schiphol, in his speech. "Thanks to all this smart technology, the Buitenveldert tunnel is now one integral and modern tunnel system."

The Tunnel Safety project was and remains complex: the tunnels must remain open at all times to keep Amsterdam Airport Schiphol accessible. Many stakeholders, both landside and airside, were involved. This is why the work was performed in stages, and intensive discussions were held with Connexxion, the airlines and handling agents and the Environment Agency. 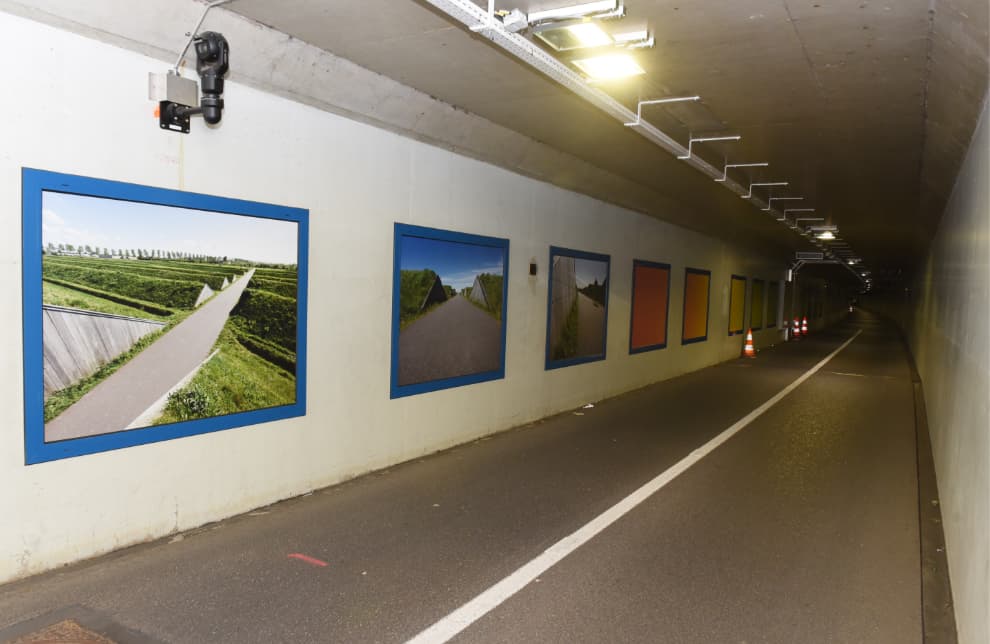 Ambience in the bicycle tunnel

Tunnel manager Miriam Hoekstra praised the work that was done in the Buitenveldert tunnel. As bicycle ambassador, she wanted to draw extra attention to the work of art that was placed in the bicycle tunnel. "How cool it is to add a little ambience to all the invisible work that you have performed together in the tunnel!"

After the speeches, the group took two buses to the Buitenveldert tunnel. Guests walked past the photos on the wall of the bicycle tunnel in a long line. The idea for the image wall was the brainchild of Hermine Stam. "As a cyclist in a relatively enclosed tunnel, the images provide some sense of the spaciousness of the outdoors with its windmills, cyclists, dikes and the waterways that surround Amsterdam Airport Schiphol.

The Buitenveldert tunnel is now ready for use and the work on the tunnel under Runway 06-24 is in its final stages. The safety systems will be tested this summer, after which this tunnel will also officially be opened. At this point, the project committee will formally hand over the baton to Operations. The new working method and all new systems combined form a great but serious challenge for the Control Centre and the accessibility team.