Rituals and Schiphol join forces once again to launch a multi-channel Christmas campaign with true impact: The power of collaboration

There’s something about travel during the holidays - the anticipation of returning home or visiting friends, decorations galore, and gifts to be bought, it all has a certain magic to it. It’s that special holiday cheer that Rituals Cosmetics, Schiphol Media, and Schiphol Marketing try to facilitate as best they can, year after year. We sat down with Melvin Broekaart, the director of Global Travel Retail at Rituals and Maarten van Maaren, the director of Schiphol Media, to discuss the Christmas campaigns rolled out for the upcoming holidays and the strong partnership that the two companies have built over the years. 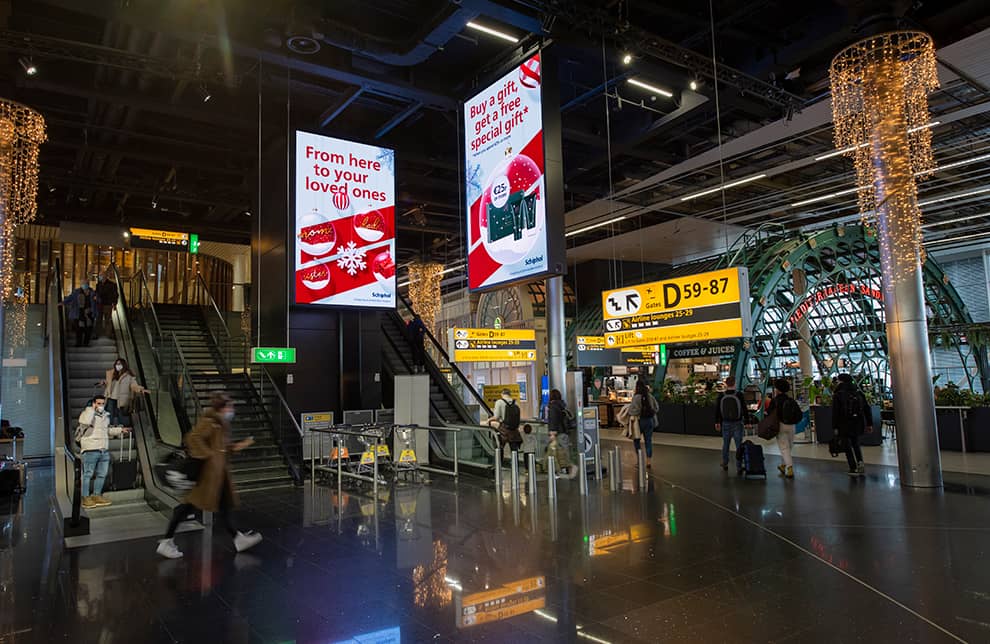 History of the collaboration

With a relationship that has evolved with time, the collaboration between Rituals and Schiphol is not one based solely on profit. These two brands are truly interested in making each other better. With multiple joint efforts on campaigns that bring together marketing, media & retail, ranging from experience to sales, it seems that this type of relationship is the key to success. Schiphol Media, Schiphol Marketing and Rituals facilitate a unique shopping experience for the passengers passing through the terminal. They do so with a great range of products and by accentuating the Dutch identity, the Dutch sense of place, so to speak, and creating an experience that makes shoppers feel good. “A long-term collaboration, like this one, creates a space with a lot of trust, which in turn translates into better results. It has a more natural flow that isn’t forced,” says Maarten. “I believe that its sincerity flows through onto the passenger.” 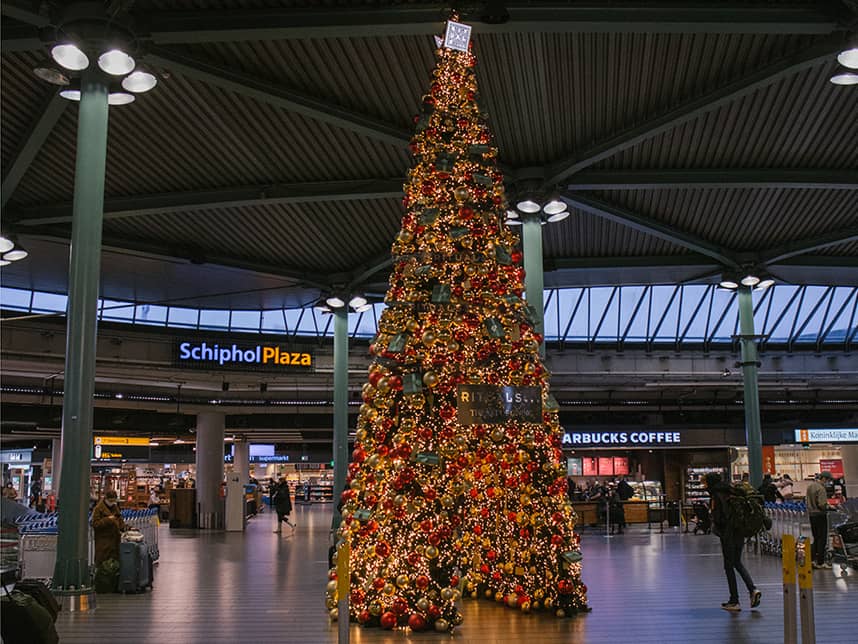 Time to start spreading the cheer

With Christmas being one of the peak travel times and the peak gifting season - it made perfect sense for Rituals and Schiphol to collaborate, resulting in the Festive campaign, a recurring campaign that has been on the go since 2018. This year’s iteration featured a multi-channel approach. Surprising 120.000 shoppers with a Rituals gift with purchase in all Schiphol shops along with a 10% discount coupon driving them back to the Rituals store, adverts on all the screens in the airport, branded Christmas decorations including a Christmas tree of over 8 meters tall, and a gifting trolley conveniently placed next to the Plaza tree during the Christmas shopping peak! Perfect for the last-minute shopper. The final hurrah is an Amsterdam Collection car perfume which will be gifted to 2500 travellers who parked their car at the P6 Valet during the end of December. All of these joint promotions were created to boost the feelings of Christmas, the Holiday spirit, and in turn, sales.

“Are we doing the tree again this year?” is a question that Melvin hears at Rituals a lot, often as early as May. “It’s something that everyone at the company gets excited about,” he utters. It might seem a little premature, but the preparations for the Festive campaign start early in the year. “Take Gift with Purchase; Rituals has to develop and produce these products. These processes take time,” concludes Melvin. In August, all advertisements, products, and plans are finished - ready for implementation in November. During the end of December, both parties evaluate and see what went well and where they can yet improve. It’s a continuous process. It also pays to get in on the action early, as advertising space and promotion spaces fill up quickly. However, the collaboration doesn’t end there. With campaign moments year-round, Schiphol aims to facilitate all media and marketing requests from their partners. 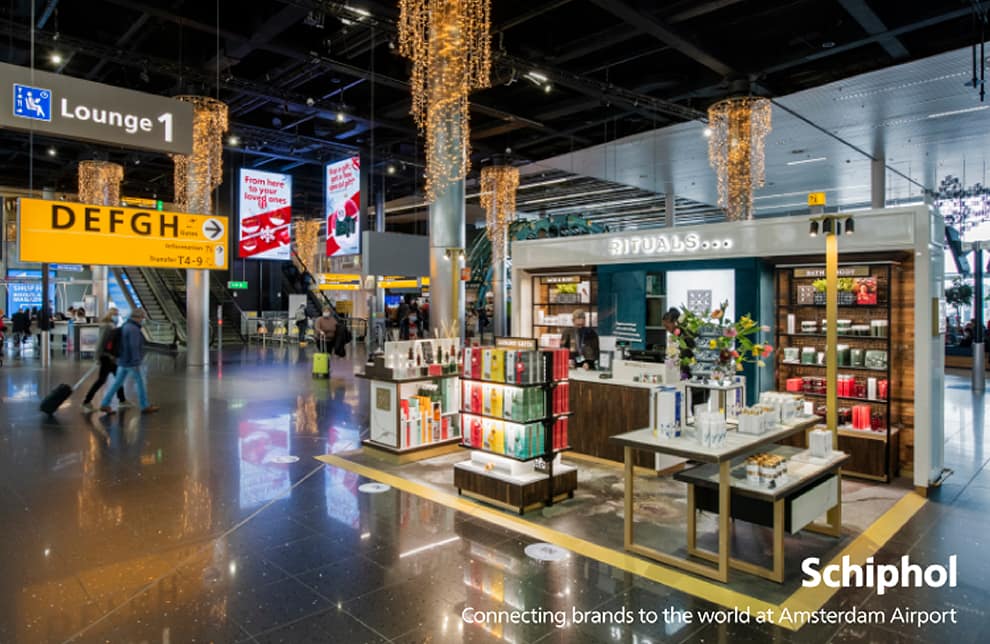 Seeing as the Holiday period is in full swing, there aren’t any final results yet. However, the initial response to the campaign is very positive and there has been a clear sales uplift. Despite the challenges faced due to the pandemic, Rituals and Schiphol have created an all-around festive campaign for the traveller - bringing cheer despite the difficult situation. It’s hard to tell what the future holds in uncertain times; however, what is clear is that Rituals and Schiphol are far from done working together. With a new Rituals store that just opened in Lounge 3 and more campaigns planned for the course of next year, these two partners will certainly continue to create even more memorable campaigns for Schiphol passengers and Rituals fans.

“I feel that we can go even bigger and better - continuing with this momentum. The partnership between Schiphol Media and Marketing with Rituals can be used as a blueprint in their growth strategy towards other airports.” Maarten explains. “I would love to help Rituals grow and elevate them; if I can do so by sharing our experiences, I will. Schiphol won’t profit from it. However, I feel that it’s the right thing to do. It isn’t a true partnership if you don’t want the best for each other.” He finishes off with a Dutch saying, “If you can't divide (or share), you can't multiply.” It is a sentiment that sums up this partnership quite well. A true collaboration between two invested parties is one to last.

The importance of joint efforts

Going further, together. It might seem cliché but the collaboration between Rituals and Schiphol shows that it is nestled in truth. By combining the power of media, marketing, and sales, Schiphol and its partners garner sales results instantaneously. With campaign possibilities that don’t only include the Holidays but year-round opportunities; think of Valentine’s day activation, Easter adverts, summer sales, or a campaign in between the big moments. Cross-collaborations between strong partners mean that activation can be implemented on a larger, more impressive scale. Schiphol is one of the few airports in the world that have kept their media in-house. Allowing them to venture beyond pure commercial motivations and to truly invest in long-lasting partnerships. Interested in experiencing this for yourself? Reach out and contact us via www.schiphol.nl/media for more information.