Bud lands in the Netherlands: The King has arrived

The moment has finally arrived: The King of Beers is here. Bud crossed the ocean, and is announcing its arrival from the rooftops. With a colossal campaign and a strategy aimed at urban twenty-somethings, the largest beer brand in the world expects to capture a unique position in the Dutch beer landscape. Sjors van Drie – senior brand manager at Bud – and Matthias Claes – global travel retail trade marketing manager for the beer – are working together on brand introduction. They discuss what it’s like to set foot on foreign soil. 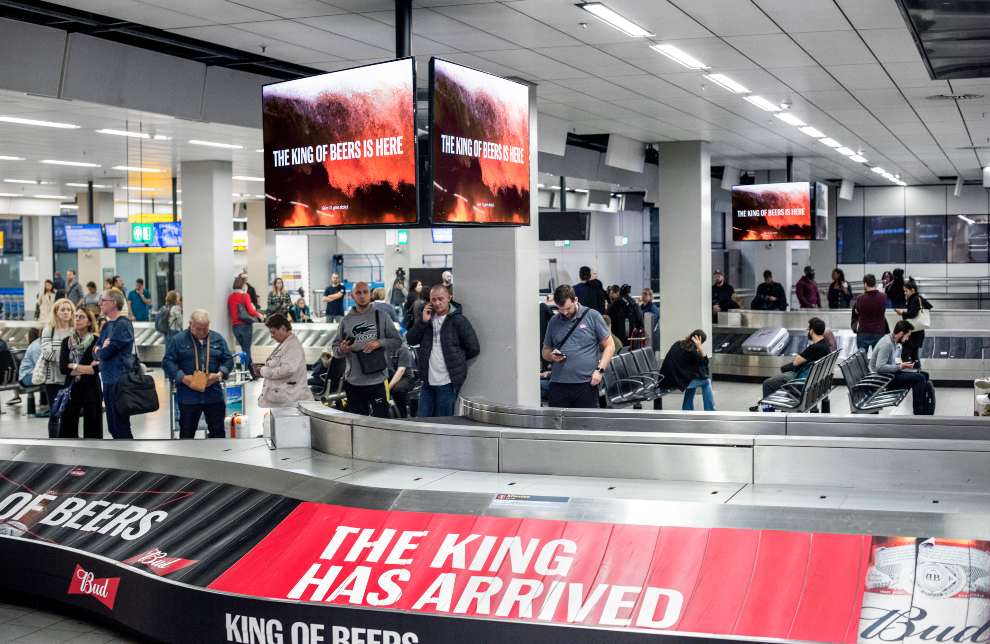 Bud is shaking things up

The Dutch love a good beer. Whether at the bar or from the fridge, they typically reach for a Dutch brand. The five largest brands in the Dutch markets are domestic. They taste somewhat similar to each other (relatively heavy and bitter), and have served the same target group for generations: primarily (white) men. But Bud aims to change all of that. That’s why the international brand, with its light, refreshing and distinctively smooth-tasting pilsner, is aiming at young people who go against the grain.

‘We are the King of Beers, and we believe that everyone has the potential to be a King, too. Greatness doesn’t come naturally – you have to earn your crown. So we encourage people to go all-out, and put endless positive energy into everything they do. That mind-set fits perfectly with our progressive target group.’

Rolling out the red carpet in the Netherlands

Bud is larger than life, and the name sparks imaginations all over the world. For its introduction in the Netherlands, The King of Beers is pulling out all the stops. The campaign is impossible to miss. Out of Home, on TV and online, the message is loud and clear: The King is Here. And it’s not just that confident message that embodies Bud’s greatness. The format of the expressions and the high-profile partnerships are also turning heads.

Becoming part of an urban culture

The Number 1 beer brand in the World has consciously chosen to not simply rest on its laurels and use its pure brand power to claim its place in the market. It could have chosen to loudly announce its arrival for a few months or paste its label at a few popular events. But that’s no guarantee of long-term success. To be truly successful, Bud is therefore working with inspiring talents and famous names in fashion, music and art. By focussing on local urban lifestyle events and partnerships, Bud is slowly seeping into the fabric of Dutch culture and proving that the brand is here to stay.

Bud also entered into another important partnership with Schiphol. Because before the brand established itself in the Netherlands, it wanted to make a grand entrance into the market. And where do renowned international visitors enter the country? Exactly. At the airport. It was a bold arrival, a major statement: The King has Arrived. Bud left its mark on every aspect of the arrival flow. A few of the most striking expressions? The takeover of various digital screens en route to the arrivals hall, two enormous billboards after customs, and – as a grande finale – various luggage reclaim belts branded in Bud’s characteristic red-and-black house style.

‘Talkability is key for this campaign, so we looked together with Bud at how we could create the biggest buzz for the brand at Schiphol. The grandiose expressions would certainly get people talking at any rate. But we also saw a lot of travellers taking selfies in front of the banners and light boxes with the “The King has Arrived” message. The branded luggage reclaim belts got all the attention in every reclaim area. We take it as a big compliment that Bud is now looking into branding opportunities in reclaim areas at other airports.

Keeping the momentum with retail

Now that the bold arrival in the Netherlands has taken place, Bud is focussing all of its energy on sales. Through nationwide campaigns, people are being encouraged to give the iconic pilsner a try. Consumers can find the beer in all Dutch supermarkets, and in 1,300 bars and restaurants. Of course, travellers can also be introduced to Bud’s smooth taste at Schiphol. The promos in and around shops at the airport can’t be missed in November and December.

‘Schiphol is one of the most important airports in Europe. The large number of visitors and striking media objects make it a premium promotional location, with all of the positive features of a mass medium. And when you add the creative freedom, proactive approach and operational flexibility of the media team, you have a recipe for success on your hands. This campaign, therefore, has exceeded our expectations on all fronts.’